Microbial degradation of propyzamide – will we have a problem?

Some excellent research conducted by Stephen Hole, under the watchful eye of Professor Steve Powles at the University of Adelaide in the mid-1990’s investigated the microbial degradation of propyzamide and another similar herbicide, carbetamide. Enhanced microbial degradation is where the soil bacteria that can eat a particular herbicide build up to very high levels so when the herbicide is applied it is broken down very quickly, effectively reducing the half-life of the herbicide.

Australians invented the lawn mower, rotary clothes hoists, plastic bank notes, WiFi, the electric drill, and five of the six harvest weed seed control (HWSC) techniques. And while the Canadians invented the chaff cart (to feed livestock) it was Australian farmers and researchers who started using it for HWSC. So we’re going to claim HWSC as a true blue Aussie invention too! We are the inventors of some of the key tools of HWSC and a recent GRDC grower survey has shown that we are by far the world leaders in the adoption of these practices.

Not so long ago harvest weed seed control (HWSC) was only used by a minority of early adopting grain growers, now it has gone mainstream and pretty soon just about everyone will be doing it.

Every few years GRDC fund a large grower practices telephone survey. The most recent survey was conducted by CSIRO in 2014, and they collaborated with Michael Walsh who at the time managed the HWSC program at AHRI (now at University of Sydney) to design the HWSC questions. Michael has now reported on the results in a recent scientific publication.

The survey revealed 43% of Australian grain growers are currently practising HWSC and this is set to double within the next five years. Narrow windrow burning is currently the most commonly used practice, with 30% of growers adopting this approach. While its popularity is booming now and probably will stay that way for the next five years, Michael says it’s unlikely to remain the frontrunner in the future. There are some new kids on the HWSC block that are being taken up by Australian grain growers, namely chaff tramlining and the integrated Harrington Seed Destructor (iHSD). 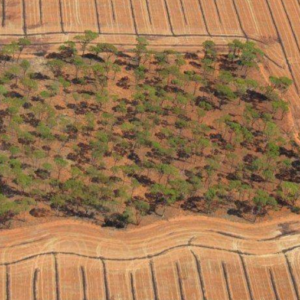