What if you accidently sprayed the wrong herbicide? Agronomists of yester-year developed a handy trick. They found that if they accidently sprayed an oat crop with Hoegrass® (diclofop-methyl), they could stop crop damage in its tracks if they quickly applied 2,4-D. The grand question is…does it actually work? The ‘myth’ says yes. What does the science say?

The AHRI Mythbusters team got the answer!

In this latest AHRI research, Dr Heping Han and others found that when they pre-treated ryegrass with 2,4-D amine it became resistant to Hoegrass®. This is likely due to 2,4-D causing a spike in P450 activity which enabled the ryegrass to metabolise (eat) the herbicide before it could reach the target site.

Meaning that 2,4-D stopped the effect of Hoegrass®.

They also found that this caused cross-resistance to Glean® (chlorsulfuron; ALS inhibitor). And, the amazing thing, this induced ALS resistance can be reversed by the application of the insecticide malathion.

2,4-D amine is known to induce cytochrome P450 activity. In this study, a very high rate (4000 gai/ha) of 2,4-D amine was applied to ryegrass 24 hours prior to spraying with diclofop-methyl. This high rate was used to obtain maximum effect for the purpose of this research, however, it is likely that lower rates may also cause the effect.

The ryegrass in the study was confirmed to be susceptible to diclofop-methyl as there were no survivors at the field rate of 375 gai/ha.

When this susceptible ryegrass was pre-treated with 2,4-D amine there was 71% survival at the field rate (see graph below). Further tests showed that this was not due to changes in uptake or translocation of the herbicide. 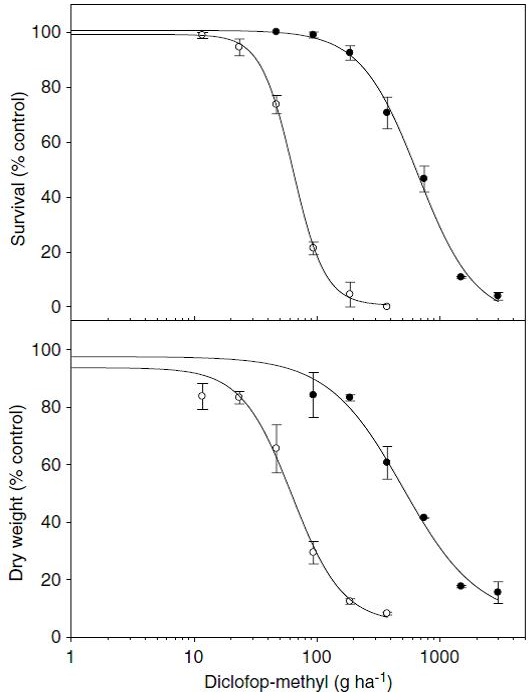 Figure 1. Diclofop-methyl dose response of the susceptible L. rigidum population with (closed circle) or without (open circle) 2,4-D (4000 gai/ha) pre-treatment. The experiment was conducted in a controlled environmental room under day/night temperature of 15/10°C. Each data point is the mean ± SE (n = 2).
When diclofop-methyl enters the weed it is de-esterfied into diclofop acid. This acid is the compound that kills the plant. In this case, two and four days after treatment, there was 1.8 fold less diclofop acid present in the 2,4-D pre-treated plants than the untreated plants. The pre-treated plants had broken down the diclofop acid into harmless metabolites faster than the un-treated plants. This is consistent with metabolic resistance caused by elevated levels of P450 enzymes that degrade diclofop acid.

When chlorsulfuron was applied to ryegrass at 100 or 200 g/ha there was a maximum of 5% survival. However, when ryegrass plants were pre-treated with 2,4-D amine there was 15% to 32% survival.

Malathion is an insecticide that has previously been shown to inhibit P450 enzymes. In this study, where ryegrass was pre-treated with 2,4-D amine and followed by malthion, chlorsulfuron resistance was reversed. However, malthion could not reverse the metabolic resistance to diclofop-methyl in this study. This suggests that perhaps 2,4-D amine enhances the expression of a number of P450’s, some of which can be switched off by malthion and some which cannot.

This basic research is part of a global effort to better understand metabolic resistance.