HomeArticlesDiflufenican resistance in wild radish is by P450s

Diflufenican resistance in wild radish is by P450s

In 1999 I was refuelling my car at a petrol station in Geraldton when I bumped into Dave, a technician with the local Department of Ag. Dave told me he had just returned from a trial where wild radish had survived 600 mL/ha of diflufenican (e.g. Brodal®). This was three times the maximum label rate and six times the common use rate at the time. I could see the entire lupin industry unravelling in front of my eyes.  Lupins were a huge success story on our sandplain soils in the area, wild radish was their main Achilles heel, and diflufenican was the best radish herbicide we had. Without lupins, our entire farming system was under threat.

Yet, twenty years later we’re still growing lupins successfully in this area and diflufenican is still a common herbicide in this crop. How’s this the case?

AHRI PhD student, Huan Lu, has now helped to describe the resistance mechanism which goes a long way to understanding how we are still using this herbicide. He found the first-ever confirmed case of wild radish with resistance to a herbicide likely due to P450 enzymes. We have talked a lot about P450’s in the past in relation to resistance in grass weeds, but there are only a few cases in the world of metabolic resistance in dicot (broadleaf) weed species.

The wild radish in this study by Huan Lu and others from AHRI had only 4.9-fold resistance and the insecticide malathion, a known P450 inhibitor, completely reverses this resistance. Metabolic resistance such as that caused by P450 enzymes is often lower-level resistance than other mechanisms such as target site resistance and this helps explain how we can still use diflufenican at robust rates and in mixes to achieve good wild radish control.

P.s. Dave and I went on to work together on weeds research at the Ag. Dept for many years. One day I left a message on his phone and voice to text took over. I said, “Hey Dave, it’s Newms here.” Voice to text converted that to “Hey babe, it’s New Years!” To this day he still calls me New Years and I call him babe!

The first step in this research was to plot the dose response curves of the resistant population that was collected by Mechelle Owen during the 2015 AHRI random survey of WA compared to a known susceptible.  The resistant populations clearly show a shift in the dose response curves below to both diflufenican (DFF) as well as another PDS herbicide, Fluridone. 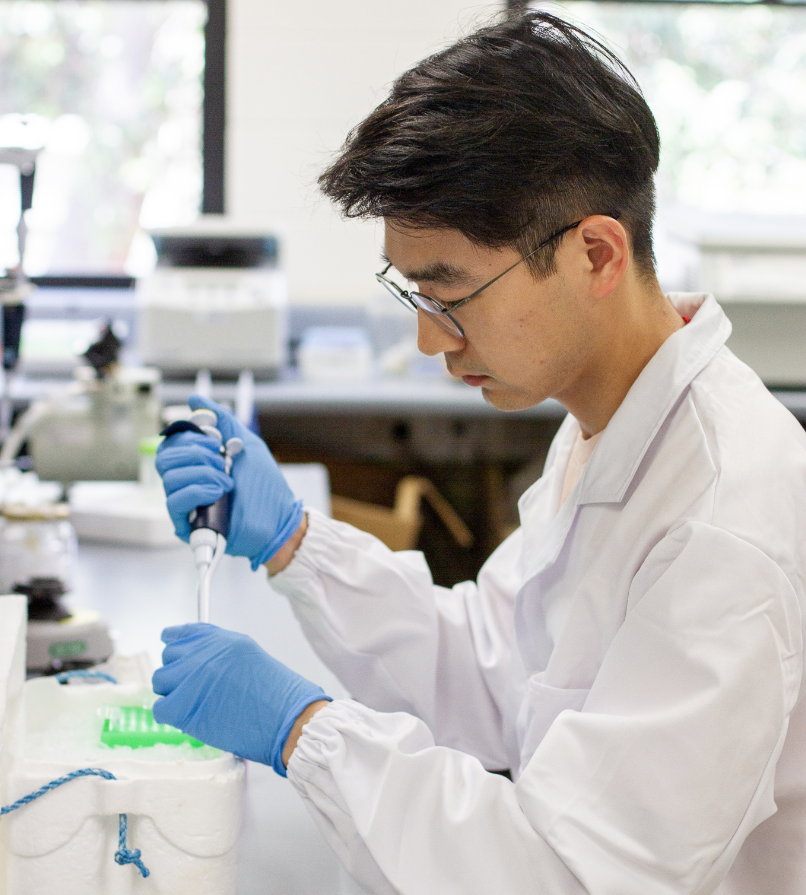 Huan Lu working in the lab at AHRI.

The dose response curves are then used to determine the LD50 of the resistant population compared to the known susceptible. LD50 is the lethal dose to control 50% of the population. By comparing the LD50 of the resistant with the susceptible we can see that we are only talking about 4.9-fold resistance to diflufenican. This is considered low-level in the world of herbicide resistance and immediately suggests to the researchers that they may be dealing with a non-target site resistance mechanism. This reflects what we see in the field more often than not and explains how we have managed to control wild radish with diflufenican by spraying small wild radish at robust rates, often in a mix with a PSII herbicide (e.g. simazine or metribuzin).

Table 1: Lethal dose to control 50% of the population (LD50) of susceptible compared to resistant wild radish populations for the herbicides diflufenican and fluridone.

P450 enzymes are likely the culprit

To determine if P450 enzymes were at play, Huan Lu used the P450 inhibitor malathion. Malathion is an insecticide that can ‘turn off’ some P450 enzymes. Wild radish was pre-treated with 1000 g/ha of Malathion just before spraying diflufenican and hey presto, all of the wild radish died as can be seen in the photo below. Malathion studies are a good way of determining if P450 metabolic resistance is at play but these studies are not always conclusive. For this reason, we can only say that P450 enzymes are likely the cause of this resistance.

This photo also shows that the growth of the resistant wild radish is significantly reduced by diflufenican and the common bleaching symptoms are present. This is what we commonly see in the field and is likely due to the relatively weak metabolic resistance mechanism.

Before you think you’re onto something and all we need to do is mix some malathion insecticide with diflufenican you should know that lupin biomass was halved by malathion + diflufenican. However, this does pave the way for more research to determine if there is a safe and legal P450 inhibitor that we could use to reverse diflufenican resistance in wild radish.

The researchers didn’t stop there. They needed to confirm that there were no other resistance mechanisms at play. They cloned the full coding sequence of the PDS genes in both the susceptible and resistant wild radish populations and confirmed no target site mutations or gene amplification.  These resistance mechanisms are of course possible in other populations but they have not been observed here.

So, what does this research mean?

This research helps us to explain what we have seen in the field for many years and keeps us well equipped to stay a step ahead of resistant weeds through using robust herbicide rates, on small wild radish, and mixing herbicides where possible.  This may also pave the way for more research in this area to look for safe and legal P450 inhibitors to reverse this form of metabolic resistance.  I thought I had the jump on the latest in DFF resistance in wild radish 20 years ago, and now I finally understand it a little more.