But if you’re an Australian farmer? It’s probably better to do the easy things.

Agronomist Chris Davey and the team at YP AG on the Yorke Peninsula in South Australia were determined to help their clients improve their ryegrass control through stacking crop competition tools with robust pre-emergent herbicide mixes. They were well aware that if the competition tools were too costly or complex, their clients weren’t likely to adopt them, so they focused on the tools that are easy to adopt in a trial near Paskeville in 2018.

By switching from wheat with a standard herbicide mix to a competitive barley variety, with a premium herbicide mix, sown east/west, they more than doubled grain yield and reduced ryegrass seed set potential by a whopping 95%. All of these tools are easy to adopt at relatively low cost and they made a big difference to both profit and the future seedbank of the farming system.

We are very grateful to Chris and the team for sharing these trial results with us and showing us how it’s done. They showed us that stacked crop competition doesn’t have to be hard, it can be relatively easy, and we should perhaps do the easy things first.

YP AG Agriservices Agronomist Chris Davey recently chatted on the WeedSmart Podcast about the trial results too. Take a listen!

The ryegrass at this site near Paskeville, on the northern Yorke Peninsula in South Australia, was big in number and you guessed it, very resistant.

As a result, the poorly competitive Emu Rock wheat sown with nil herbicide was low yielding and swamped with ryegrass. Chris Davey and the team from YP AG estimated ryegrass seed set potential by counting ryegrass tiller numbers, spikelet number and the average number of seeds per spikelet. 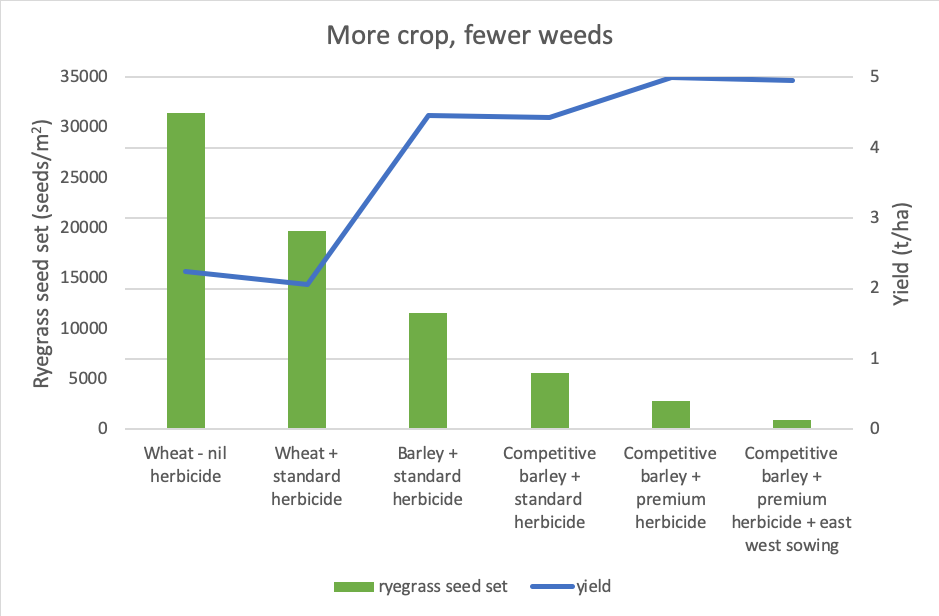 The chart above is a selection of some of the data from this trial that tells the story of stacking herbicide and crop competition tools. Now let’s break it down into the steps.

Adding the cheap, no-frills standard herbicide brew of trifluralin + Avadex to the wheat reduced ryegrass seed set by only 37% – clearly affected by the resistance to these herbicides at this site.

A further 50% reduction in ryegrass seed set just by switching to Compass barley which is known to be more competitive than Spartacus.  Adoption doesn’t get much simpler than switching varieties.

A further 50% reduction in ryegrass seed set by switching to Boxer Gold + Avadex, despite the fact that there is some resistance to both of these herbicides at this site.  Sure, there is an extra cost, but it is simple to adopt and the extra cost, in this case, is easily covered by an extra 0.5t/ha of yield.

A massive 69% reduction in ryegrass seed set. Ok, not every paddock lends itself to east/west sowing, but for those paddocks that do, it may well be worth the hassle of changing run lines.  What’s more, the cost of adoption is essentially zero. See an early edition of AHRI insight on this topic here.

There was essentially no difference in yield in the barley between N/S and E/W sowing, and this is consistent with past research.  However, the wheat sown E/W yielded about 0.5t/ha more than wheat sown N/S. This is likely due to the wheat having less competitive ability than barley and therefore benefiting from the extra competition that E/W sowing offers.

There was essentially no difference in yield in the barley between N/S and E/W sowing, and this is consistent with past research.  However, the wheat sown E/W yielded about 0.5t/ha more than wheat sown N/S. This is likely due to the wheat having less competitive ability than barley and therefore benefiting from the extra competition that E/W sowing offers.

What does that all add up to?

Crop competition didn’t matter much when the herbicides all worked, but it matters now.  The great thing about this trial is demonstrating that adding some relatively simple and cheap crop competition tools, in addition to robust pre-emergent herbicides, can make a huge difference to both crop yield and the weed seed bank. More crop, fewer weeds, by doing the easy things – which matches the AHRI slogan perfectly: “More crop, less weeds – sustainably!”