Imagine a weed that is so resistant to glyphosate, that when you apply glyphosate, it actually increases the growth of the weed. Heaven forbid! Fortunately though, this resistant weed has the fitness of a couch potato, and wouldn’t fight its way out of a wet paper bag.

Some resistant weeds are unfit. They just don’t grow as well as their susceptible cousins. And if they come up against a competitive crop, they’re particularly hopeless.

Other weeds have weak resistance mutations, so the herbicide still knocks them around, but they have no fitness penalty. For these weeds, herbicide plus competition can smash the weeds.

AHRI researchers recently teamed up with Martin Vila-Aiub from Argentina and other researchers from Brazil to investigate the combination of crop competition and glyphosate on glyphosate-resistant goosegrass. Competition alone from Soybeans reduced the growth of plants with the TIPS mutation by 95%, and the addition of glyphosate actually made these plants grow a little better!

For plants with the single 106 mutation, glyphosate reduced their growth by only 52%, but the combination of glyphosate plus competition reduced growth by more than 99%.

If weeds have either a fitness penalty, or low-level resistance, crop competition is likely to give them a belting.

Goosegrass (Eleusine indica) and soybeans were planted in pots according to the diagram below to simulate the right level of crop competition. 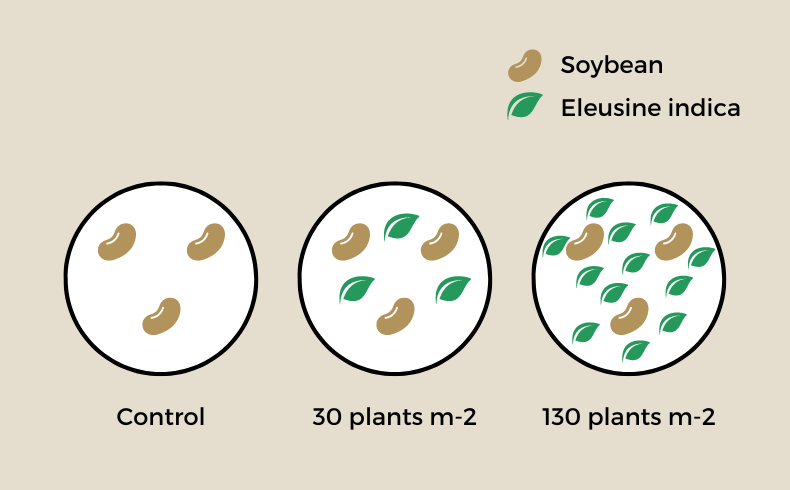 The effect of competition alone

In the graphs below, the white bars are the Wild Type (control plants with no glyphosate resistance mutation) and these are compared to plants with the single, 106 mutation (grey bars), and the double, TIPS mutation (black bars).

Without any competition from soybeans (on the left side) you will see that there is no difference in growth between the control and the single 106 mutation as these plants have no fitness penalty. But plants with the TIPS mutation have reduced growth by nearly half.

Now add some competition with soybeans and the biomass roughly halves for those plants without a fitness penalty, but the biomass of the plants with the TIPS mutation is smashed by 95%.

Lesson 1. Plants with a fitness penalty from herbicide resistance can’t handle the pace when a bit of crop competition is thrown at them. 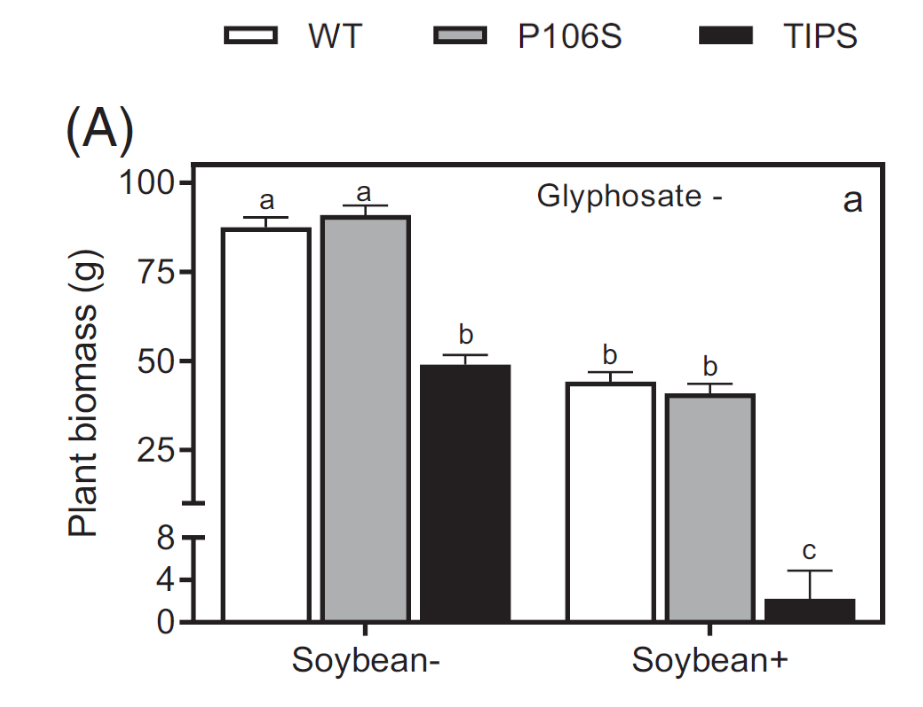 Now let’s add 2.4L/ha of glyphosate 450 to the mix. Without any competition from soybean, the single mutation 106 plants (grey bar below) suffered a 34% reduction in growth compared to the unsprayed plants above.

Now let’s take a look at the plants on the right-hand side of the graph below. The combination of competition and glyphosate has smashed the plants with the single 106 mutation, reducing their biomass by over 99%.

Lesson 2. Glyphosate + competition can be effective against weeds with weak resistance mutations.

Glyphosate does pretty much nothing to the TIPS plants so it is just the crop competition that is reducing their growth in the graph below. 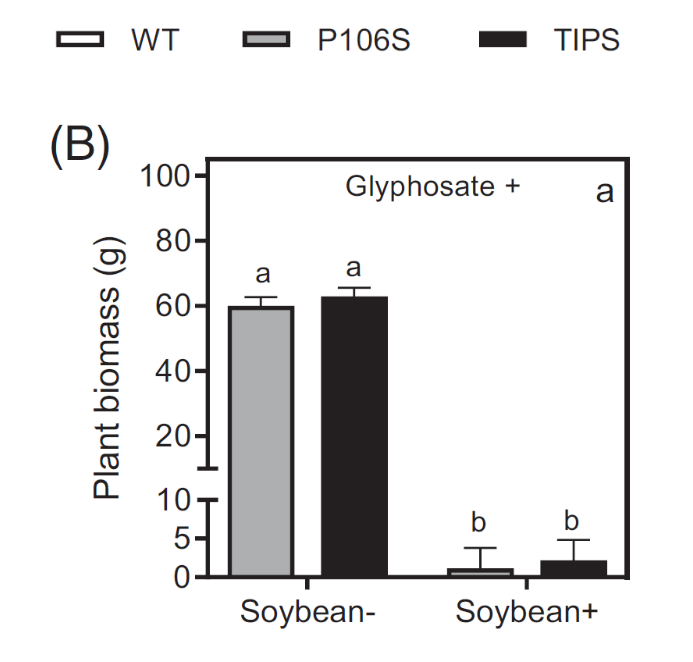