Evolution is pretty wild. A random mutation occurs, and if that is beneficial, the mutation becomes dominant over generations and the species evolves. Does it always happen in one individual and then spread, or can the same trait evolve in different places at the same time? The latter.

In this recent AHRI research, the same glufosinate resistance mechanism appeared in China and Malaysia at the same time.

Glufosinate (Liberty or Basta) is “the other” knockdown herbicide. We don’t use a whole lot of it in Australia at present, but we’re starting to with the release of Liberty Link crops that can tolerate the herbicide. Glufosinate has been used globally for about 30 years, but we currently have low levels of resistance to this herbicide. Global use of glufosinate is increasing in tolerant crops, and as a knockdown herbicide in countries where paraquat has been banned.

AHRI researchers Dr Qin Yu and Dr Heping Han recently teamed up with some visiting Chinese researchers to describe the glufosinate resistance mechanism. They found the same single point, target-site mutation, Ser59Gly in resistant Eleusine indica (Crowsfoot grass) populations from Malaysia and China. The plants had relatively low-level resistance, but given that this mutation evolved independently in different countries, it appears that this may represent a common target-site resistance mechanism to glufosinate.

Once again, our researchers put us in the fortunate position of understanding resistance to a herbicide before its widespread use in Australia.

When plants metabolise nitrogen, they use the reaction below to join Ammonia onto glutamate to form glutamine. The enzyme glutamine synthase is a critical part of this reaction. The herbicide glufosinate works like most other herbicides, it binds to an enzyme. In this case the enzyme is glutamine synthase. When this reaction stops, Ammonia builds up to toxic levels and the plant dies.

To confirm that the Ser59Gly mutation is the cause of resistance, the researchers use what is now a common lab technique to develop rice that contains that exact mutation using transgenic techniques. The photo below shows susceptible rice at the front with the transgenic rice at the rear at nil or 990g/ha of glufosinate. The low-level resistance is evident here as the glufosinate damages the resistance plants, but not enough to kill them outright. 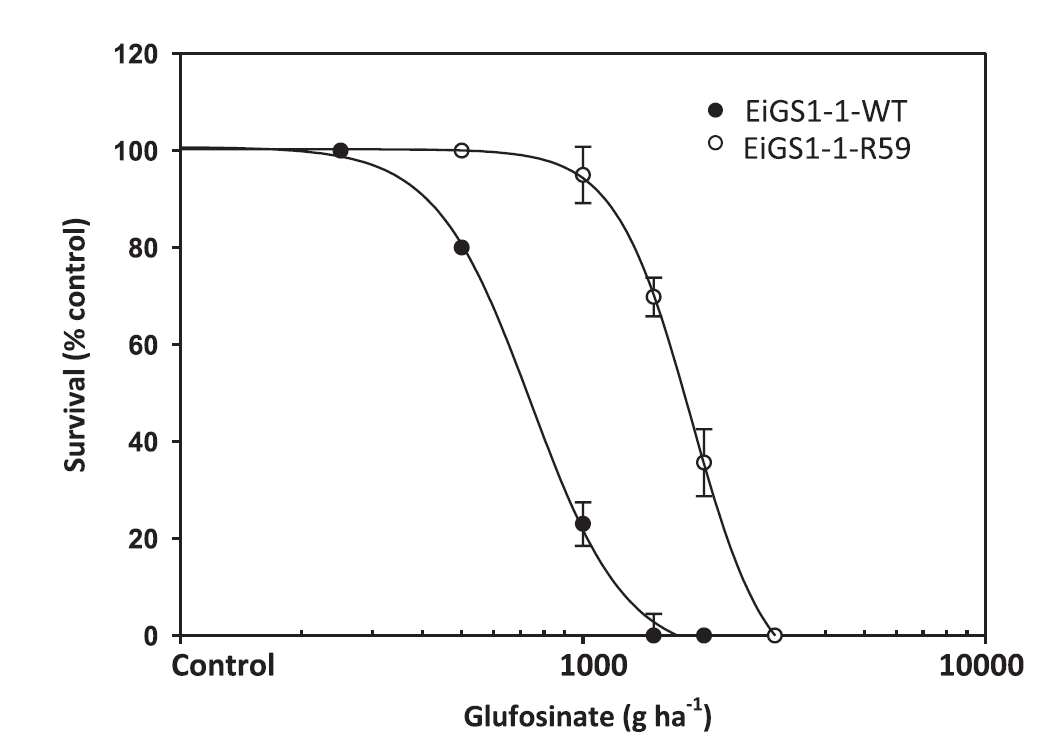 Glufosinate dose response of transgenic rice T2 seedlings expressing a single copy of EiGS1-1-R59 versus EiGS1-1-WT. Plants were treated at the three- to four-leaf stage, and survival rate was determined 3 weeks after treatment. Data are means ±SE of pooled results of three WT and three R59 lines.

Glufosinate could soon become a useful herbicide in Australia as we adopt glufosinate tolerant crops. It’s good to know that internationally, resistance to this herbicide is rare, and when we do face resistance issues we know where to start looking to determine the mechanism.