HomeArticlesLiDAR to detect and map tall weeds at harvest

LiDAR to detect and map tall weeds at harvest

I’ll never forget being in a crowded pub at Rottnest Island on a typical summer afternoon and spotting Luc Longley, former Chicago Bulls player, towering over the top of the crowd. Luc is 218cm tall, or 7’2” in the old money. He was as easy to spot as a wild radish plant in a wheat crop at harvest. There’s no hiding Luc in a crowd and there’s no hiding weeds in spring.

AHRI researcher, Dr Mike Ashworth, has spent years driving around the WA wheatbelt, spotting tall weeds sticking out of the top of wheat crops, wondering if there was a way to detect and map these weeds. He set out to develop just such a tool with help of other AHRI researchers, led by PhD Candidate Nooshin Shahbazi, in collaboration with Stealth Technologies. The team used LiDAR (Light Detection and Ranging) and found they could detect and map up to 97% of weeds that were sticking out of the top of a wheat crop. Not a bad effort for a first-up attempt!

Many weeds are patchy in nature, and often there are soil type effects that exacerbate this patchiness. If we could map weeds at harvest, we could potentially use precision ag processes to smash the weedy patches with the WeedSmart Big 6 and more.

LiDAR is a method for determining ranges (variable distance) by targeting an object with a laser and measuring the time for the reflected light to return to the receiver.

LiDAR is an acronym of “light detection and ranging” and is sometimes called 3-D laser scanning. This is the same technology that is used in speed cameras. We have to take the good with the bad I guess!

LiDAR is commonly used to make high-resolution maps like the one below.

In this study, the AHRI researchers teamed up with fellow UWA staff Nik Callow and Ken Flower plus a tech company called Stealth Technologies, to develop and mount a LiDAR system on the front of a harvester to detect weeds that were sticking out of the top of a wheat crop at Cunderdin, Western Australia. Weeds that were detected were logged and mapped. Dr Mike Ashworth is pictured below demonstrating the mounting of the LiDAR system with Dr Nik Callow. 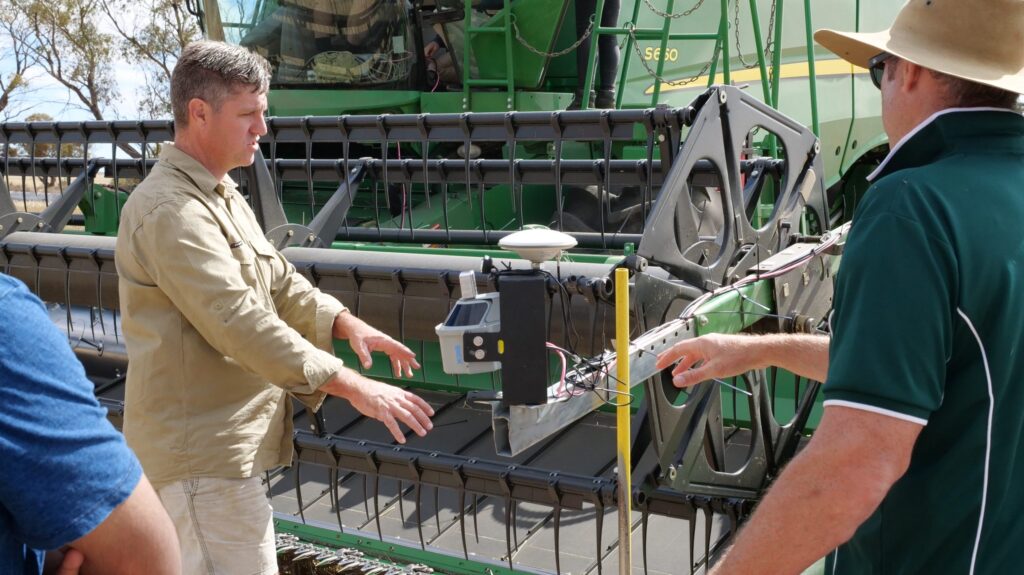 Dr Mike Ashworth demonstrating the mounting of the LiDAR system.

How tall do the weeds need to be?

This is a question that will be answered in more detail in time, and further development of the system may lead to reductions in the height differential between the crop and the weed required for the system to work. However, at this stage, it appears that weeds that are 0.2m or greater above the crop height are relatively easy to detect.

One of the challenges of this research is the number of false positive weed detections. The more sensitive the setting of the LiDAR, the greater the number of false positives. However, we must remember that this research is reporting on the very first field trial of the system, and while the weed detection has been very high, improvements in accuracy are likely.

This LiDAR system will create a weed map a little like the one below where the white boxes are nil weeds detected, and the colours yellow through to red represent higher levels of weed detection. The green dots show the detected known weeds, and the blue dots show the weeds that were not detected.

What we do with such a weed map is up to our imagination. Growers could vary herbicide and non-herbicide weed control tactics according to these maps to enable effective site-specific weed management, reducing costs and improving weed control.

Weeds are often patchy beggars, and we often find ourselves treating an entire field to ensure effective control in the weedy patches. We can do better than this in the future, and perhaps LiDAR is part of this solution. It’s early days with this technology, and the researchers in combination with Stealth technologies have made great inroads in a short space of time. Luc Longley could never hide in a crowd at the best of times, and he certainly can’t now with the likes of LiDAR technology scanning our every move.

GWN7 News published a story on this research.

Assessing the Capability and Potential of LiDAR for Weed Detection