What sort of person goes to a cocktail party and sticks strictly to beer?

A smart one! We all know that mixing drinks can hurt the next day.

We can’t say the same for herbicide mixing though. The smart farmers and agronomists are mixing two or more herbicides targeting the same resistant weed to delay resistance and maximise weed control, and the science is supporting this approach.

AHRI researcher Roberto Busi is a long-term advocate of herbicide mixing and in his recent paper which describes some computer modelling that he undertook with the help of Michael Renton, he gives more weight to the mixing argument.

They found that the best strategy was trifluralin + Boxer Gold, followed by trifluralin + Sakura in wheat, followed by propyzamide in Canola.  The modelling demonstrated this to be the best option for ryegrass control with no resistance evolving over 40 years compared to just rotating herbicides.  This strategy even held up well where there was some trifluralin resistance already present in the population in year one.

Mixing and rotating herbicides is best.

Mixing herbicides is not a new strategy. AHRI director Hugh Beckie has been a long term advocate of herbicide mixes for many years in Canada and now in Australia. Many years of research demonstrated to Hugh that a robust herbicide mix is another form of double knock. 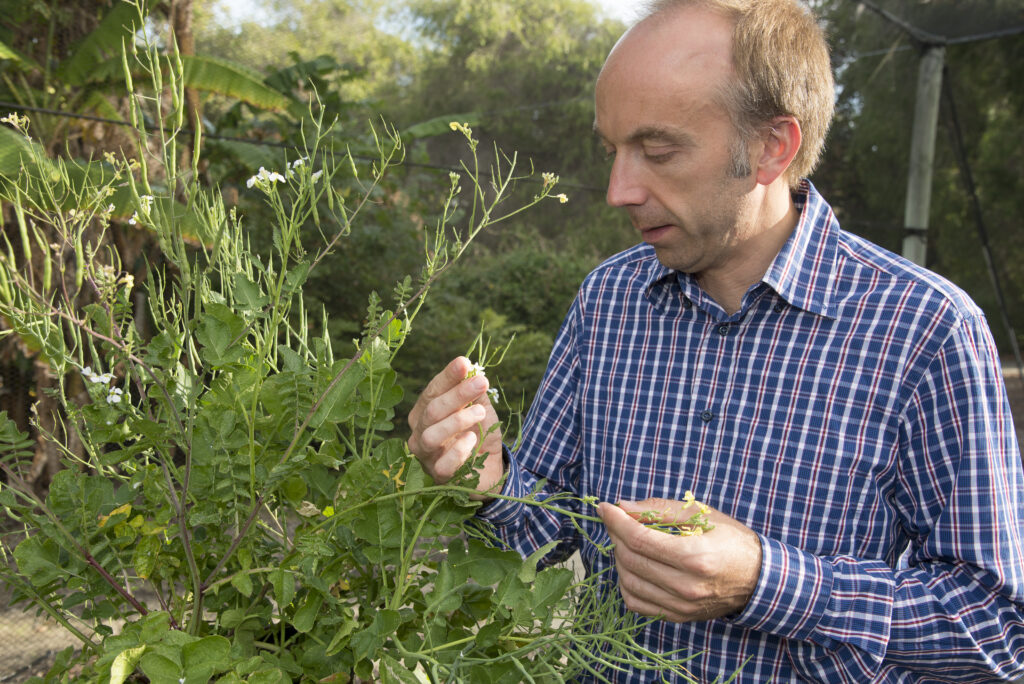 All models are wrong but some are useful

Some say that computer models give you the result that you’re looking for, and there is some truth in that (this model even has an acronym name to match the city it was developed in, PERTH!). However, models are the best way we have of predicting the future based on what we currently know. The PERTH model used in this study predicts the weed seed bank and resistance evolution to several herbicides and gets its assumptions from a wealth of research, hence the name Polygenic Evolution of Resistance To Herbicides (PERTH).

The model ran for 40 years and compared rotating herbicides with different mixing strategies of four ryegrass herbicides. They were…

The model compared rotations such as 1,2,3,4 (= trifluralin, Boxer Gold, Sakura, propyzamide). It also looked at a combination of mixes and rotation where M signifies mix e.g. M12 is a mix of trifluralin and Boxer Gold.

Modelling where no Trifluralin resistance exists

The chart below shows the weed seed bank and the predicted resistance evolution where no trifluralin resistance was present in year one. This chart shows that the standout winning combination was the four year mix and rotate strategy of M12, M13, 1, 4 (black boxes with dotted line) or the three year mix and rotate of M12, M13, 4 (yellow boxes with dotted line). 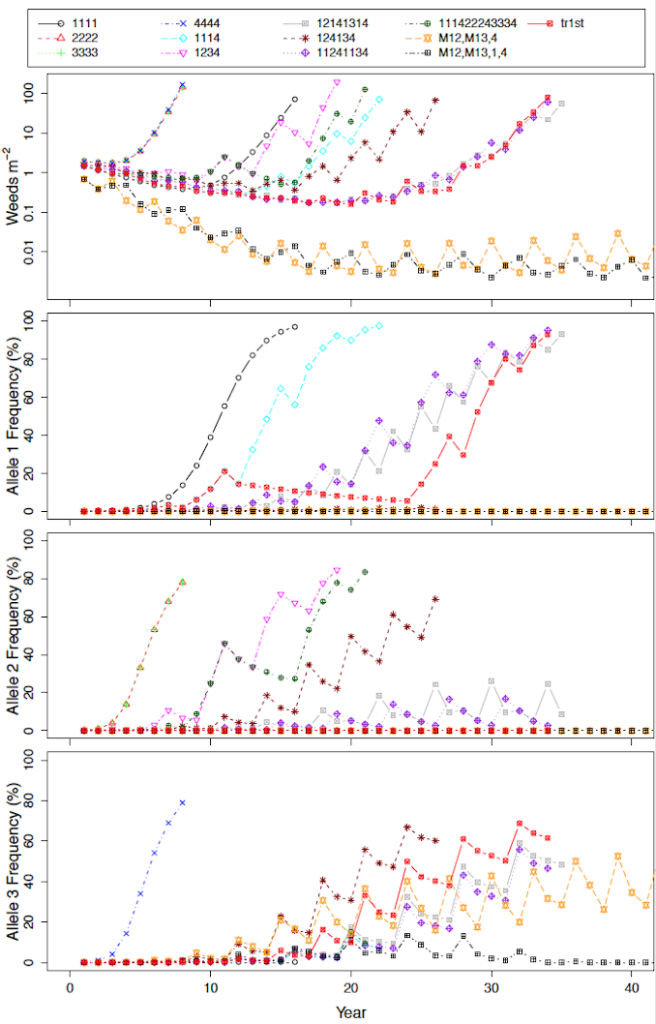 In the chart, Allele 1 Frequency (%) refers to the evolution of trifluralin resistance. Allele 2 is Boxer Gold resistance and Allele 3 is Sakura resistance. As there is currently no propyzamide resistance in ryegrass there was no prediction of resistance to this herbicide.

What about where trifluralin resistance already exists?

The chart below uses the same assumptions as the one above with the one difference that trifluralin resistance existed in this population in year one.  Mix and rotate wins again even where trifluralin was one of the mixing partners (light blue line). 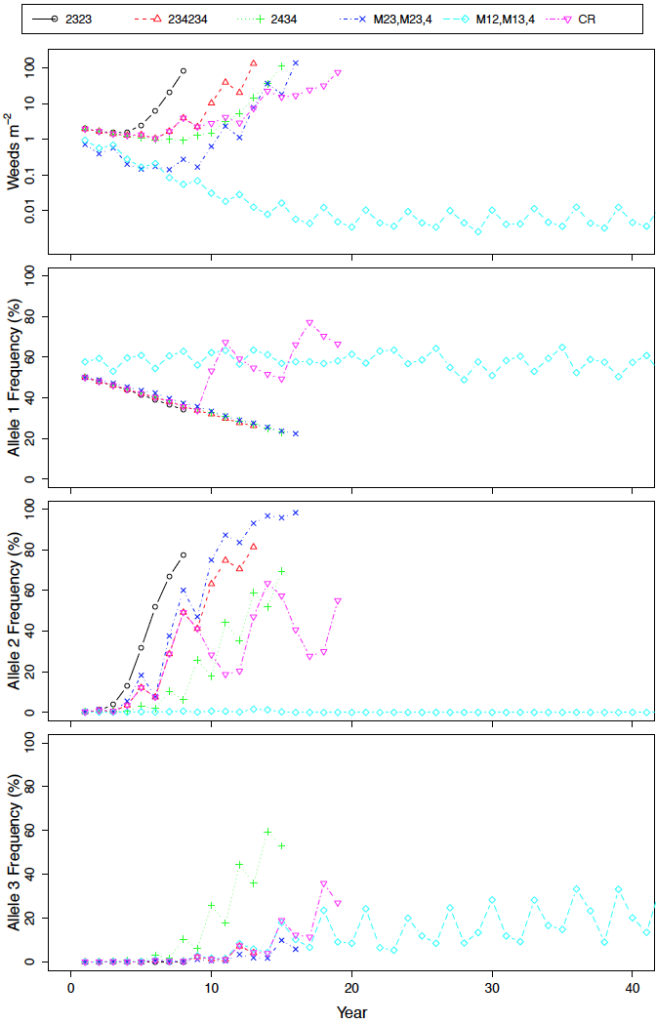 We understand that herbicide mixes come at greater cost than single herbicides, and it can be hard for farmers to commit to a mix where they are mixing with a premium, expensive herbicide. Part of the skill in choosing good mixes is to look at all of the herbicides available and use products that suit your budget. And the best way to work out if a mix is going to work? Herbicide resistance testing is the only way to go.

A new testing service that tests 20 herbicides and mixes of herbicides at low cost is now available and conducted through UWA. The service is available for agronomists and farmers across Australia, with the support of BASF (contact Roberto Busi for more information by phoning: 08 6488 1423, or send us an email at news-ahri@uwa.edu.au).

Once you know what your test results are, you can then sit down with your agronomist and develop a robust mix and rotated strategy that will give the best short-term weed control and the best long-term life from your herbicides. Mix and rotate.