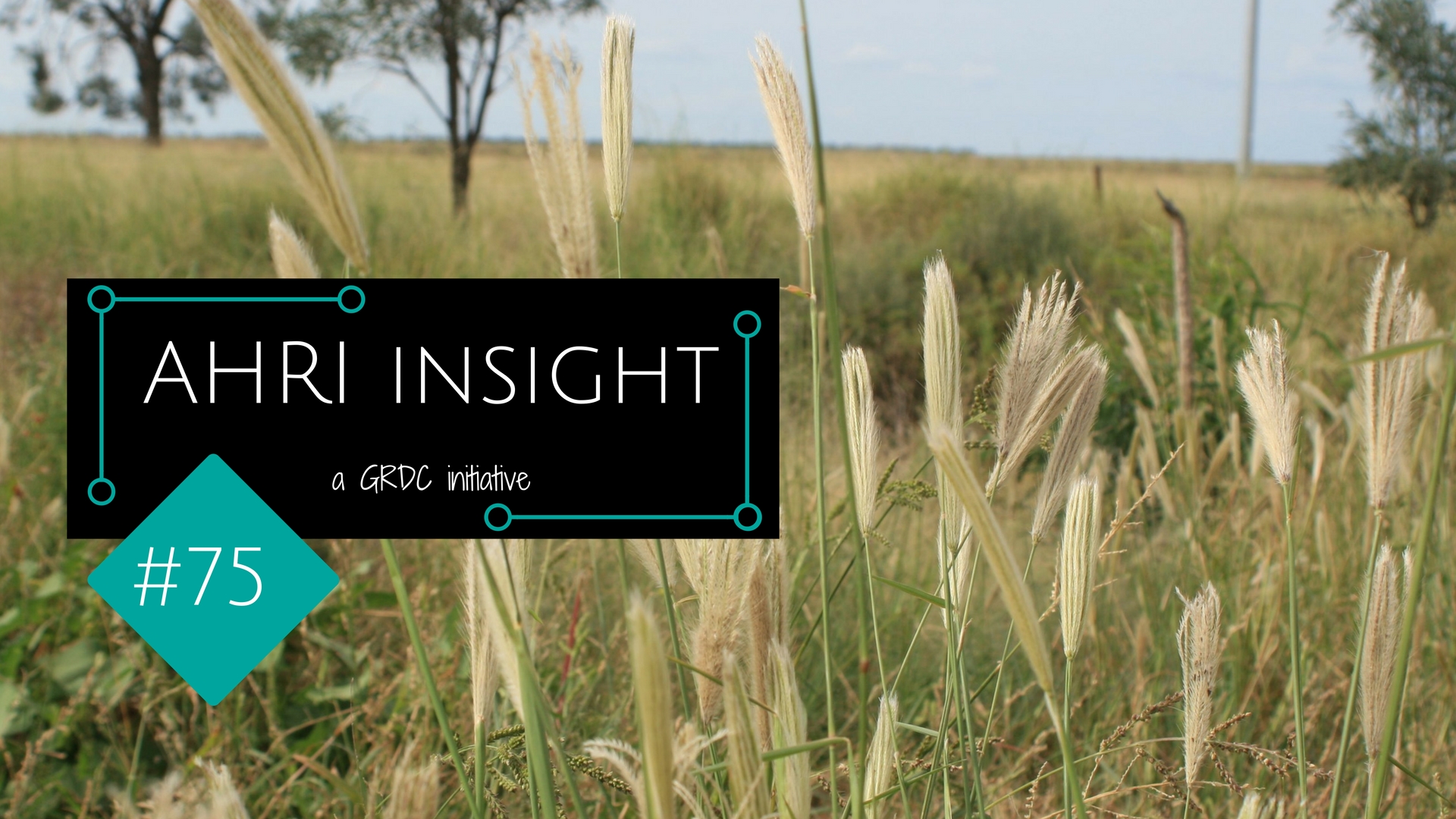 Feathertop Rhodes (FTR) Grass is the boy band of the weeds world. They pop up quickly from obscurity (first to germinate after rain), stress easily at the first sign of trouble (dry), and can be all done and dusted in 18 months (short seed life), not to mention that they are downright annoying as well!

If you think this is just a Queensland problem, think again.

This boy band, I mean weed, has risen to fame in recent years as it has spread from its home in Queensland to playing gigs on road verges all over the country.

When faced with an enemy we need to quickly understand its biology so we can exploit its weaknesses. The weakness of FTR appears to be its seed. It is small and short lived, like One Direction!

In this edition of AHRI Insight, we review the biology of FTR as studied by numerous scientists and compiled in a review by Darren Aisthorpe from Queensland Department of Agriculture and Fisheries (DAF QLD).

Feathertop Rhodes Grass on a roadside

Many researchers have contributed to understanding FTR over the years and it is now that we can benefit from this research. Let us consider some of the key elements.

Firstly, if you are from the southern states and haven’t seen this weed you might want to get to know it so you can do something about it when it turns up.

FTR seed is small, meaning that it won’t germinate from depth. The vast majority of seed will germinate from the 0-2cm soil layer. The zero till system in the north has played right into its hands. While tillage is not popular for many growers, it can be effective. Many growers in central Queensland have reverted to using strategic tillage, and many are finding it works well when used in combination with a pre-emergent herbicide applied prior to the next rainfall event.

Research by Vikki Osten (while working for DAF QLD) in Emerald shows that the vast majority of FTR seed survives for less than 12 months regardless of the depth of burial. In practice, many growers and agronomists have observed that 18-month seed life is typical in the field. Regardless of whether it is 12 or 18 months, it’s good news. If we put our mind to it and stop seed set for 18 months to two years we can get on top of a problem quickly.

FTR is extremely hard to kill with glyphosate at the best of times and if the plant gets stressed or too big it becomes nearly impossible to kill. The graph below shows exceedingly poor control of even small plants with 2L/ha of Roundup PowerMAX®. There are now resistant populations that will be a whole lot harder to kill than those represented in the graph below. This is the true challenge of FTR as there is no preferred/reliable knockdown strategy for this weed.

Many are using group A (Fop) herbicides in the knockdown mix, but resistance is a real threat with this group of products, so perhaps these herbicides should be saved for in-crop use. A second knock is a legal requirement if using Group A products in a fallow situation and strongly recommended for any other knockdown applications. Paraquat on very small grass can be effective, but it needs to be small and spray application must be excellent to hit the target. Reverting to tillage may be useful strategically but there are many issues that will arise if it is over-used. There’s no simple solution here, hence the emphasis on the necessity to target the seed bank. 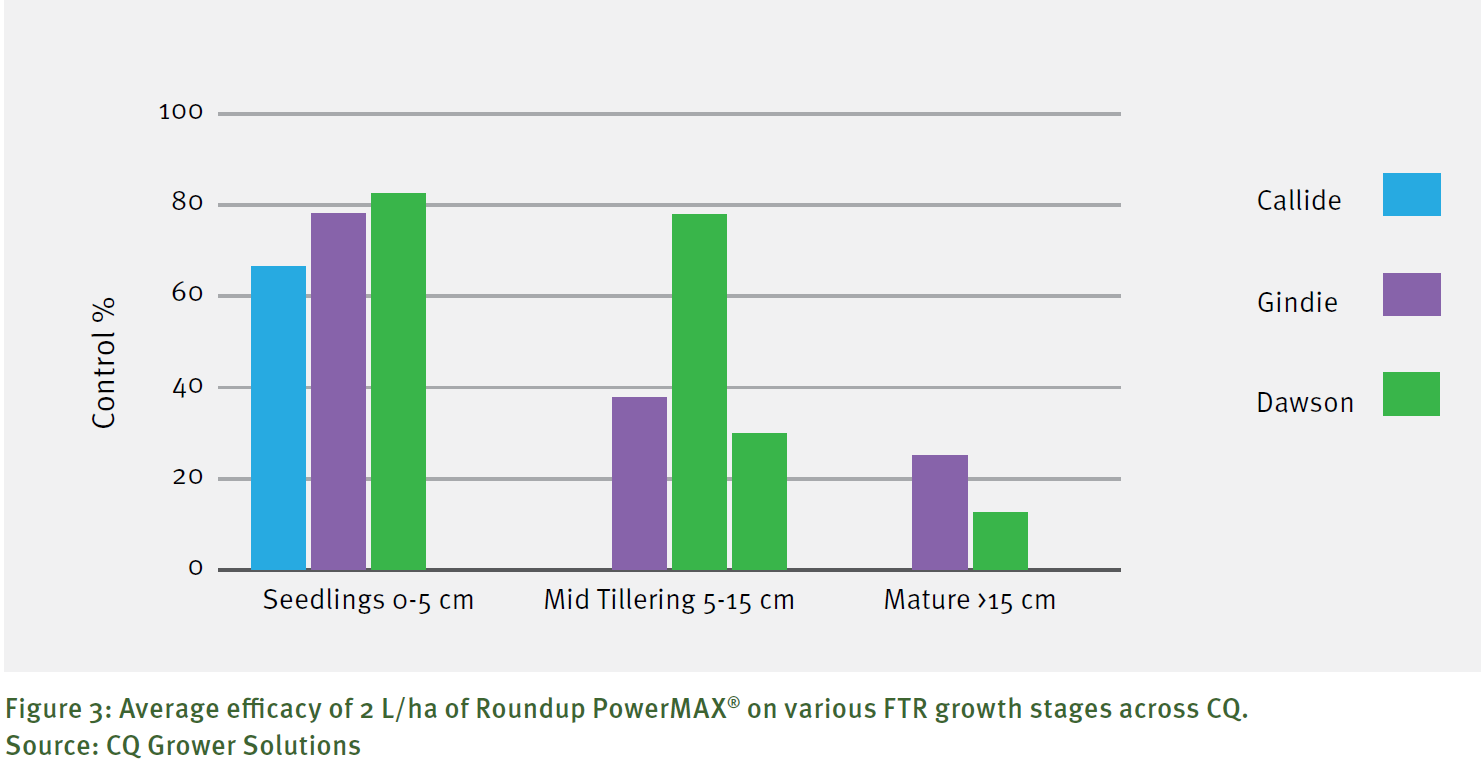 It’s a very showy plant, and whilst it looks bulky above ground, it’s only supported by a minimal and shallow root system. Strategic shallow cultivation can be extremely effective in dryer seasons and as mentioned earlier, combines well with pre-emergent herbicides applied after tillage and before the next rain.

The plant stresses quickly when conditions get dry and often shows stress symptoms before other weeds.

One of its more undesirable characteristics is its capability for producing viable seed at six weeks after germination in the right conditions. While we may only need to hammer it for a year or so to get on top of the seed bank, we may need to control it several times in that year.

There’s a whole lot more to controlling Feathertop Rhodes Grass than is mentioned above, but if we begin to understand the biology of this weed, we can work towards a robust plan that includes herbicide and non-herbicide tools. Unfortunately, FTR is not going to be a flash in the pan boy band. We’re probably stuck with it, but we can manage it if we understand the biology and make a plan that exploits its weaknesses. As with many other resistant weeds, it’s all about the seed bank!