How do you think a row of soldiers, lined up across the middle of the battlefield, wearing their poncie red coats would go these days? A little predictable! They wouldn’t stand a chance against guerrilla warfare soldiers dressed in shorts and double pluggers, who turn up one day and not the next, and use every trick in the book to be unpredictable (thanks Prof. Steve Powles for the analogy).

Weeds love predictable farming systems. If we do the same thing at about the same time each year, the weeds learn to adapt. Many Australian grain growers are now saying that weeds such as barley grass, brome grass and wild oats once germinated evenly with the opening rains, and now germinate later, avoiding the knockdown and early season herbicides. This has now been confirmed by some recent AHRI research led by Aniruddha Maity from Texas A&M University, and Roberto Lujan-Rocha and others from AHRI.

Part of the cause of this extra dormancy is that more dormant weeds have bigger seeds. This is true for barley grass and brome grass, however, there was a weaker correlation for wild oats.

Our predictable farming has played into the hands of the weeds. Can we exploit this adaptation to our benefit?

108 populations of weeds were sampled in 2018 just prior to harvest for this study. Their seeds were germinated on agar periodically in the nine months following seed collection to test for dormancy levels. Weed populations were taken from either:

These field populations were always compared to a “ruderal” population from an adjacent roadside, bushland, or fenceline.

The barley grass from 6 populations sampled from a continuous cereal rotation (blue line below) didn’t germinate at all in the 7 months following harvest, compared to the ruderal populations sampled from nearby roadsides, etc. (brown dotted line). This was the biggest dormancy adaptation result seen in this study. This continuous cereal rotation is more common in the lower rainfall regions of Western Australia and this result will come as no surprise to grain growers in this region.

Barley grass from the pasture and crop rotation (red solid line) were more dormant than the ruderal populations from nearby (green dotted line). 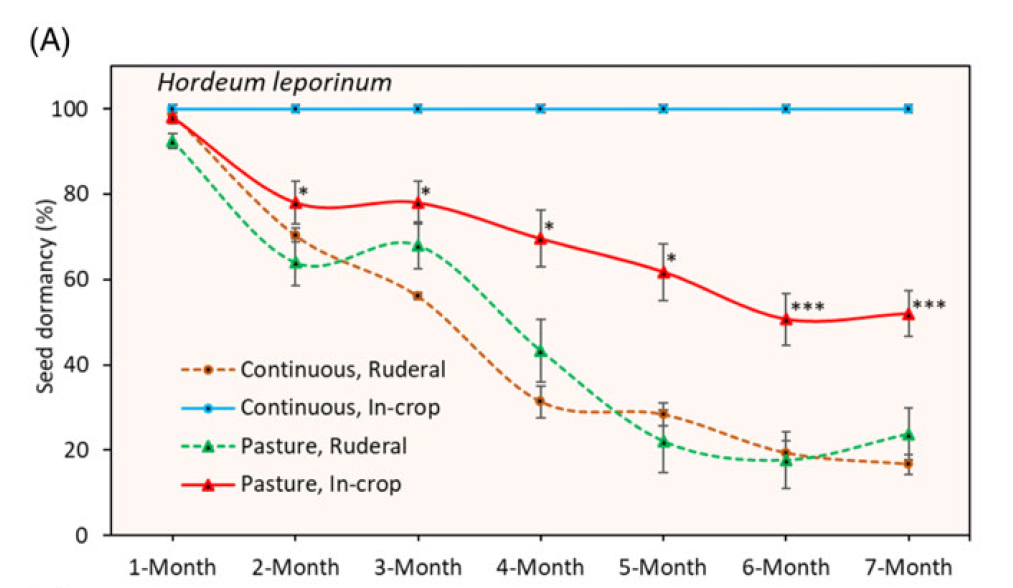 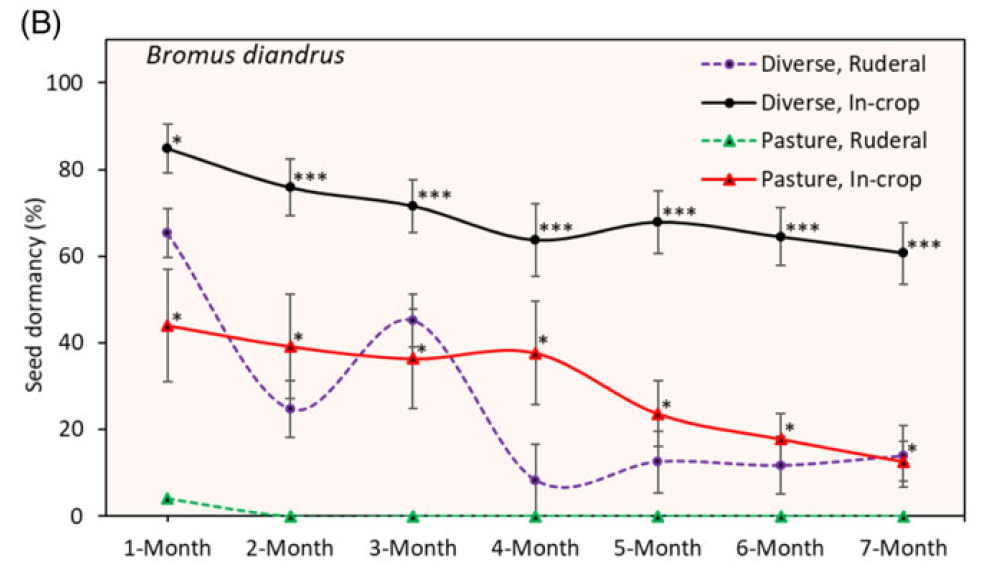 Wild oats from crop fields did have more dormancy than their ruderal counterparts, although this difference was only minor at 7 months after sampling for the continuous crop and the pasture and crop rotation. Wild oats from the diverse crop rotation (black line) were the most dormant. 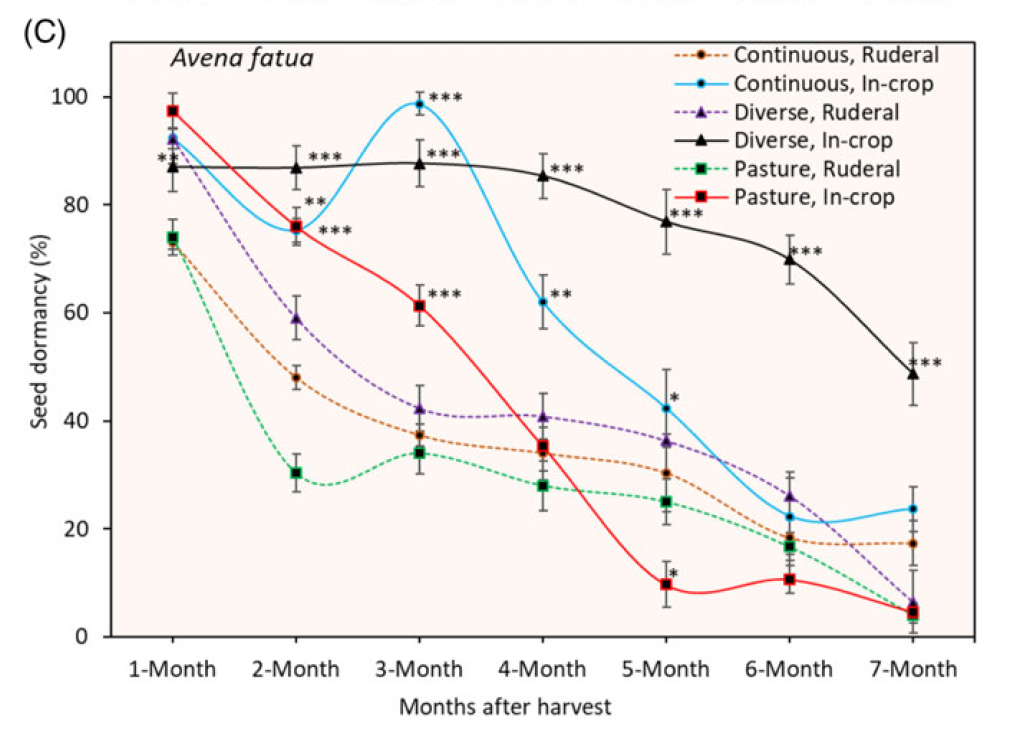 You know what they say about a person with big hands?

Barley grass from the pasture and crop rotation had 70% greater seed size than ruderal populations, and brome grass from crop fields had 26% larger seed. There was a strong correlation between seed size and dormancy levels for these weeds where larger seeds were more dormant (r2 0.79 to 0.85). Wild oats also showed a correlation but to a lesser extent. This phenomenon has also been observed for other weed species in the international literature.

It will come as no surprise that weeds from the most intensive cropping systems were not only the most dormant, but they also had the highest levels of herbicide resistance. No resistance was detected from the ruderal populations collected from fencelines and roadsides.

Weed survival (%) to a range of herbicides for three grass weed species.

Does herbicide resistance cause dormancy?

Probably not. It’s likely that high levels of resistance are a result of high cropping intensity. It’s this same predictable cropping system that leads to weeds adapting to increase dormancy to delay weed emergence to avoid exposure to herbicides. However, the paper did elude to studies where the resistance mechanism may cause changes to plant hormones (such as abscisic acid) which can have a direct effect on dormancy levels, but this is likely rare and not well understood at this time.

It has long been said that diversity is the answer to herbicide resistance, and we may now need to use the same thinking to help us manage other adaptations such as seed dormancy. Varying the timing of seeding for a given field will “keep the weeds guessing”, and perhaps practices at the end of the season such as swathing (windrowing), crop topping, and harvest weed seed control can exploit the fact that the weeds have germinated later and their seeds are more susceptible to the timing of control.