HomePublicationsHerbicide resistance across the Australian continent 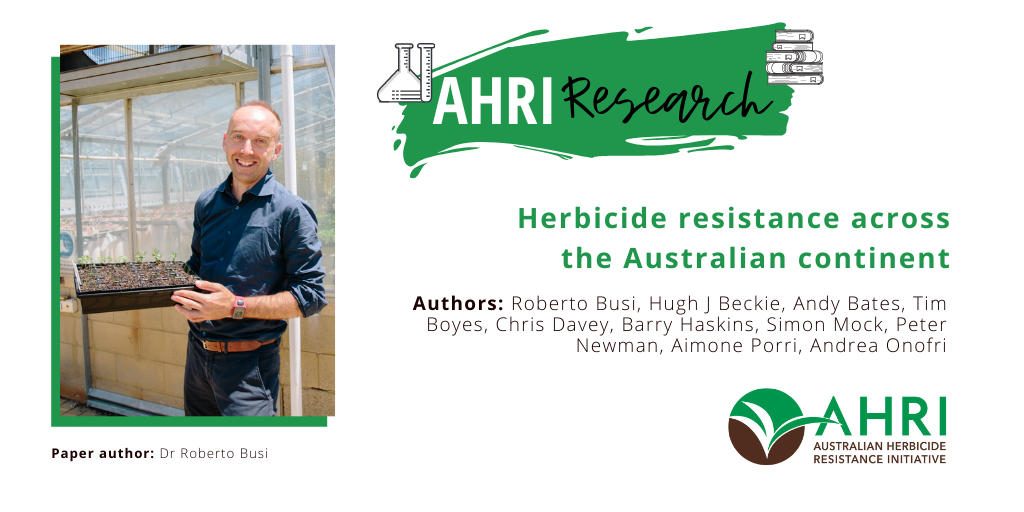 Lolium rigidum is the weed of greatest economic impact in Australia due to its formidable capacity to evolve herbicide resistance. In this study, 579 field-sampled L. rigidum populations were tested for resistance to 21 herbicides applied at the recommended rate. Nine herbicide treatments were binary mixtures.

A total of 15 876 individual resistance tests were conducted by screening two million seeds at the recommended label rate. The overall frequency of resistant populations was 31%, 14%, 71%, 6% and 0% in response to the post-emergence herbicide treatments clethodim, clethodim + butroxydim, imazamox + imazapyr, glyphosate and paraquat, respectively. The resistance frequency to stand-alone pre-emergence wheat-selective herbicides ranged from 10% to 34%. Conversely, the levels of resistance to pre-emergence mixtures or stand-alone propyzamide were significantly lower, ranging from 6% to 0%. In winter, the responses to glyphosate, paraquat, cinmethylin, prosulfocarb, pyroxasulfone and trifluralin were reassessed, with 7%, 0%, 0%, 21%, 21% and 28% as the respective resistance frequencies. South Australia and Victoria are identified as epicenters for L. rigidum population resistance to pyroxasulfone, whereas populations in New South Wales have the greatest resistance to glyphosate and in Western Australia to clethodim.

For the first time, resistance levels to stand-alone herbicides and binary mixtures are geographically ranked across the Australian continent by benchmark statistical analysis of resistance frequencies and distribution. The extension of these results will raise awareness of rapidly emerging patterns of herbicide resistance, encouraging the adoption of cost-effective modes of action and integration of diverse strategies for weed resistance management.