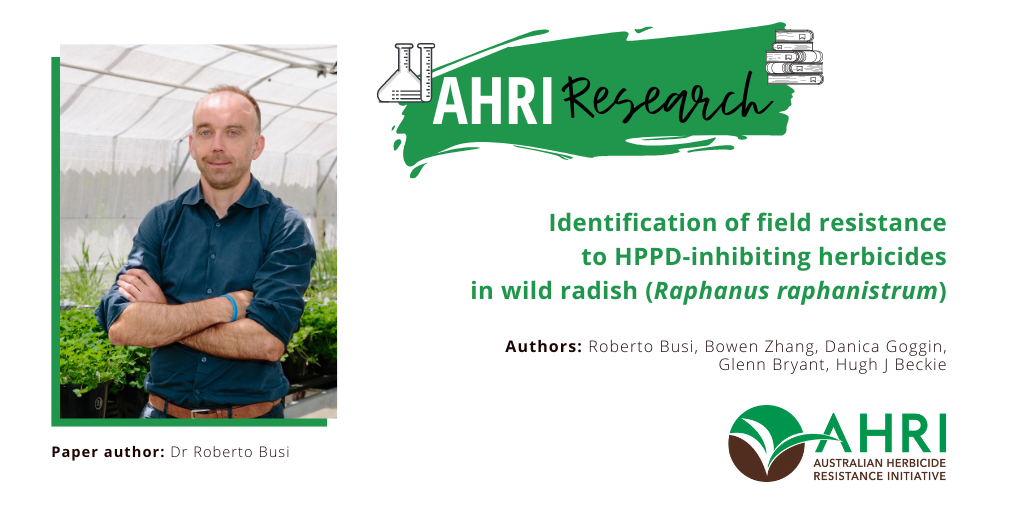 Two R. raphanistrum populations identified as putatively resistant to pyrasulfotole + bromoxynil in an initial large-scale screening trial were characterized and confirmed to be 5- to 8-fold (comparison of LD50 values) less sensitive than the susceptible control population to the HPPD inhibitor pyrasulfotole when plants were treated at the four-leaf stage.

The two pyrasulfotole-resistant populations exhibited up to 4-fold resistance to the co-formulated herbicide mixture pyrasulfotole + bromoxynil and up to 9- and 11-fold cross-resistance to mesotrione and topramezone post-emergence, respectively.

A small-plot trial was conducted in the field from which one of the populations suspected of resistance was originally collected. Pyrasulfotole + bromoxynil or topramezone + bromoxynil applied post-emergence delivered reduced R. raphanistrum control (79-87%), whereas mesotrione applied pre-emergence was >99% effective.

We report here the first case of field resistance to HPPD-inhibiting herbicides in R. raphanistrum, caused by 12 years of continuous reliance on that mode of action.

The mitigation of herbicide resistance in continuous no-till cropping requires a constant optimization of the herbicide technology via alternation and mixtures of multiple sites of action, use of pre-emergence herbicides, and ensuring post-emergence herbicides are applied to most sensitive plant growth stages.