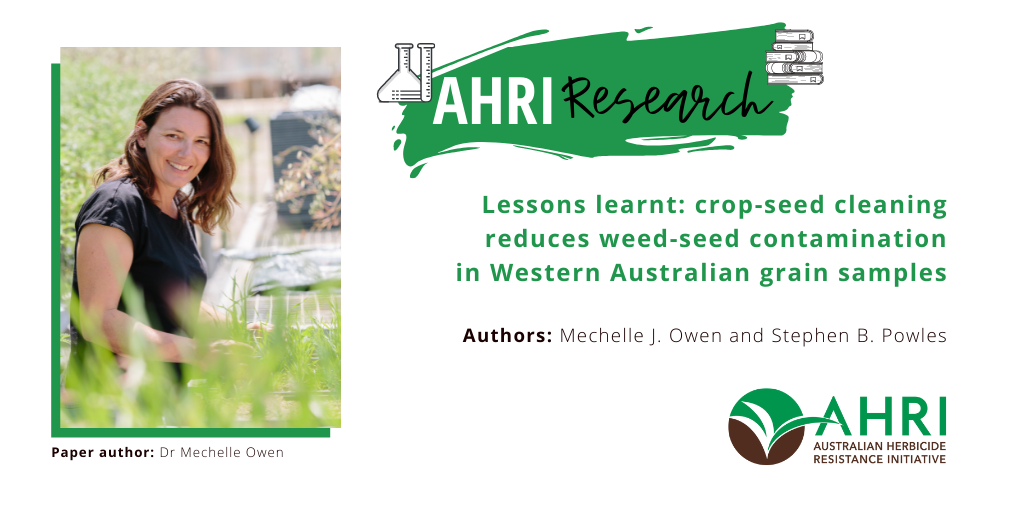 In this work, AHRI researcher Dr. Mechelle Owen surveyed and quantified weed seed infestation of the crop seed that farmers would be planting. In Australia, farmers save their own crop seed (wheat, barley, pulse crops, non-hyrbid canola) for planting in the subsequent growing season. Farmers produce their saved crop seed on low weed burden crop fields, so as to minimise weed seed contamination. This survey was done in 2015. This is the third AHRI survey, with the first conducted in 1998 (Powles & Cawthray 1999) and a larger second survey in 2009 (Michael, Owen & Powles 2010). In this third survey in 2015, Mechelle Owen surveyed 81 crop seed samples, each of 10 kg crop seed (wheat, barley, canola, lupins).

This research shows that farmers can ensure that they do not plant seeds of very dangerous weed species into crop fields. They can ensure zero to very low weed seed contamination by growing their crop seed on low weed burden fields and then ensuring that the subsequently harvested crop seed is commercially cleaned (gravity table). This is an integrated weed management technique to minimise weed and herbicide resistance issues. It is very pleasing that, as a result of these three AHRI surveys conducted since 1998 and associated communication with farmers and agronomists, farmers have reduced the amount of weed seed infesting their crop seed and thereby have reduced “planting” weed seed with their crop seed.