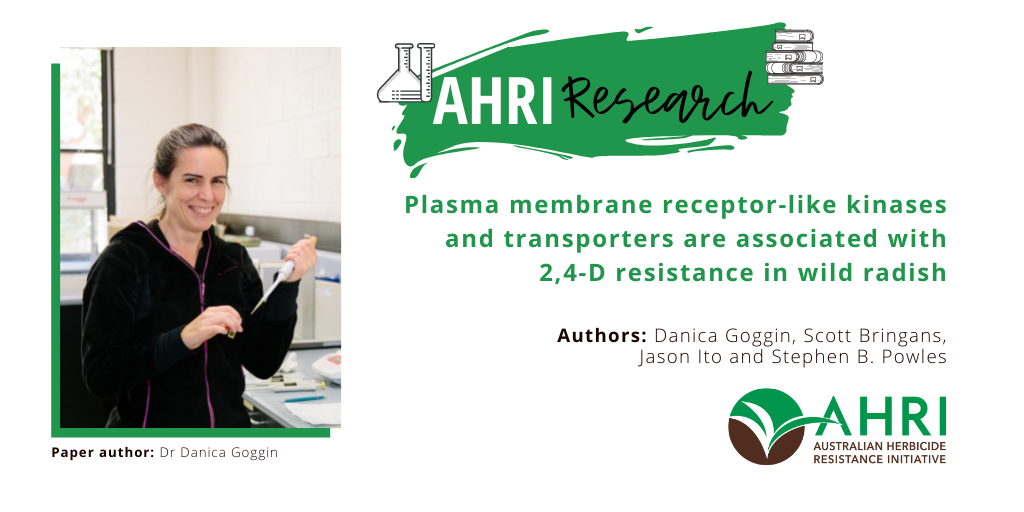 Resistance to the synthetic auxin 2,4-dichlorophenoxyacetic acid (2,4-D) in wild radish (Raphanus raphanistrum) appears to be due to a complex, multifaceted mechanism possibly involving enhanced constitutive plant defence and alterations in auxin signalling. Based on a previous gene expression analysis highlighting the plasma membrane as being important for 2,4-D resistance, this study aimed to identify the components of the leaf plasma membrane proteome that contribute to resistance. Key results included: two receptor-like kinases of unknown function (L-type lectin domain-containing receptor kinase IV.1-like and At1g51820-like) and the ATP-binding cassette transporter ABCB19, an auxin efflux transporter, were identified as being associated with auxinic herbicide resistance.

The variability between wild radish populations suggests that the relative contributions of these candidates are different in the different populations. To date, no receptor-like kinases have been reported to play a role in 2,4-D resistance. The lectindomain-containing kinase may be involved in perception of 2,4-D at the plasma membrane, but its ability to bind2,4-D and the identity of its signalling partner(s) need to be confirmed experimentally. ABCB19 is known to export auxinic compounds, but its role in 2,4-D resistance in wild radish appears to be relatively minor.