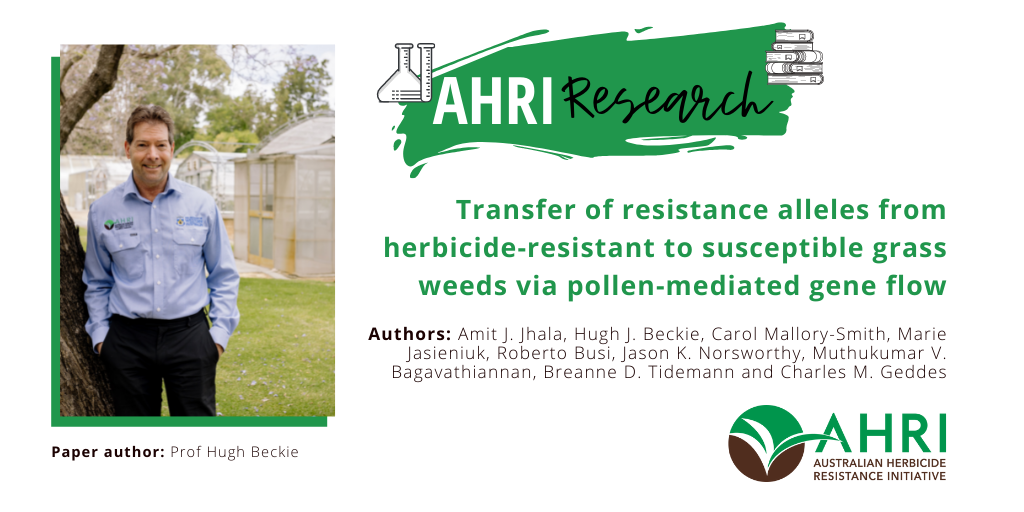 The widespread occurrence of herbicide-resistant grass weeds is at least partly due to PMGF, particularly in obligate outcrossing species such as rigid ryegrass.

Creeping bentgrass, a wind-pollinated turfgrass species, can efficiently disseminate herbicide resistance alleles via PMGF and movement of seeds and stolons.

The genus Agrostis contains about 200 species, many of which are sexually compatible and produce naturally occurring hybrids and hybrids with species in the genus Polypogon.

The self-incompatibility, extremely high outcrossing rate, and wind pollination in Italian ryegrass clearly point to PMGF as a major mechanism by which herbicide resistance alleles can spread across agricultural landscapes, resulting in abundant genetic variation within populations and low genetic differentiation among populations. Italian ryegrass can readily hybridize with perennial ryegrass and rigid ryegrass due to their similarity in chromosome numbers (2n = 14), resulting in interspecific gene exchange.

Johnson grass, barnyard grass, and wild oats are self-pollinated species, so the potential for PMGF is relatively low and limited to short distances; however, seeds can easily shatter upon maturity before crop harvest, leading to wider dispersal.