HomeArticlesSelfish weeds can manipulate the nitrogen cycle to suit themselves

Selfish weeds can manipulate the nitrogen cycle to suit themselves

Weeds are selfish, self-centred, narcissistic, manipulative pieces of work that will do whatever it takes to make themselves look good and make the other plants around them look bad. If they had their own Facebook profiles they’d be full of selfies of the weeds looking a million dollars and the crop around them looking dreadful.

Some weeds are so self-obsessed that they can manipulate the soil nitrogen into a form that is just the way they like it.

New research by Dr Cathryn O’Sullivan from CSIRO (pictured top right), is showing that some weeds release chemicals from their roots that slow down the bacteria that are essential to the nitrogen cycle, retaining nitrogen in the ammonium form that weeds can potentially take up faster than crop plants. Totally selfish!

Wild radish is particularly adept at manipulating the nitrogen cycle

In this research, Cathryn focused on some common Australian weeds, including wild radish, brome grass, wild oats and annual ryegrass.

No prizes for guessing which of these weed species was the champion of inhibiting the soil bacteria. You guessed it, wild radish once again shows us why this plant is so competitive with the crop. Having said that, all of these weed species did inhibit the nitrification process, but the wheat variety Janz did not.

For more on this research proving that weeds are truly motivated by their own self-interest, read on below.

How do you take your Nitrogen?

Most plants love their Nitrogen in the Nitrate (NO3–) form. Most soil nitrogen, whether it be from fertiliser or decaying organic matter starts its life in the ammonium (NH4+) form.

It’s the job of bacteria in the soil to break down ammonium into nitrate. Plants can take up ammonium a little bit, but it’s tightly bound to the soil so the plant roots must reach it and absorb it from the soil particles. For this reason, most plants prefer their Nitrogen in the form of nitrate because this is floating around in the soil water making it easy to access, and easy to take up through the roots. At this stage, and we don’t know for sure, but it seems that our common crop plants in Australia prefer nitrate, and some of our weeds may be better than our crop plants at taking up ammonium. This will be the focus of future research.

There are a couple of stages in the process of converting ammonium to nitrate, and this research refers to the first step in the process, so to keep it simple this is all we will discuss.  If you need a re-cap on the soil nitrification process check out the below video.

There are a number of soil bugs that are involved in the nitrification process.  This study focused on the bacteria Nitrosomonas europaea. They are the lab rat of soil nitrification bugs that other similar studies have focused on.

How the weeds manipulate the soil

In short, the weeds release chemicals from their roots known as root exudates that inhibit the growth of these bacteria-retaining nitrogen in the ammonium (NH4+) form, stopping the formation of nitrate (NO3–). At this stage, we don’t know what these chemicals are but we know they exist as a result of this great research by Cathryn O’Sullivan and others from CSIRO. 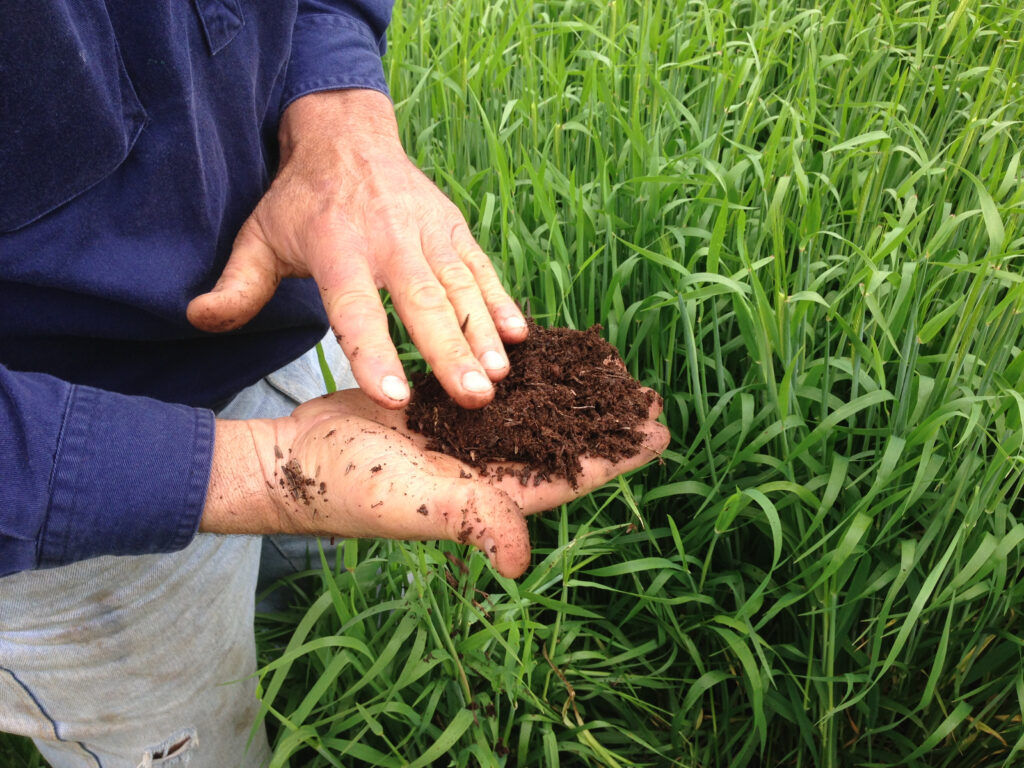 The first part of this research involved growing the weeds hydroponically, then extracting the root exudates from the hydroponic solution. The researchers then applied this root exudate to a pure sample of the ammonia oxidising bacteria, Nitrosomonas europaea, and measured nitrate production. The data below from this study shows that all of the weeds reduced the nitrification rate by the bacteria, with wild radish having the greatest effect. 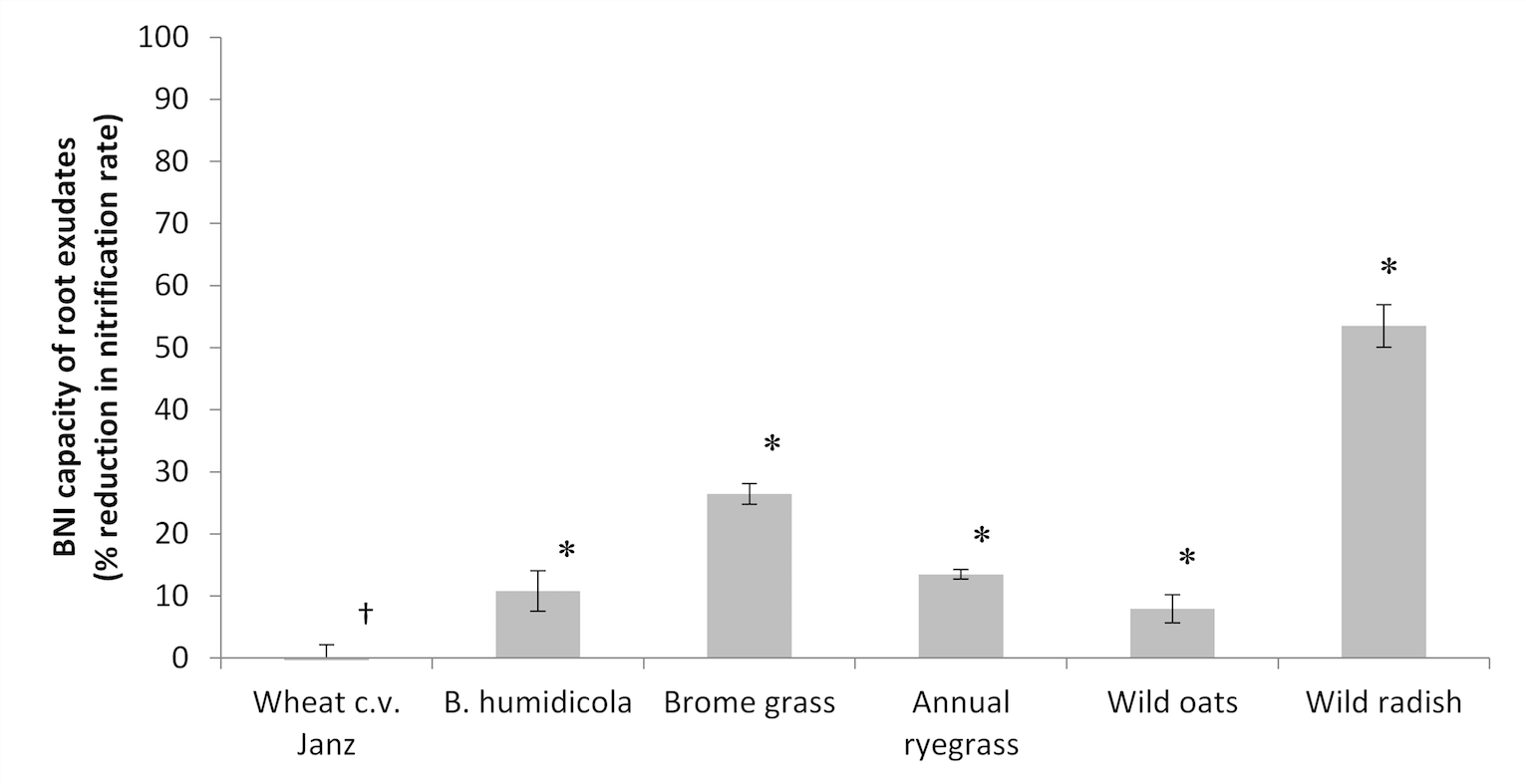 This data is clear evidence that the weeds release exudates that inhibit the bacteria’s ability to carry out the nitrification process.

The researchers then took this study a step further and analysed the effect in soil. They grew the weeds in pots and then pulled out the weeds and shook the soil from their roots, giving them a sample of soil from the weed’s rhizosphere and bulk soil. The data below shows that the effect was even greater in the soil than in the hydroponic test. Wild radish completely inhibited nitrification, with all of the other species having an effect. Interestingly, the wheat variety Janz, had very little inhibitory effect on nitrification which is further evidence that our crop plants prefer their nitrogen as nitrate. 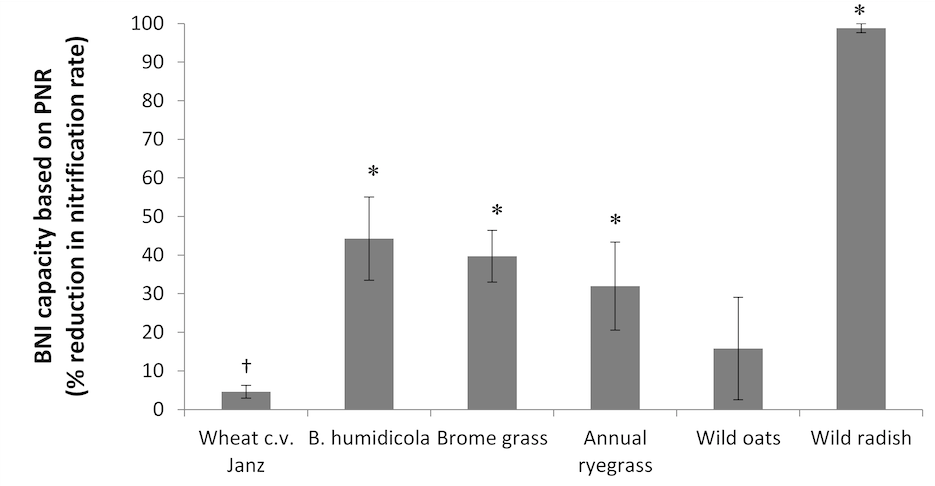 Why would the weeds do such a thing?

It’s possible that some weeds may be able to take up nitrogen in the ammonium form. If they can modify the soil bacteria so that most soil nitrogen stays as ammonium, the weeds will have an advantage over the crop that prefers nitrate.

We don’t know for sure that the weeds in this study have the ability to take up ammonium, but there are other examples where this happens. Native wheatgrass in the USA has the ability to hold nitrogen in the ammonium form in exactly the same way the weeds in this study have. Wheatgrass can utilise the nitrogen in the ammonium form, but the invasive weed, cheatgrass, prefers nitrate. This has allowed the native wheatgrass to suppress invasion from cheatgrass.

Future research will focus on how our Australian weeds can utilise the different forms of nitrogen in the soil. This could potentially lead to changes in fertiliser use that favour the crop over the weed. 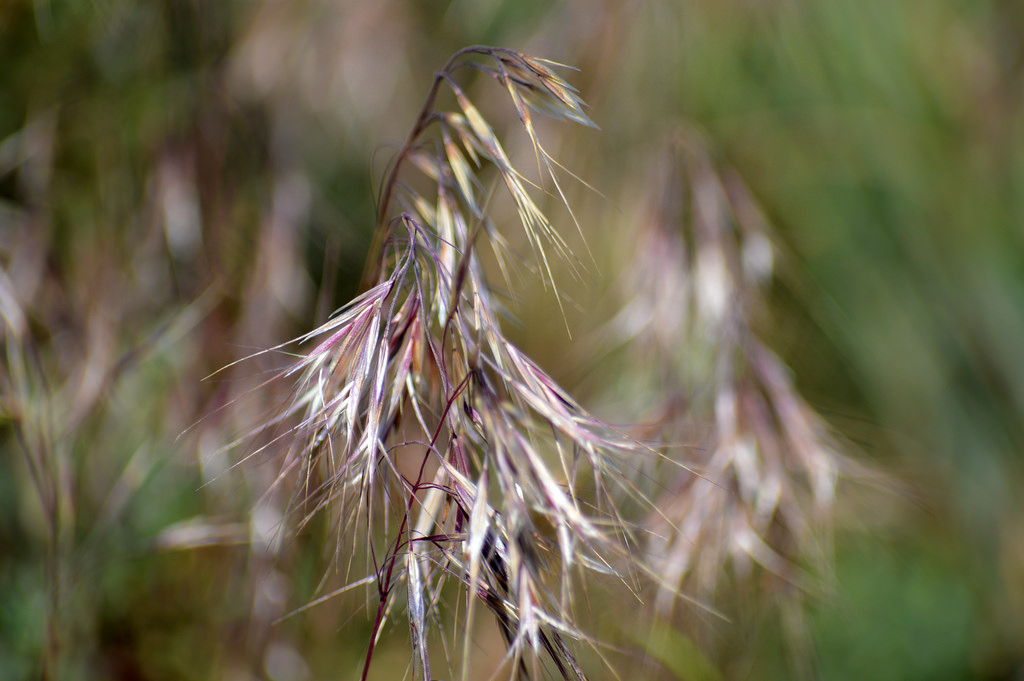 Close-up of the invasive weed cheatgrass, in the US

Weeds are called weeds for a reason. They are the masters of invasion and they use sneaky tricks to give them an advantage over our crops.  This is very interesting research that could one day give us another tool in our arsenal against our selfish weeds. 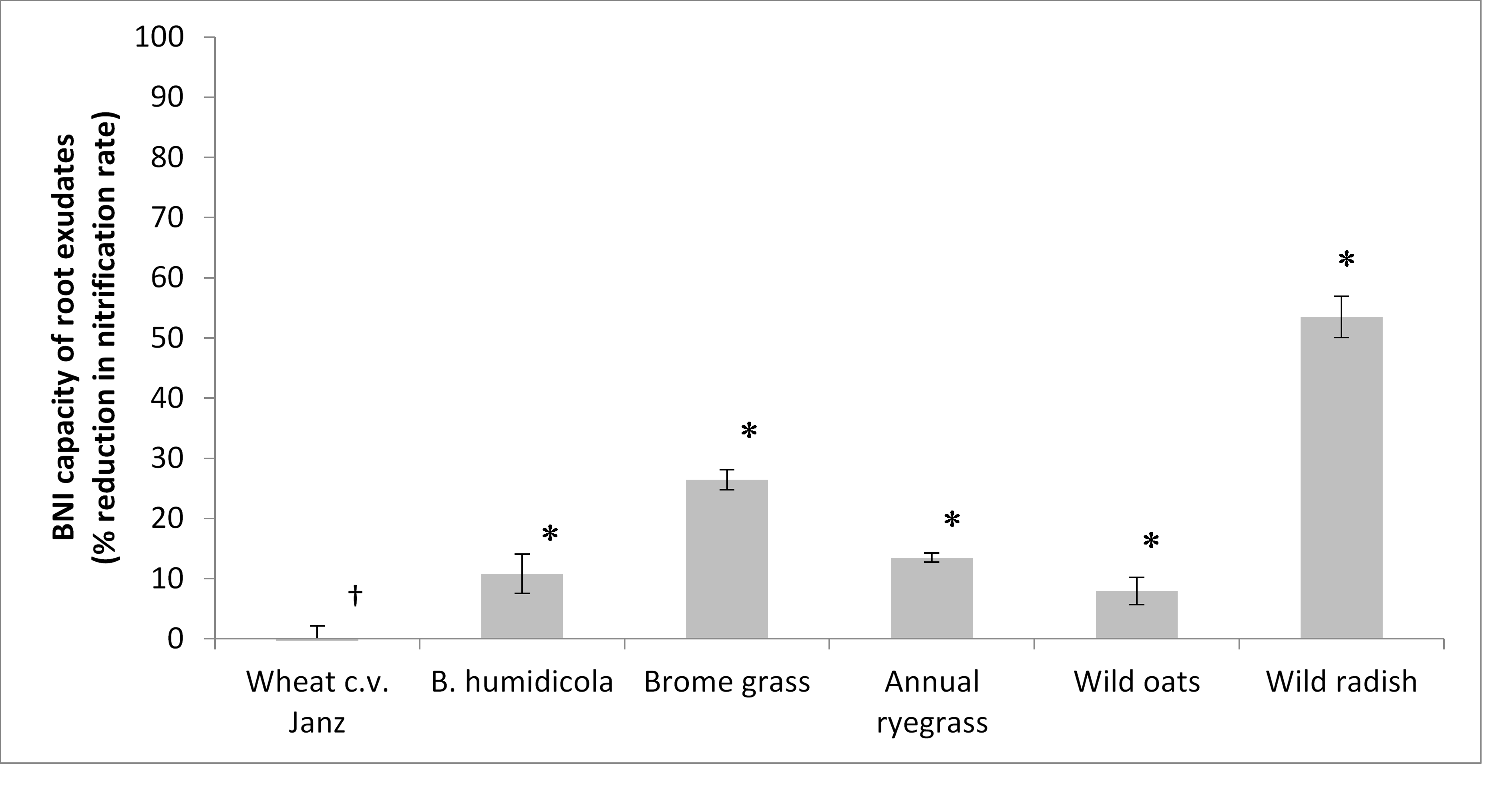