HomeArticlesThe Logies of Australian weeds, “Weed of the Year”

The Logies of Australian weeds, “Weed of the Year”

On the red carpet of the Australian weeds Logie awards for Weed of the Year, Annual Ryegrass was smugly strutting around in a slinky green number, confident that she would take out her 30th consecutive victory. All of the other weeds were spiteful and annoyed that their managers had forced them to turn up to yet another event where Ryegrass gets the gong, and they have to sit through another agonising acceptance speech where she brags about her latest herbicide resistance achievement, thanking the farmers for continuing to spray her with expensive herbicides, while making no mention of the other weeds.

“Just because she’s an obligate outcrosser with extreme genetic diversity doesn’t mean she’s the weediest weed”, Feathertop Rhodes Grass was heard to mutter as the crowd took their seats. “She couldn’t cut it in Queensland!”

MC for the event was past winner, and long-time destroyer of grain crops, Wild Radish.

“Ladies and gentlemen, I’m excited to announce that we have a new judging criteria for this year’s Weed of the Year award”, a murmur spread through the crowd.

Annual ryegrass had a face like a cat’s behind! “I don’t care”, she said. “I’m sure I’ve still got this in the bag. And who cares anyway, this is a stupid competition, everyone knows I’m the queen of the weeds. Farmers spend more money on herbicides for me alone than all the other weeds put together, and nobody has evolved resistance to more herbicides than me.”

Wild Radish opened the envelope. “And the nominees are…” 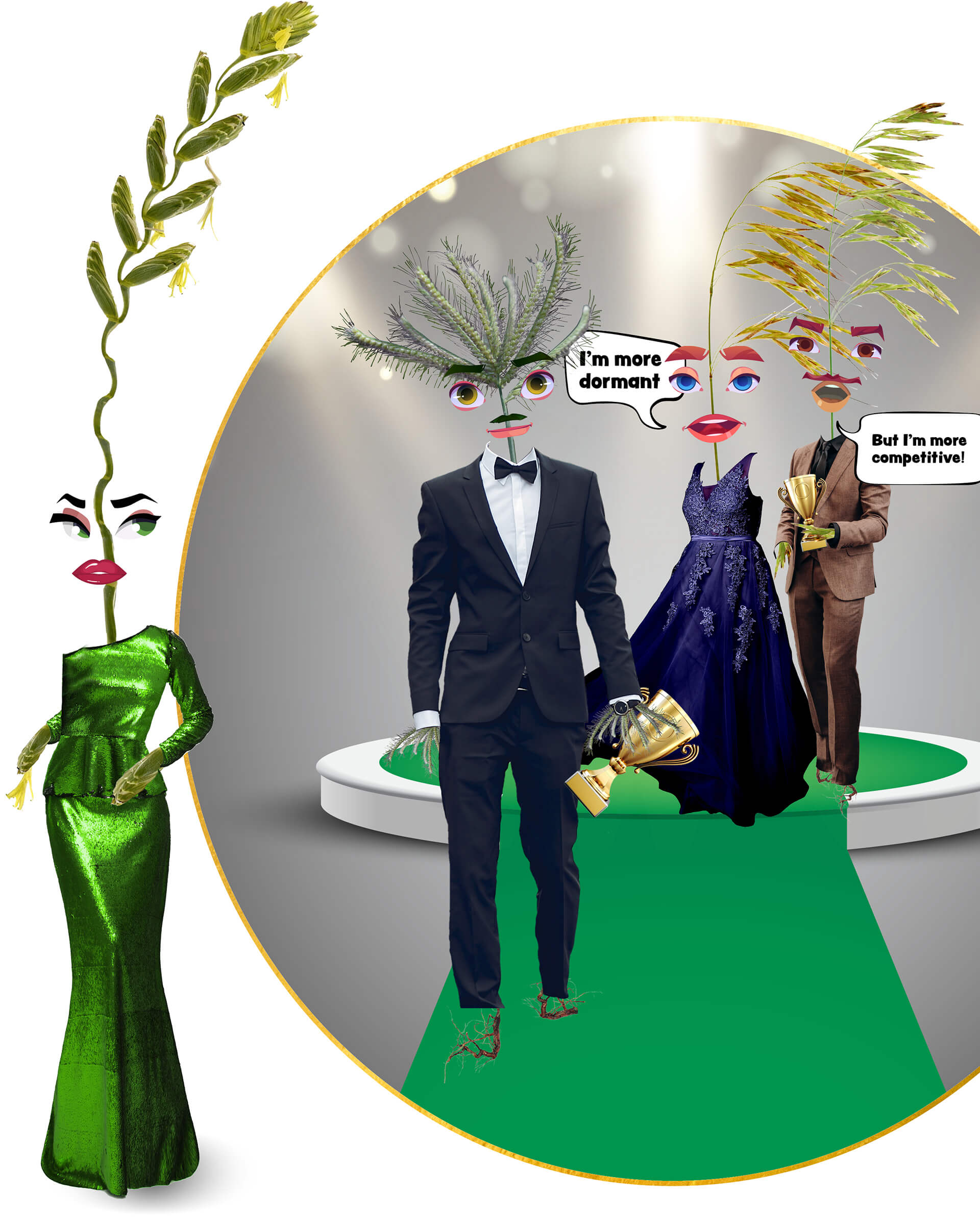 And the nominees are

“Annual Ryegrass”. A polite round of applause ensues.

“And rounding out the top five nominees, our first ever nominee from northern Australia, Chloris virgata, aka Feathertop Rhodes”, a huge roar of applause followed by the Queenslanders chanting “Beers, beers, beers”.

The other 15 weeds in the competition stared into their beers and declared to do better next year.

“The new judging criteria”, Wild Radish continued, “Involves the nominees being scored out of 10 over 10 different criteria. The criteria are”.

Annual Ryegrass flew into a rage, “So you’re telling me that because there’s a lot of herbicides registered for my control, and that my abundance has decreased because of these new herbicides, I’ve been marked down!”. She stormed out of the room to jeering from the Vetch species in the back row. “Get some paraquat into ya!”, yelled the Hairy Vetch to raucous laughter.

And the winner is

“Well, this is a turn-up”, announced Wild radish, “for the first time we have joint winners of the weediest weed of 2020”.

“The winners are… Brome Grass and Feathertop Rhodes Grass!”

“Beers, beers, beers” chanted the Queenslanders, proud to finally have a winner in Feathertop Rhodes.

Bromus rigidus and Bromus diandrus both got up to accept the award and immediately broke into an argument about who is the weediest brome of all. “I’m more dormant”. “But I’m more competitive!”.

“And taking out the wooden spoon, again, with just 15 out of a possible 100 points, the Vetch species.”

The evening descended into a debaucherous affair, with all the weeds slurping on UAN like it was going out of fashion, with some weeds, who knew they had the resistance edge, daring other weeds to take a shot of glyphosate. More than one weed had to be sprayed with the hose within the rainfast period, but we’re not mentioning any names! 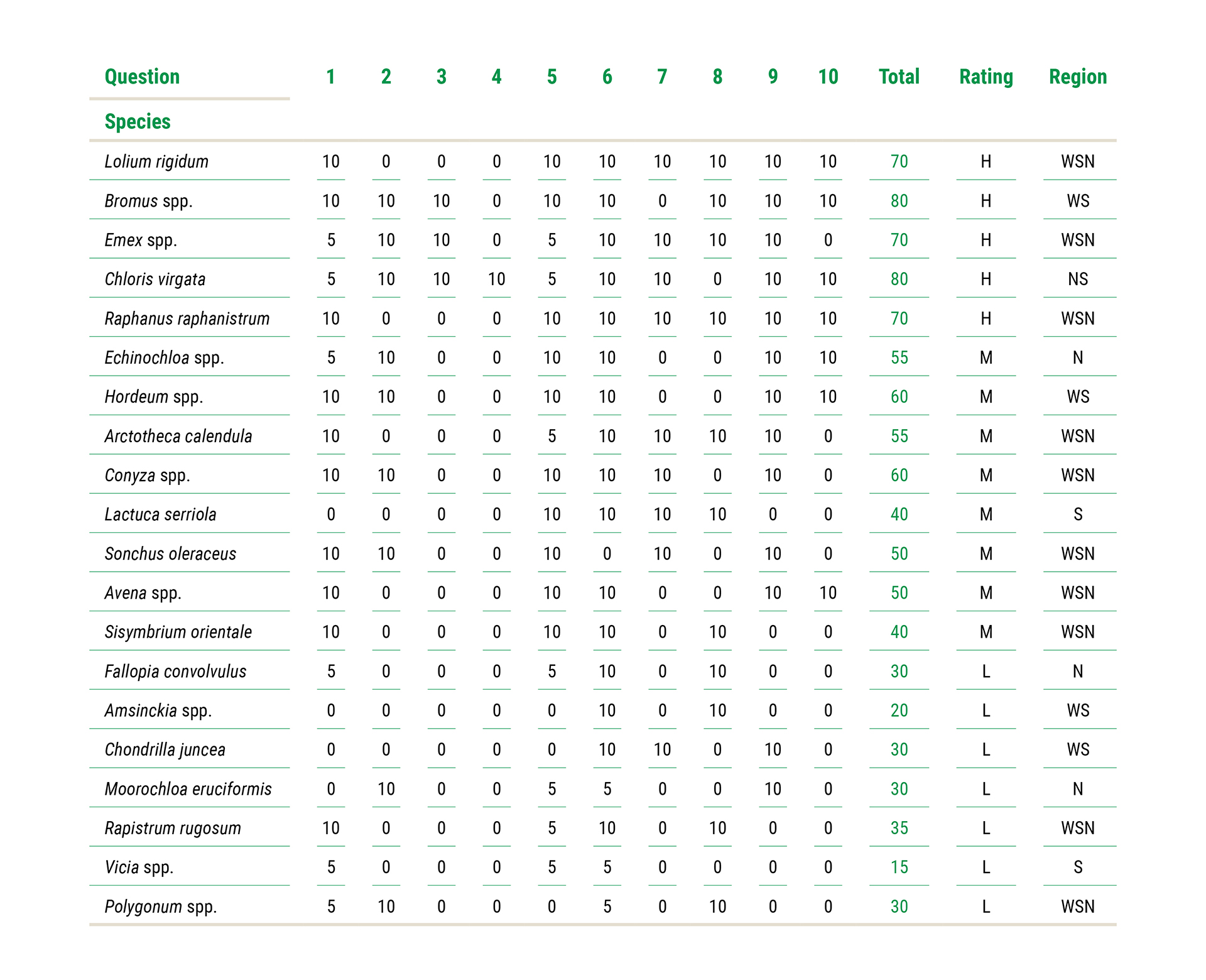 If you’re after a serious account of the Australian Weed Assessment calculator, you can find the paper below.