Driving through the northern wheatbelt of WA in the late 1990’s was a sea of flowers. Wild radish flowers. Hedges of flowers along fence lines and in patches throughout the crops.  We used to joke that the floral emblem of Geraldton was a wild radish flower.

At the time we believed that this weed may be the death of continuous cropping in the region. As you drove further south, the wild radish flowers dwindled and were largely non-existent in the south of the state.

If you then took this drive in 2015 you would still see the hedges of wild radish on the fence lines, but there were a lot fewer flowers in the northern crops despite an increase in cropping intensity.  Some new herbicides and a determined effort to smash the seed bank has paid off. Now, however, the wild radish flowers stretch much further south, and wild radish is now a weed of the entire state.

The most recent AHRI random resistance survey by researcher Mechelle Owen reflects exactly these observations. The survey visited 500 fields in 2015 and found only 65 wild radish populations in crop compared to 96 in the previous survey in 2010. There were fewer populations of wild radish found in the crop in the north, and more populations found throughout the rest of the state.

As you may expect, herbicide resistance levels in wild radish have generally increased a little between the 2010 and 2015 surveys. The good news is that no resistance was found to either glyphosate or Velocity® (pyrasulfotole + Bromoxynil).

For more detail on the state of wild radish resistance in Western Australia, continue reading.

Mechelle Owen and her team of weed surveyors hit the road in spring in 2015 to visit 500 fields in Western Australia to sample weed seeds from survivors in the crop. They needed to sample after the weed seeds were mature, but before the harvesters started to roll in. They sampled whatever weeds they happened to find and then would spend the next three years testing for resistance by growing weeds in thousands of pots during the winter months and spraying them in the spray cabinet. Wild radish in the growth area at UWA as part of Mechelle Owen’s survey work. 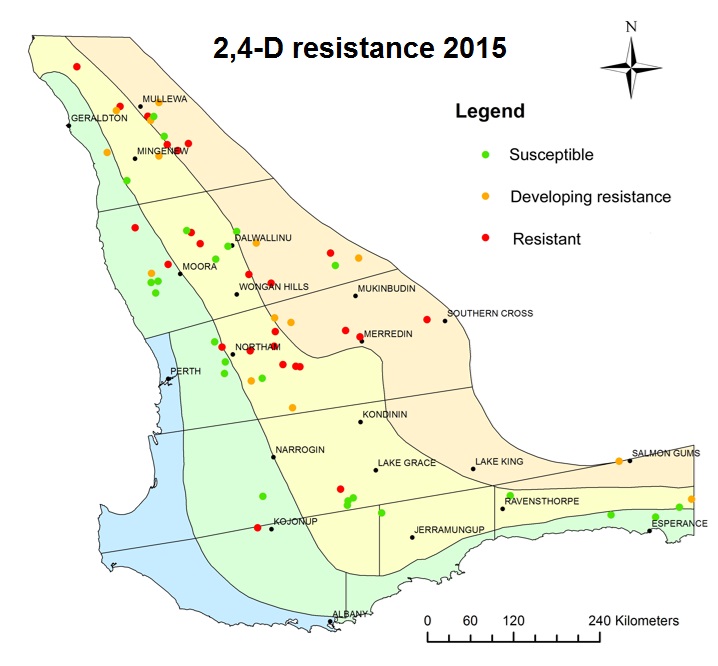 Figure 1: A map depicting the location of wild radish populations found during the 2015 random survey. The resistance status of wild radish to the herbicide 2,4-D is indicated by the coloured dots where green = susceptible, amber = developing resistance (1 to 19% survival) and red = resistant (20% survival or greater).

Comparing the 2,4-D resistance map above with the 2010 map below shows that the biggest reduction in the number of radish populations was in the north of the state. It’s a little difficult to compare directly between years in this survey as there were less wild radish populations found than in the previous survey, with a big reduction in the number of populations in the north of the state. The graph below shows the percentage of populations with resistance (more than 1% survival) for a range of herbicides over a number of random surveys. 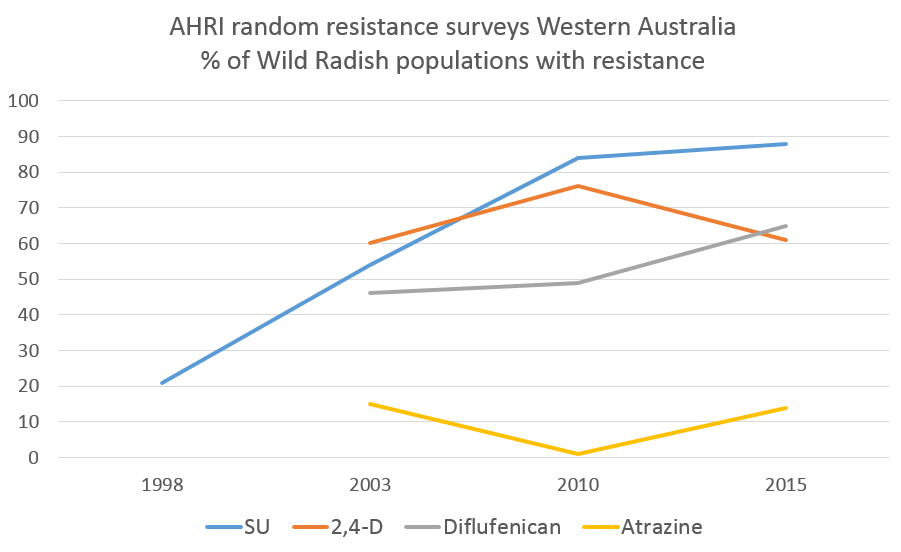 Diflufenican (e.g. Brodal®) resistance levels have steadily increased over the years. We’re still unsure of the mechanism of this resistance and this is a topic of ongoing research.

It appears that 2,4-D resistance has decreased from the 2010 survey to the 2015 survey however this is unlikely to be the case. This is probably due to fewer populations being found in the north (see the maps above).  There is still plenty of 2,4-D resistance in the north but the populations were controlled by alternative herbicides and diligent seed bank management.

Resistance to the SU herbicide chlorsulfuron has gradually increased over the years to the point where there are very few susceptible populations in the state. The other way to look at this result is that chlorsulfuron (e.g. Glean) will give 80% control or better for 26% of the populations, so it may be worth testing for resistance in some circumstances to see if this very low-cost herbicide is still an option.

We cannot explain why we found low levels of Atrazine resistance in the 2010 survey compared to the 2003 and 2015 surveys. Atrazine resistance has been the catalyst for many of the northern WA grain growers to switch from TT to glyphosate-tolerant canola systems in recent years.

It’s great news that we found fewer wild radish populations in the 2015 survey compared to the 2010 survey. We’re on the right track in terms of staying on top of wild radish numbers.  Most growers wouldn’t have believed that this would be possible if we asked them 15 years ago. However, we don’t want to be complacent as new wild radish herbicides have been a big help in this quest. We must stay vigilant and committed to keeping the wild radish seed bank low.