We’re blowing up our most valuable herbicides on the least productive part of the farm.

AHRI researchers, Dr Yaseen Khalil and Dr Mike Ashworth and others have confirmed the world’s most recent addition to the growing list of glyphosate resistant weeds: capeweed.

It has 11-fold resistance and it’s also resistant to two other herbicides.

It must cross-pollinate, so it spreads its genes quickly (sound familiar?).

It was found in a non-cropped drainage area that was regularly sprayed with glyphosate, then it spread into the nearby paddock.

When you think about it, un-cropped areas that are sprayed with the same herbicide every year are heaven for weeds. The glyphosate kills all of the competition and there is no crop, so the surviving weeds have an unlimited supply of moisture, sunlight and nutrients.

We’re not pointing the finger here – we know that this is common practice on many farms around the world, but we need to learn from these problems and work out how we can add some diversity and competition to these areas to reduce repeating the same thing happening with other weeds. 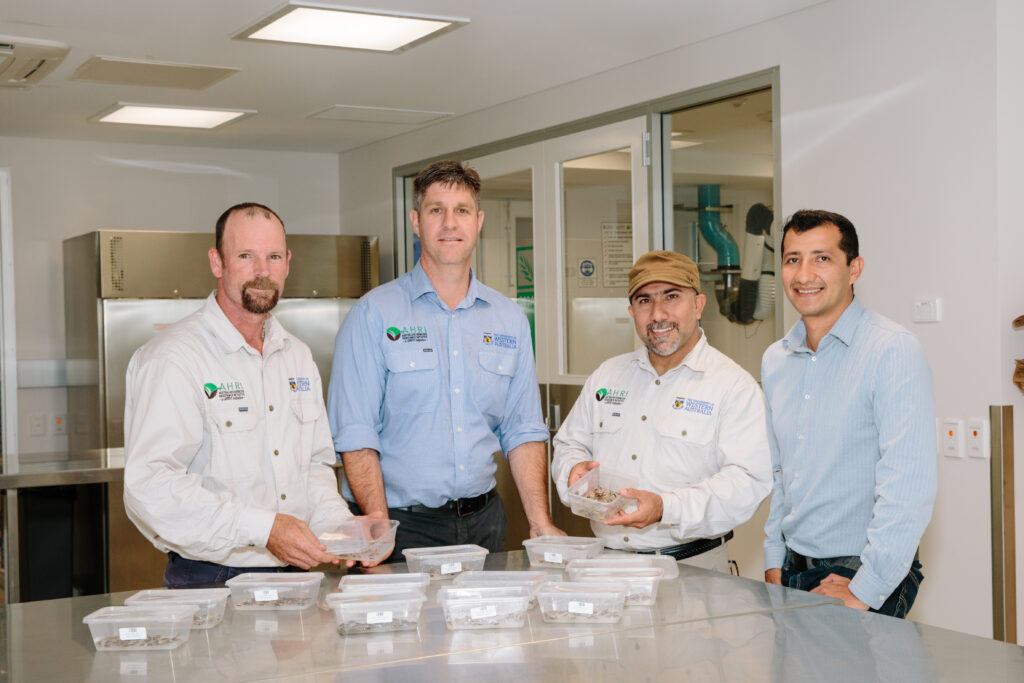 The capeweed (Artotheca calendula) in this study was collected by agronomist Brent Pritchard from a farm near Borden in Western Australia. They were found in an un-cropped drainage area that was routinely sprayed with glyphosate over many years. The surrounding field had a diverse rotation of wheat, TT canola, pasture and fallow over a 17-year period. Capeweed evolved resistance to glyphosate in the un-cropped area and then infested the surrounding field.

The first step was to collect some capeweed seed directly from the field. This was actually done by sampling some ant nests where the ants had gathered a lot of capeweed seed. This seed was tested with a range of glyphosate doses to determine the LD50 – the lethal dose to control 50% of the population. This revealed 3.8 fold resistance. Four to eight leaf plants were sprayed in all trials.

The field samples contained seeds of both resistant and susceptible plants which has the effect of diluting the level of resistance. The researchers then purified this sample by taking plants that had survived 2L/ha glyphosate 540, allowing them to set seed in isolation, then collecting their seed. The dose response trial of this purified population revealed 11.2 fold resistance when compared to six susceptible populations of capeweed.

The chart below shows the dose response curve of the purified resistant population compared to a known susceptible. 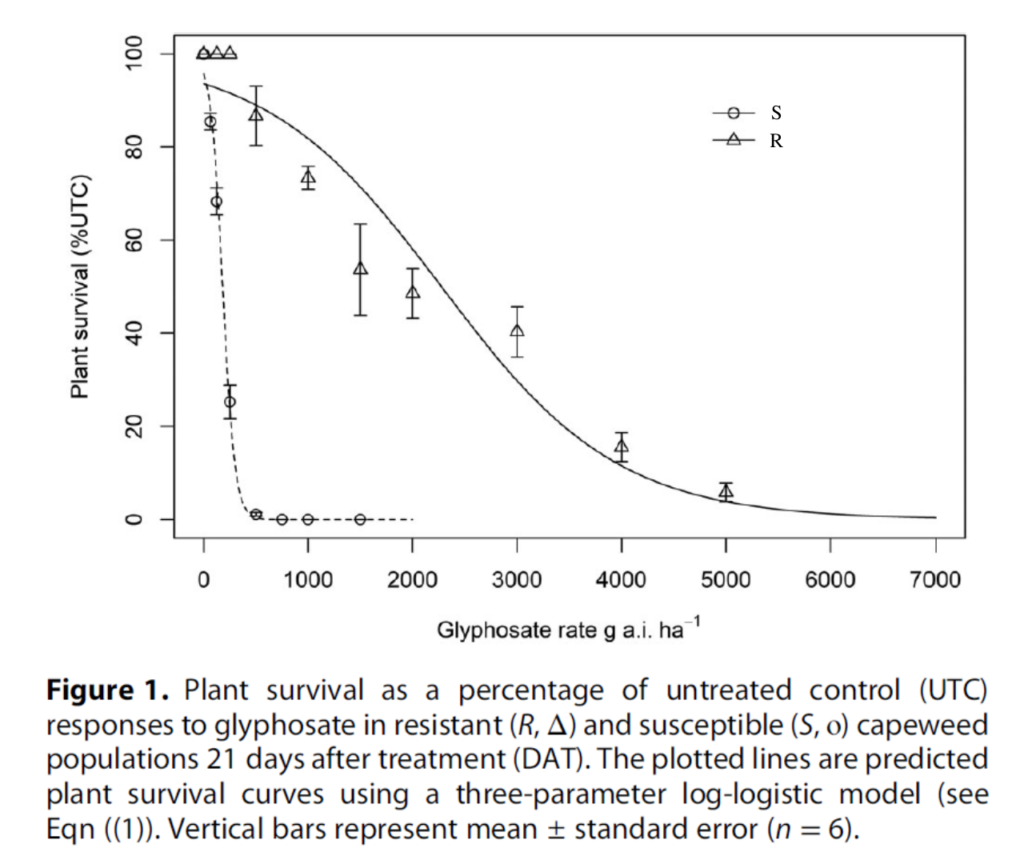 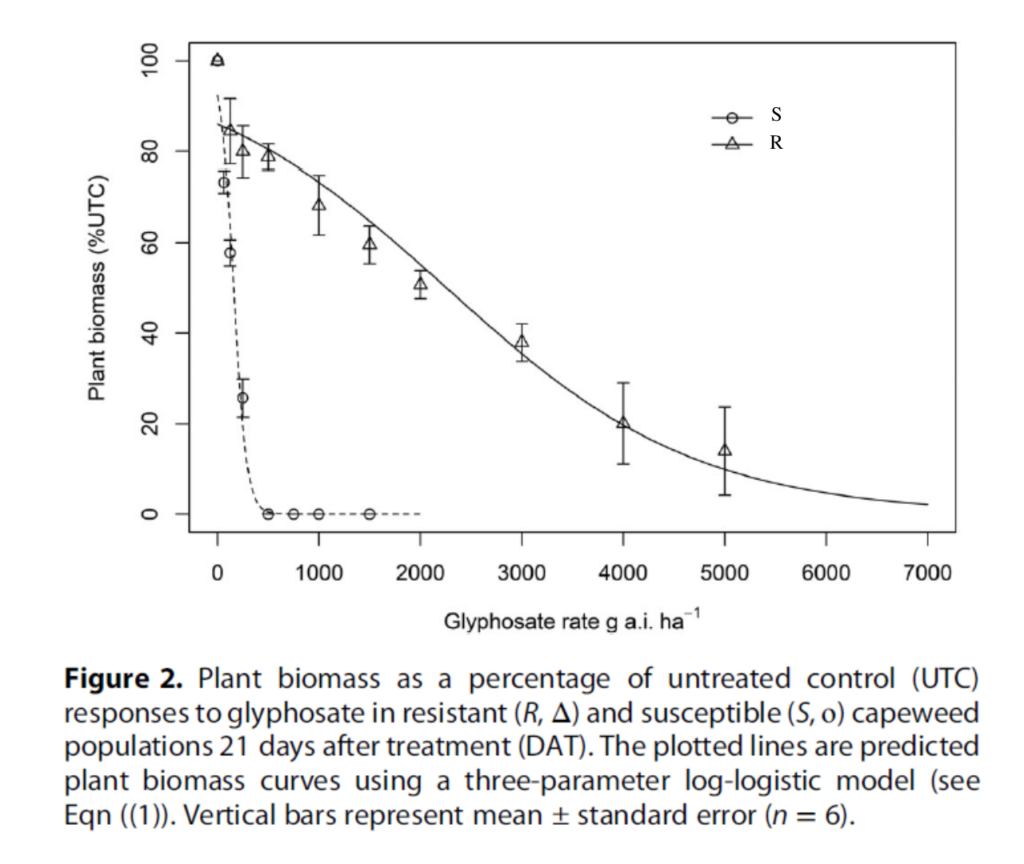 This capeweed also shows some signs of resistance to Metosulam (Eclipse®) and Diflufenican. It isn’t clear if this resistance evolved in the cropping field or the un-cropped area and it will be the subject of future research. The resistant capeweed was screened with a range of other herbicides including Clopyralid, MCPA, Bromoxynil, Diuron, Metribuzin, Simazine, Spray.Seed® and Velocity® with no resistance detected.

It should come as no surprise that an obligate outcrossing weed such as capeweed will evolve resistance to glyphosate after many years of selection with glyphosate in an un-cropped area. The challenge is to work out how to avoid the same problem in other areas with both capeweed and other weeds. A good start is to mix and rotate herbicides when used in non-cropped areas and perhaps to encourage competition from desirable species in these areas.