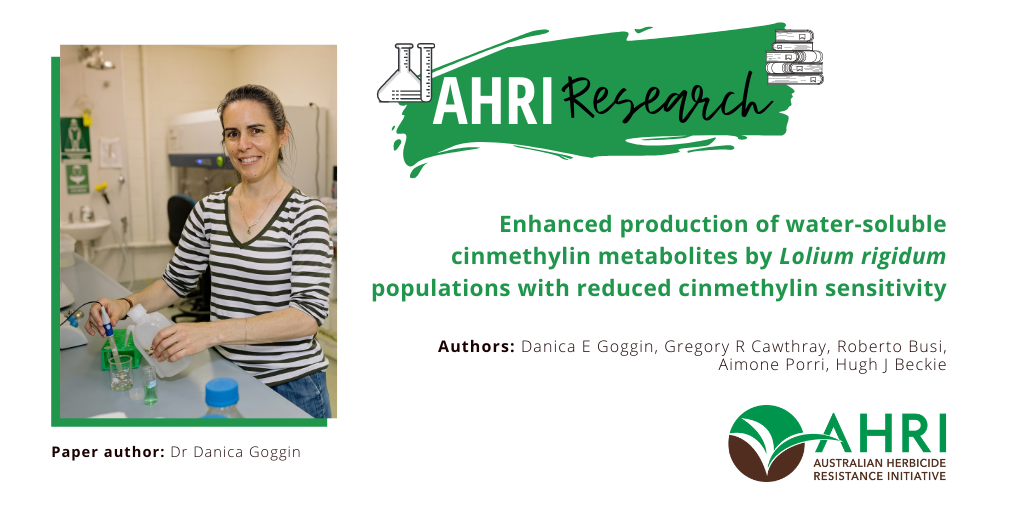 Cinmethylin, a pre-emergence herbicide inhibiting fatty acid thioesterase activity, has recently been introduced to Australian cereal cropping for the control of Lolium rigidum Gaud. (annual ryegrass). To date, there have been no confirmed cases of cinmethylin resistance identified in this species, but some populations exhibit reduced sensitivity to this herbicide. To explore the mechanism which contributes to reduced sensitivity of annual ryegrass to cinmethylin, the extent and nature of cinmethylin metabolism, using [14C]-labelled herbicide, were analysed in three reduced-sensitivity annual ryegrass populations, alongside a susceptible population and cinmethylin-tolerant wheat as controls.

All samples showed the same metabolite profile, with the extent of production of a specific water-soluble metabolite being correlated to the level of herbicide sensitivity. Application of the cytochrome P450 inhibitor phorate caused a decrease in water-soluble metabolite production as well as seedling growth in the presence of cinmethylin, indicating that reduced cinmethylin sensitivity in annual ryegrass could be wholly or partially due to oxidative modification of cinmethylin.

Because annual ryegrass has the potential to metabolise cinmethylin in the same way as wheat, careful stewardship is required to ensure the longevity of this herbicide.