We are creatures of habit. For some reason I always buy Colgate toothpaste, the other brands don’t even get a look in. Mrs Marsh was just so trustworthy and I daren’t use another brand for fear of my teeth falling out.

Similarly, when it comes to knockdown herbicides, most growers automatically reach for the glyphosate. Such a reliable, brilliant herbicide that rarely lets them down.

But this year may be the first year that glyphosate fails for many Australian grain growers as resistance to this herbicide is going through the roof in some areas.

The short term answer is to use more paraquat based products and don’t automatically reach for the glyphosate. However, this is not a long term solution as paraquat resistance will result. There can be only one true long term solution and that is to farm with a very low weed seed bank.

The Australian Glyphosate Sustainability Working Group led by Dr Chris Preston have documented a huge increase in the discovery of glyphosate resistance in Australia in recent years. There are two types of resistance surveys, random or targeted. 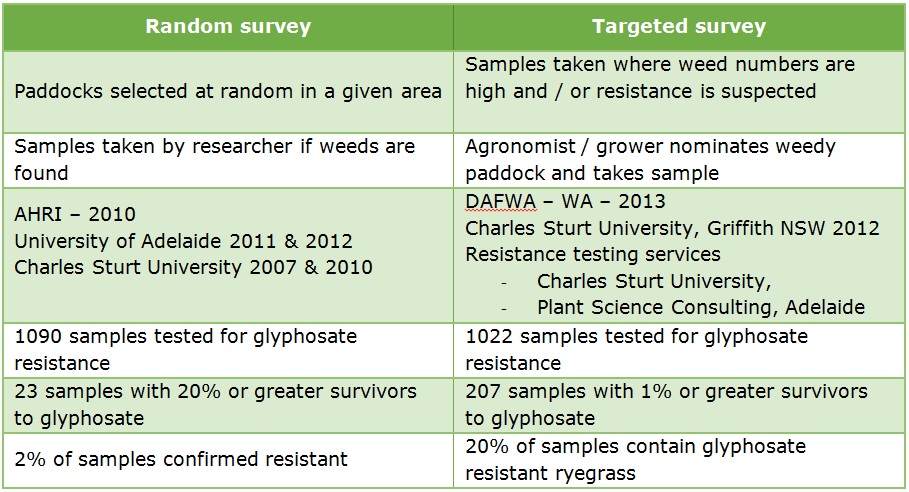 The random surveys visited randomly selected paddocks and sampled weeds from a range of species which were later tested. The targeted surveys sampled weeds from weedy paddocks that were nominated by growers / agronomists. They were not targeted specifically because glyphosate resistance was suspected, they were targeted because weed numbers were high and resistance to a range of herbicides was suspected.

Table 1. Summary of random surveys testing for glyphosate resistance. Only populations with greater than 20% survival to glyphosate are reported here. 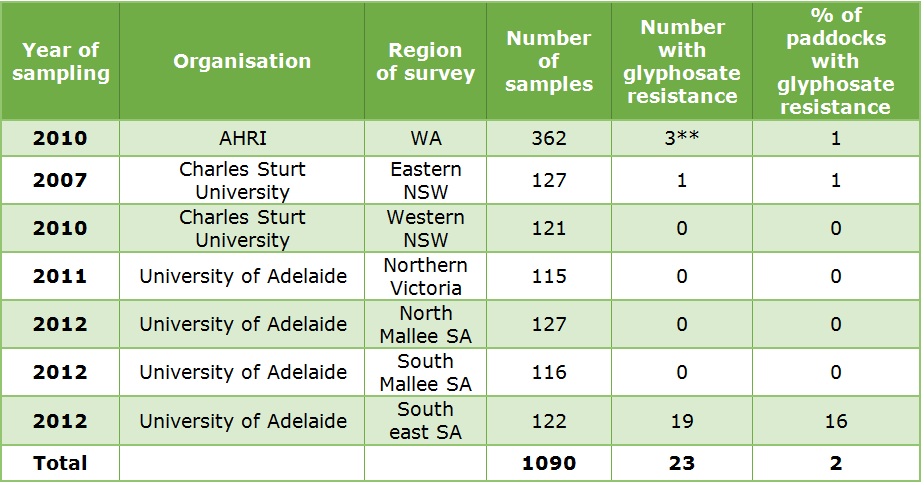 ** Mechelle Owen found 25 populations with survivors to glyphosate in the AHRI survey, however only 3 populations had greater than 20% survival.

207 paddocks (20%) with glyphosate resistant ryegrass. This should serve as a big wake up call. 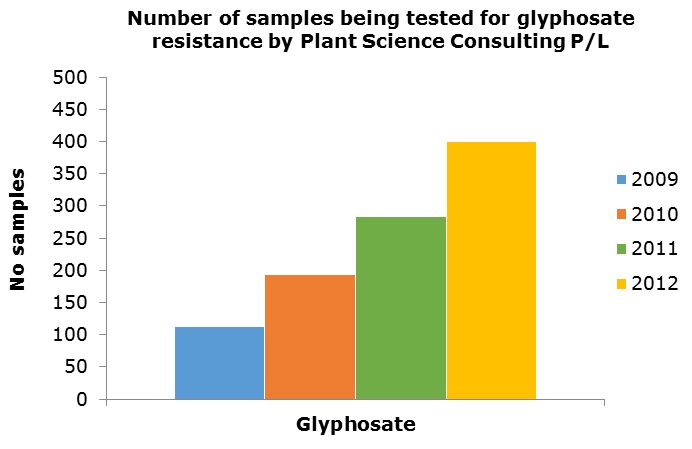 For example, in Western Australia this year there was a perfect opportunity for a paraquat based knockdown. A long, dry summer with a distinct break at the end of April. Growers were faced with only small weeds. There is no need to use glyphosate in this situation.

The double knock of a full rate of glyphosate followed by a full rate of paraquat based product one to seven days later is the ideal herbicide option to take the pressure off glyphosate. However, it simply isn’t possible to achieve a double knock on every paddock every year. This practice should be used whenever it is practical and cost effective.

The only real, long term solution to glyphosate resistance in ryegrass (and all resistance problems for that matter) is to farm with a very low weed seed bank. Once growers declare war on weeds, and adopt a take no prisoners approach using a combination of chemical, cultural and mechanical weed control, they have a win. It is difficult, and takes considerable motivation, but it can be done.

Declare war on weeds (guerrilla warfare is best, confuse the enemy), and take no prisoners.

What to do if you suspect glyphosate resistance this year

Step 1. Test. Sample some plants from the field and send them to Peter Boutsalis of Plant Science Consulting in Adelaide for quick testing.

Step 2. If resistance is confirmed jump hard on the problem. Don’t let them set seed.