Does it work for glyphosate resistant ryegrass? Yes. But you have to do it right, plenty of paraquat at the right time.

Unfortunately, paraquat may be in short supply in some areas of Australia this year. Where this is the case we must prioritise where we use it and be prepared by having product on farm.

Knock knock
Who’s there?
Ryegrass
Ryegrass who?
Glyphosate resistant ryegrass coming to a paddock near you if you don’t do something about it.

The double knock is a great place to start.

Former AHRI researcher, Paul Neve (now based at Rothamsted Research) and Art Diggle from the Department of Agriculture and Food of WA built a computer model in 2003 to determine the probability of glyphosate resistance evolving for a range of knockdown strategies. Their model appears to be quite accurate. The model predicted that after 12 to 15 years of continuous glyphosate the probability of resistance began to increase. Twelve years on and glyphosate resistant ryegrass is starting to escalate in Australia, just as the model said it would if we over-relied on glyphosate. The model ran a Wheat: Lupin: Wheat: Canola rotation sown with no-till seeding equipment. 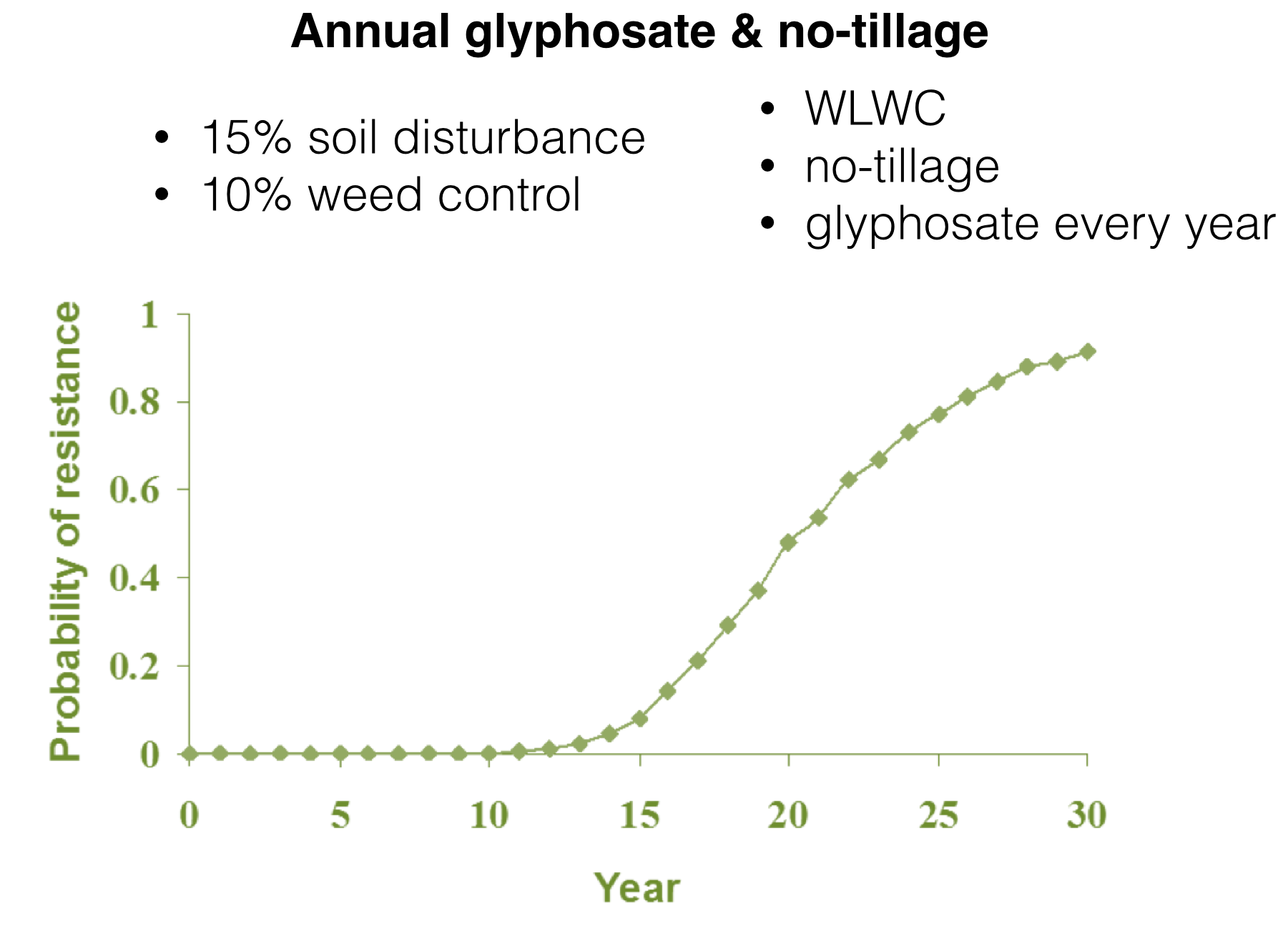 Paul and Art also modelled some alternative strategies. Firstly, rotating between glyphosate and paraquat. This certainly reduced the probability of glyphosate resistance evolving. 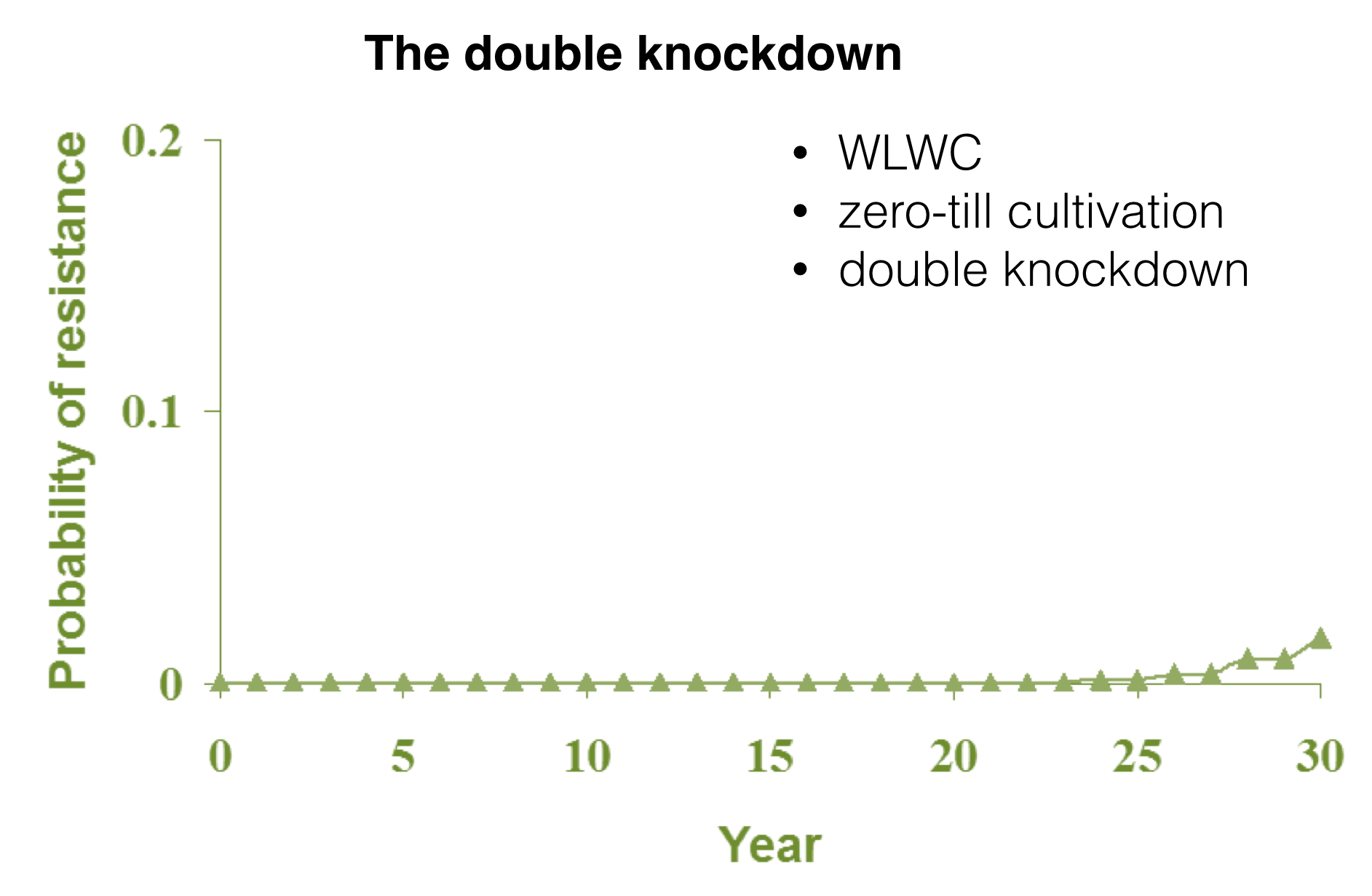 What is the ideal timing between knocks? Back in the day, the recommendation was to apply the second knock 5 to 10 days after the first. However, growers found that in some situations they were ready to seed before 5 days was up, hence the question, what is the shortest interval between knocks without compromising weed control?

Following is a quick review of a number of research trials.

The trial below was conducted by Peter Newman in 2003 while working at DAFWA with GRDC funding. Ryegrass as the site was 3 to 4 leaf (623/m2) and capeweed (116/m2) was 5 to 15cm diameter. Gly/SS refers to glyphosate followed by Spray.Seed® and so on at various intervals between knocks from 1 hour to 4 days. This trial shows that all knockdown intervals worked for ryegrass. Excellent growing conditions persisted and the Spray.Seed® rate was more than adequate. Keep in mind that this ryegrass is not glyphosate resistant. The trial also shows that applying Spray.Seed® first in the sequence worked well, however, as you will see later, this is not the case for capeweed. 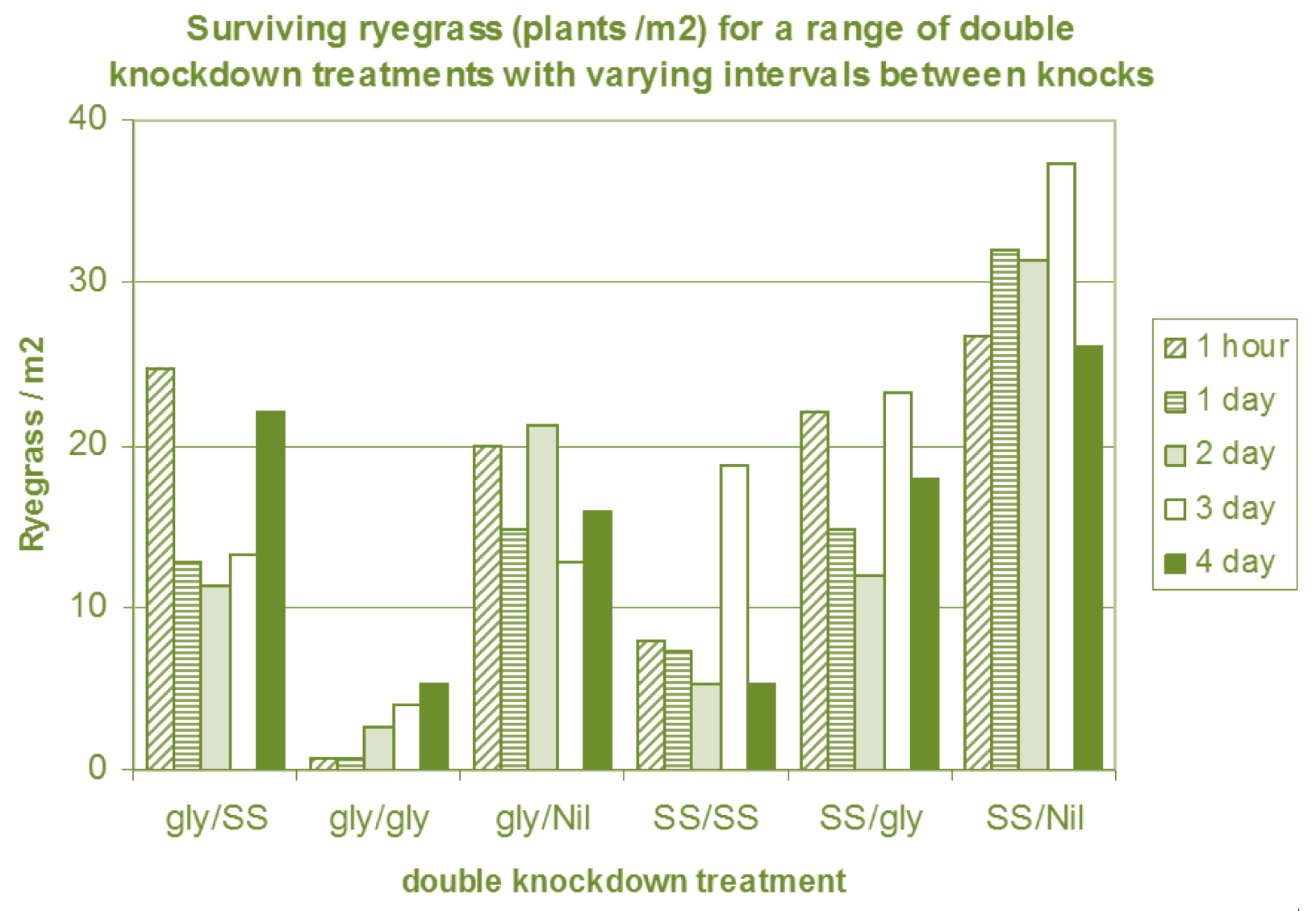 The trial below was also conducted by Peter Newman while working at DAFWA with GRDC funds in 2004. This trial looked at a range of single and double knockdowns for large wild radish (up to 60cm diameter). This trial shows that following glyphosate with Spray.Seed® within one day can antagonise glyphosate. It is likely that the Spray.Seed® shuts the plant down before glyphosate has had a chance to translocate. One day between knocks is OK, but two days is better. The trial also shows that Spray.Seed® first in the sequence is a bad idea, as is half rates of herbicide, and there are a number of ways to kill large wild radish with Spray.Seed® mixes. 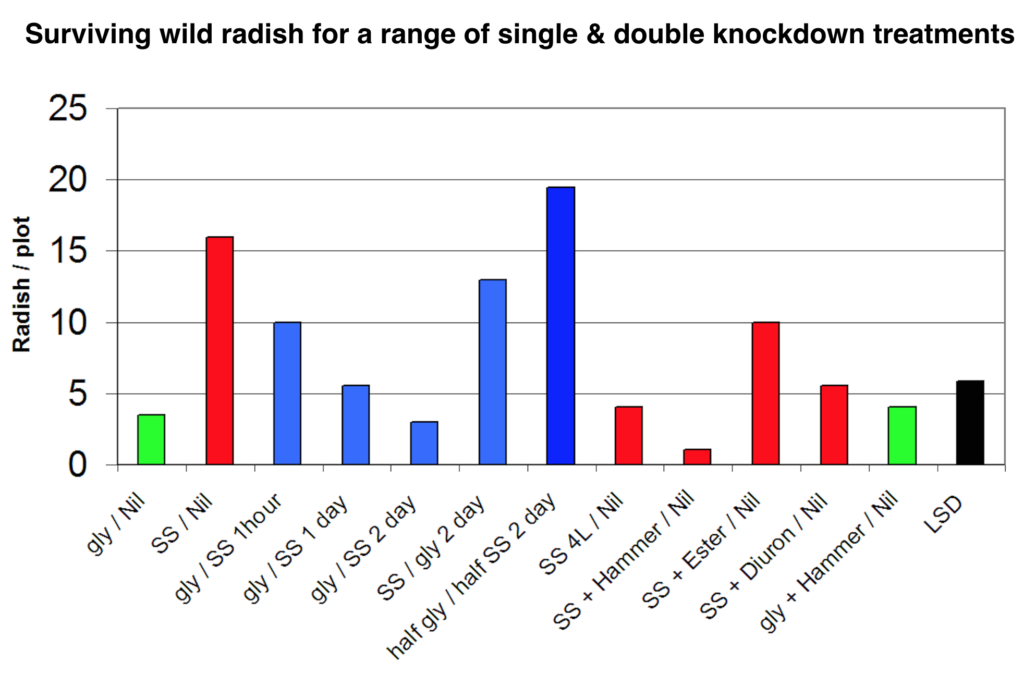 This trial was also conducted by Peter Newman while working at DAFWA with GRDC funds in 2004. The grass weeds in this trial were primarily large tillering barley grass. Once again, glyphosate followed by Spray.Seed® is the best sequence with one or two days between knocks. One hour between knocks was too close and Spray.Seed® benefited from cultivation after spraying.

Does it work on glyphosate resistant weeds?

All of the trials above were conducted on glyphosate susceptible weeds. So begs the question, will the double knock work on glyphosate resistant weeds? This is the whole idea after all. 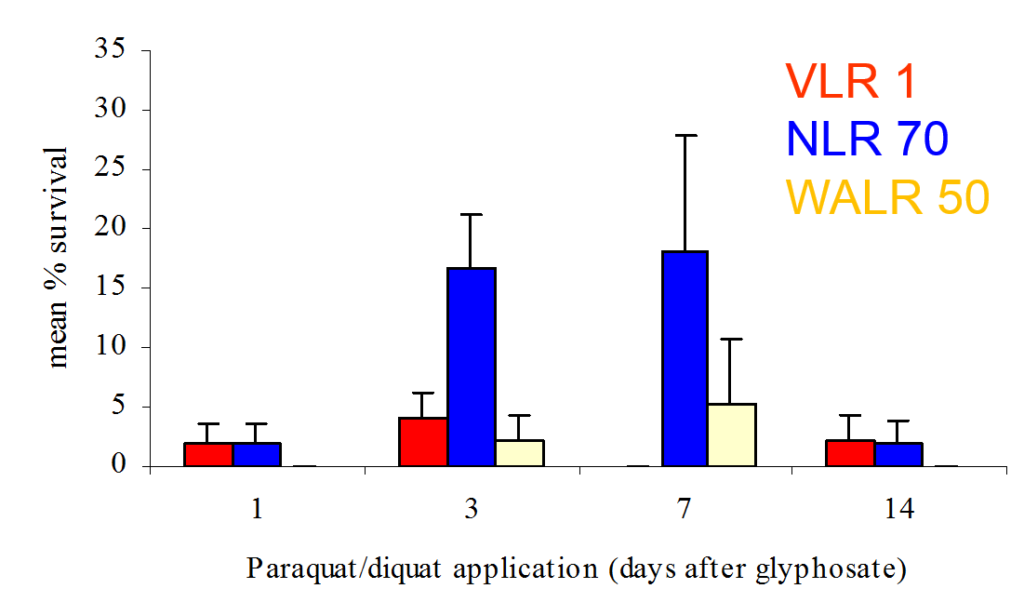 Andrew Storrie commented that the key is to ensure that the paraquat or Spray.Seed® rate is high enough. Don’t skimp on the second knock. 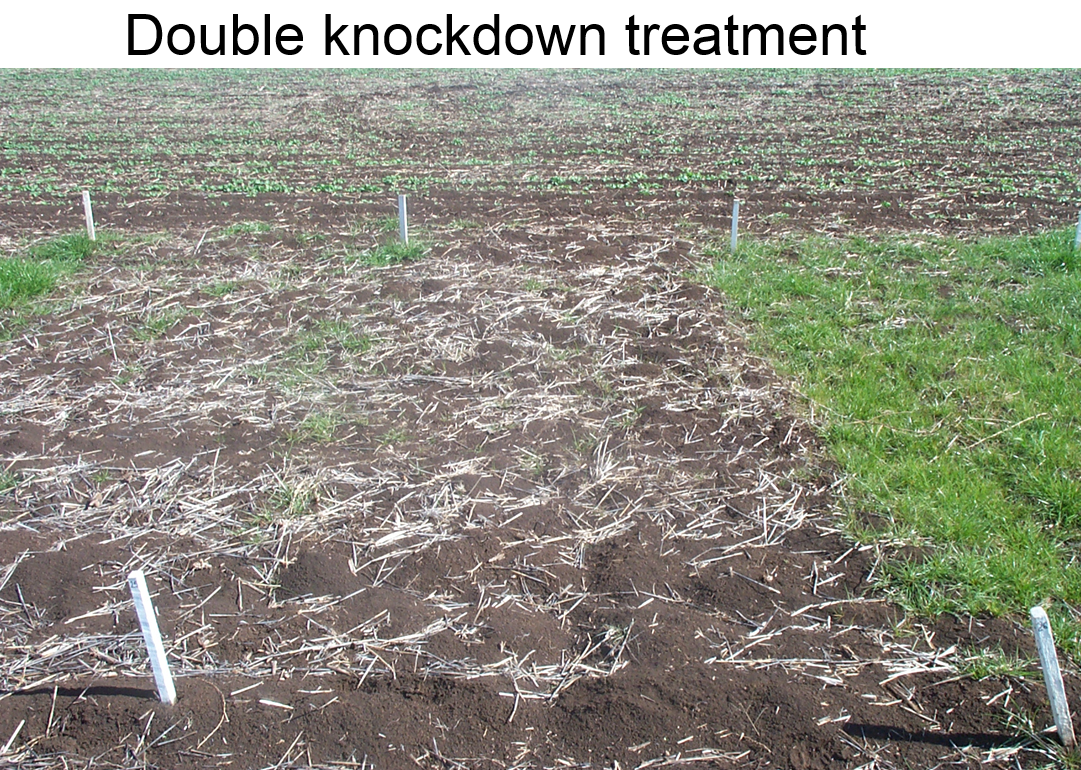 Glyphosate first is the best sequence for the double knock. In some trials, grass can be controlled well when paraquat or Spray.Seed® is applied first but it doesn’t work for broadleaf weeds. The data below is from the 2003 trial by Peter Newman already mentioned above. All of the capeweed died when glyphosate was applied first in the sequence but it did not when Spray.Seed® was applied first. Further evidence of this was seen in the wild radish trial above. 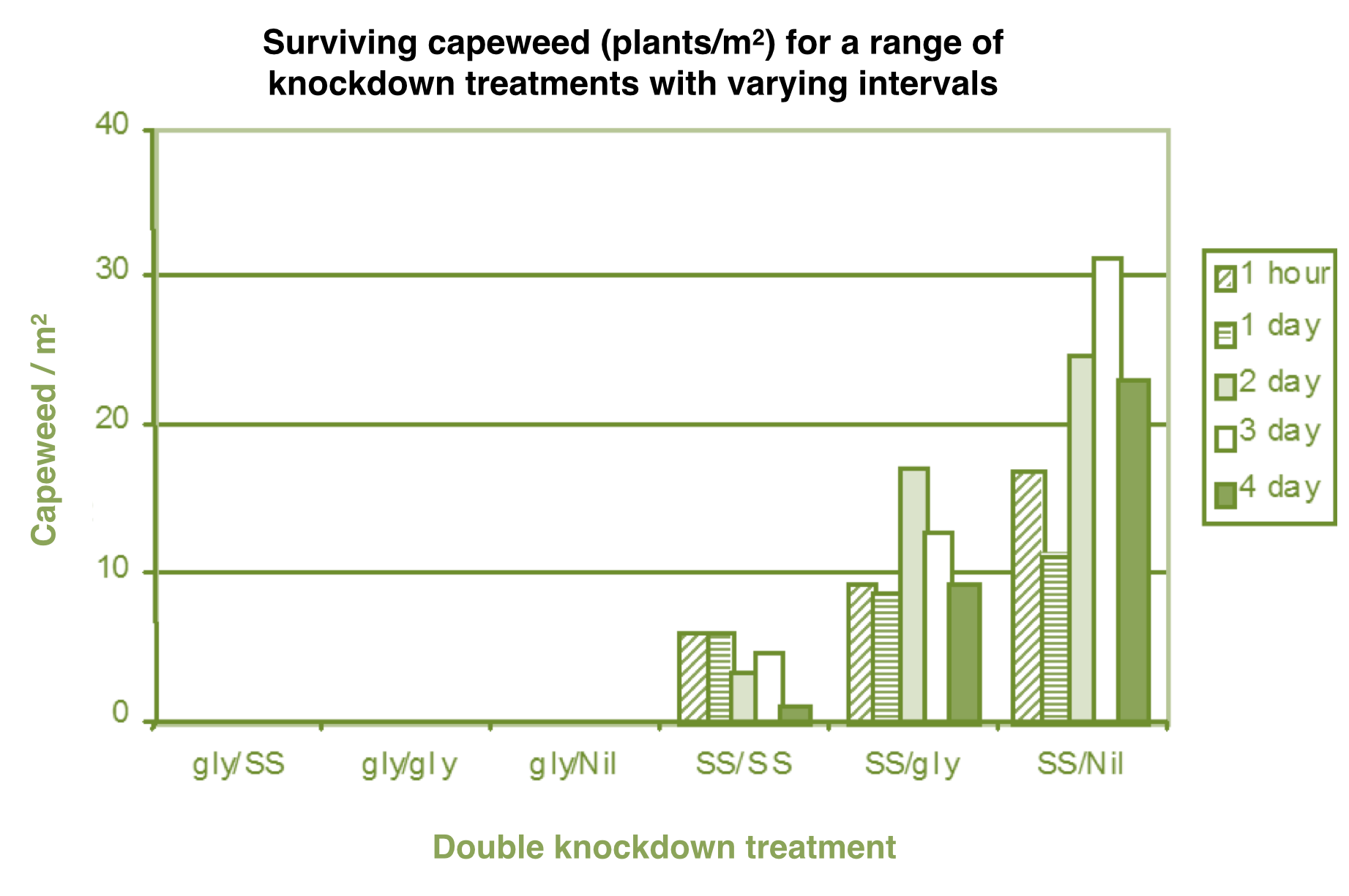 It is imperative that lethal rates of herbicide are used for both knocks. The whole idea of the double knock is to ensure that no resistant weeds survive. Cutting the rate of either of the knocks jeopardises this. In addition to this, many double knock trials have been conducted on glyphosate susceptible weeds. The starting point for paraquat as the second knock on annual ryegrass should be 1.5 L/ha and 2 L/ha for Spray.Seed® for 3 leaf plants increasing with plant size and time between knocks. For glyphosate resistant weeds, it is imperative that the paraquat or Spray.Seed® rate is adequate to completely control the weeds based on when they germinate.

In the ideal world, the double knock would be applied to every field every year. However, this is not always possible, particularly given the likelihood of paraquat shortages in some years. Below is a priority order list of fields that are best suited to the double knock:

At least one day between knocks, two or more is ideal.

Plenty of paraquat or Spray.Seed® with excellent application.

The double knock works on glyphosate resistant weeds, don’t skimp on the rates.