“But metribuzin doesn’t control ryegrass”, I hear you say! Well, as it turns out, metribuzin is about as effective on ryegrass as Atrazine, but perhaps it’s only applied at rates lower than the lethal dose in our Australian cropping systems.

This recent AHRI research by Chinese postdoc Hongju Ma and others documents the first case of metabolic resistance to metribuzin in ryegrass in Australia.  The ryegrass in this population was only about 3 fold resistant to Atrazine and Metribuzin.  The researchers used a P450 inhibitor, PBO, and radiolabelled metribuzin to help determine that the resistance is metabolism-based, likely due to P450 enzyme activity.

Target site resistance in ryegrass is very common with other herbicides but is quite rare for the PSII herbicides such as Atrazine and Metribuzin. Can we exploit this?  One of the interesting aspects of this research is that the P450 inhibitor can effectively reverse this low-level resistance. Could this lead to solutions in the future to help farmers control using a herbicide plus P450 inhibitor? Read more 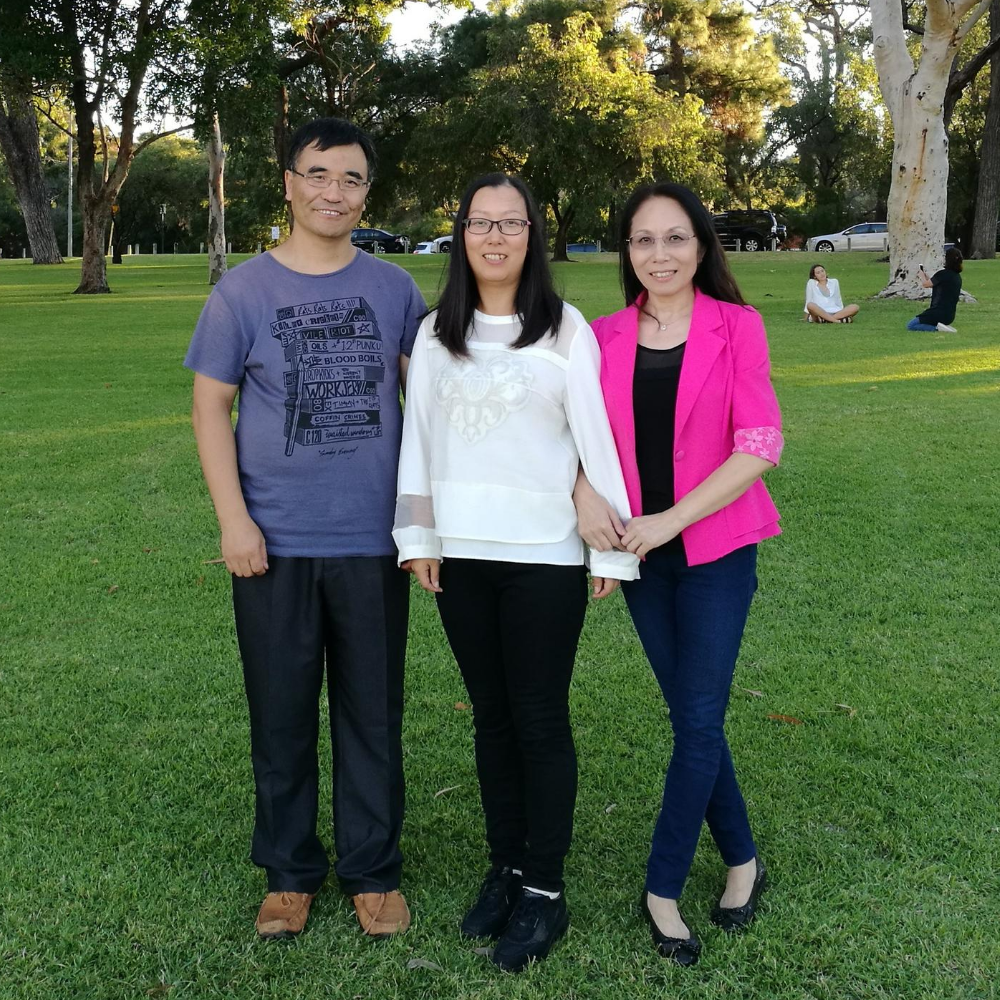 The table below shows that the ryegrass population studied in this research had only about 3 fold resistance. This can be seen in the difference in LD50 (the dose to control 50% of the population) between the Resistant ( R) and Susceptible (S) populations.  It is also interesting that the LD50 is similar for Atrazine and Metribuzin. This will surprise plenty of farmers and agronomists. Perhaps we have never applied metribuzin at a high enough rate to make this observation due to crop safety limitations.

The addition of the P450 inhibitor PBO reduced the LD50 of both the resistant and susceptible population. This was the first clue that the resistance was metabolism based.

Table 1: LD50 dose for Atrazine or Metribuzin plus and minus the addition of a P450 inhibitor (PBO) for Susceptible (S) or Resistant ( R) populations.

There are several P450 inhibitors used in this type of research. The P450 inhibitor PBO is piperonyl butoxide.  This compound was discovered in the late 1930’s and is a synergist used in insecticides. It has no insecticidal activity of it’s own but it enhances the activity of other insecticides such as pyrethrum and synthetic pyrethroid by, you guessed it, inhibiting the P450’s of insects.

One of the challenges that we have when we attempt to use P450 inhibitors in the field to reverse resistance in the weeds, is that we also reverse the resistance (tolerance) of the crop. We may improve weed control but we kill the crop as well.  However, given that we are talking about controlling ryegrass in a broadleaf crop such as canola or pulses, there may be some hope that we could reverse the PSII resistance in ryegrass without adversely affecting the crop. It’s a long shot, but these applications are always in the minds of researchers who are striving for some practical application of their research.

The dose response curves below clearly demonstrate how the response curve of the resistant plants shifts to the left when the P450 inhibitor PBO is added. Ryegrass in this research was grown in pots to the 2 to 4 leaf stage before spraying with Atrazine or Metribuzin. 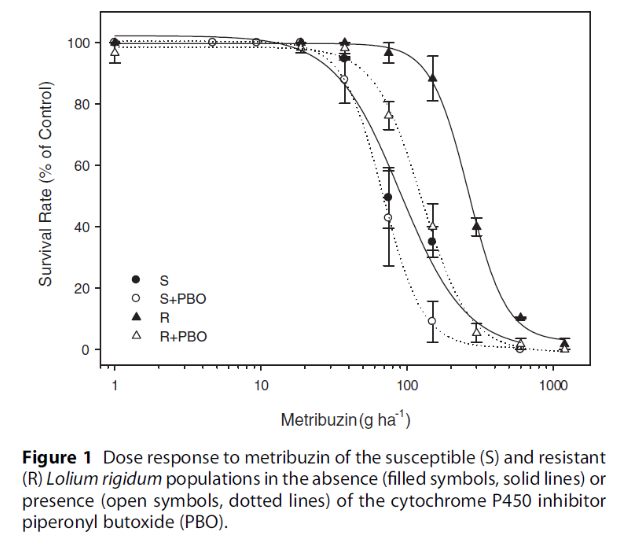 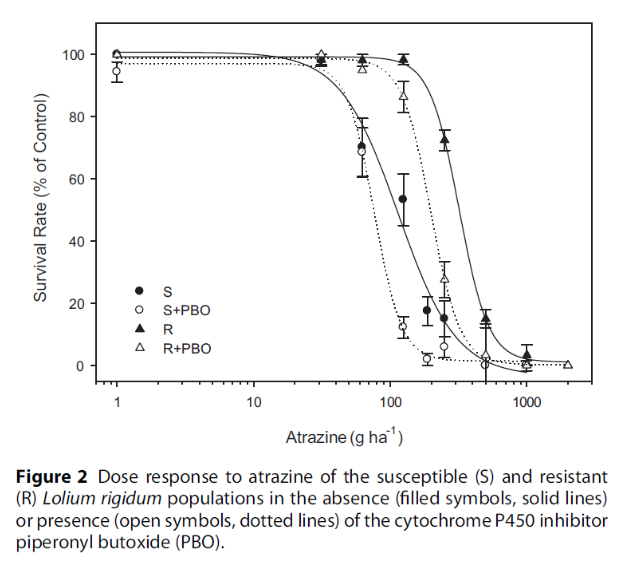 Even if we could discover a registered P450 inhibitor that was safe to the crop, there are practical challenges. The PBO was applied at 2.1kg/ha one hour before treatment with metribuzin or atrazine. This is a high product rate and timing the application one hour before the herbicide is not practical in a broad acre sense. However, it is possible that a lower rate of insecticide in a mix with the herbicide could work and further research is required to develop such a practice.

To determine the mechanism of resistance the researchers must rule out other possibilities.

It wasn’t metribuzin uptake or translocation

To rule out uptake or translocation the researchers treated ryegrass plants with radioactive 14C labelled metribuzin then used phosphor imaging to measure the movement of the herbicide. This confirmed that uptake and translocation of metribuzin was similar between resistant and susceptible plants.

The researchers also sequenced the genes of 16 resistant plants and 5 susceptible plants, finding none of the common mutations that confer target site resistance.

There was evidence of increased metribuzin metabolism

The use of 14C labelled metribuzin revealed a 2.3 fold increase in the amount of metribuzin metabolites found in the resistant compared to susceptible plants 72 hours after treatment. This tells us that metabolism is at play, and the P450 inhibitor research suggests that the metabolism is P450 based.