A perfect storm is brewing for what could potentially be another big herbicide resistance problem in Australia.

The Group B herbicide sulfosulfuron (Monza®) is about to get a lot cheaper, and many growers are looking to increase their use of Group B Imi tolerant barley and wheat varieties in the near future. Past experience tells us that reducing the price often results in dramatic increases in the use of a given herbicide. This is likely to have a big impact on the evolution of Group B resistance in brome grass and barley grass.

AHRI researcher Mechelle Owen found that 13% of the brome grass samples from the 2010 WA grainbelt herbicide resistance survey were resistant to Monza® but there was no cross resistance to Imi herbicides.

Brome grass self-pollinates. This means that the movement of resistance genes may be slower compared to a cross pollinating species such as annual ryegrass.

Weeds very easily evolve resistance to Group B herbicides such as Monza® (SU) and Imi (Imidazolinone) herbicides. There are several different gene mutations that cause resistance and they naturally occur at a high frequency.

During the 2005 survey of the Western Australia grainbelt, AHRI researcher Mechelle Owen found six samples of brome grass that she confirmed to be resistant to Monza®. The populations had low-level resistance that was likely due to enhanced metabolism by P450 enzymes. Enhanced metabolism was indicated by spraying the brome grass with a P450 inhibitor, the insecticide malathion. Researchers use malathion to turn off the P450 enzymes to determine if a plant is resistant due to P450 enzymes. Brome grass was sprayed with malathion 30 minutes prior to spraying with Monza® and the resistance was reversed. 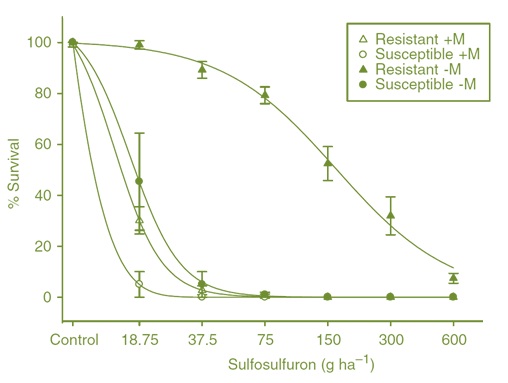 Figure 1. Dose response curve of resistant and susceptible brome grass sprayed with Monza® plus (+M) and minus (-M) malathion.

We know what you are thinking, lets mix malathion with Monza® – problem solved! That is a really bad idea for three reasons:

In the 2010 resistance survey of the WA grainbelt, Mechelle collected 91 samples of brome grass from the 466 paddocks that she sampled. Twelve populations were resistant to Monza® (sulfosulfuron) and Oust® (sulfometuron).

Figure 2. The distribution of brome grass in Western Australia in 2010. Red dots denote populations with greater than 20% resistance to Monza®.

The 2010 survey found that there was no cross resistance between Monza® and the Imi herbicides Intervix (Imazamox + imazapyr). Figure 3. The percent of brome grass populations that have evolved resistance to a range of herbicides in 2010.

A random survey of the South Australian Mallee region in 2012 by Dr Chris Preston and Dr Peter Boutsalis from the University of Adelaide has found high levels of Group B resistance in brome grass. Fifty percent of the brome grass populations from the Northern and Southern Mallee regions were resistant to the group B (SU) herbicide Atlantis® (mesosulfuron). There was no resistance to Imi herbicides detected in this random survey, however, Imi resistant brome grass has been confirmed from other populations in the region sent in by growers where a spray failure was observed.

Chris believes that this high level of SU resistance in brome grass has come about due to the cereal dominant cropping system in this area. Many growers have heavily relied on the Group B herbicides Glean® and Logran® in the Mallee for many years. While these herbicides do not achieve high levels of brome grass control, they are likely to have placed low-level selection pressure on brome grass for many years. In addition to this, the selective herbicides such as Atlantis®, Crusader® and Monza® (all Group B herbicides) have been relied upon heavily in recent years in this cereal dominant cropping system. The use of Imi herbicides in this region has been limited due to the high cost, however, the cost Clearfield® has come down over the past two to three years which has seen more growers beginning to use this technology and the use of Imi herbicides is starting to increase. This trend is likely to continue.

Table 1. Results of a random survey of Brome Grass in the Mallee region of South Australia.

Why was no resistance to Imi herbicides detected?

This tells us that the mutations that endow Imi resistance are out there, and when we start using a lot of Imi herbicides we will see resistance soon after.

What does it all mean?

We need to develop a robust package of tools to use for brome grass to compliment these herbicides. We know that harvest weed seed control is not as effective on brome as other weed species due to early shedding of seed. Past experience tells us that brome grass hates competition, we need to exploit this weakness, and we need to develop other strategies to stay ahead of the game.