Something old, something new in annual ryegrass control

It’s a quaint tradition that many brides follow – ‘Something old; represents continuity with the past and ‘Something new’ offers optimism for the future. ‘Something borrowed’ passes on another’s secrets for success and ‘Something blue’ represent key features of a solid relationship. Finally, ‘A sixpence in your shoe’ for prosperity. 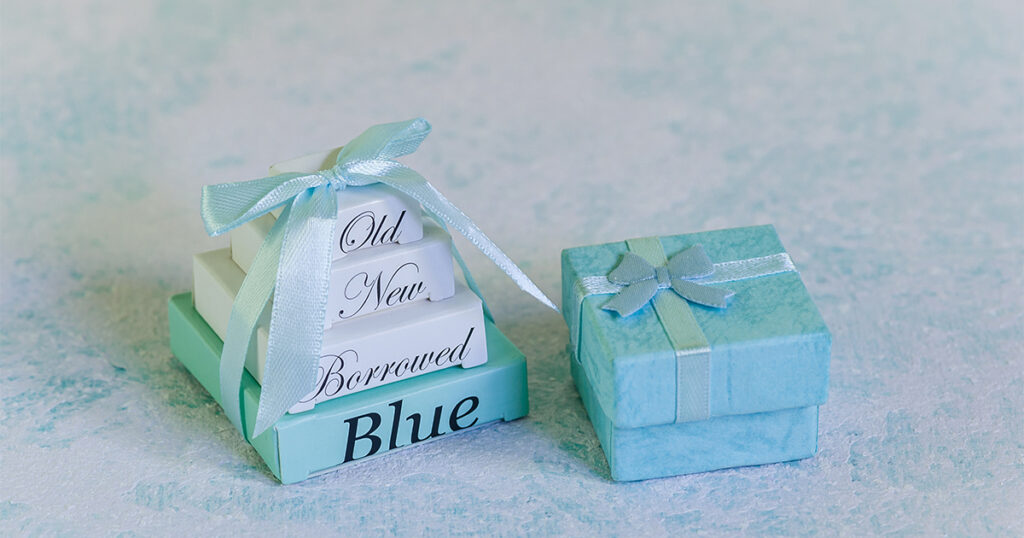 With the release of several new modes of action and chemical formulations, it’s helpful to first consider how these ‘new’ chemicals might revive some ‘old’ chemistry. Some herbicide resistant learnings are ‘borrowed’ and used to build a solid or ‘blue’ stewardship program for each farm. With a ‘sixpence in your shoe’ ensuring the best weed control bang for your buck when using more expensive products. 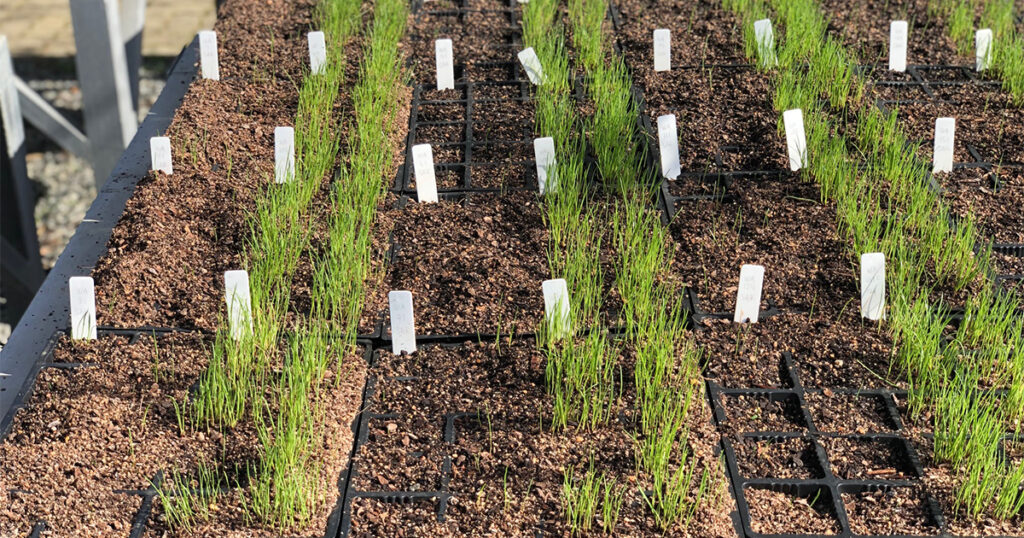 Pre-emergent herbicides are now a central component of annual ryegrass control in no-till farming systems. Recent findings by the University of Adelaide have confirmed that populations of ryegrass from the Eyre Peninsula, South Australia have resistance to all the available pre-emergent herbicides, albeit some at low levels – triallate (Group J, Avadex®), prosulfocarb (Group J, Arcade®), trifluralin (Group D), propyzamide (Group D) and pyroxasulfone (Group K, Sakura®).

Metabolic cross-resistance is a serious threat to the future use of pre-emergent herbicides. For example, some of the annual ryegrass populations with widespread resistance to other herbicides already have low-level resistance to some of the new chemistry coming to market.

Australian researchers have been on the front foot with testing the new chemistry prior to release to better understand the features of the new products and how they can be used in a robust integrated weed control program.

So, what are the new chemicals?

Dr Chris Preston (School of Agriculture, Food & Wine, University of Adelaide) provided an overview of the new pre-emergent herbicides that have been recently released or that are likely to be released in the next year or two for control of annual ryegrass.

New grass pre-em herbicides that include control of annual ryegrass

Luximax from BASF is a new mode of action herbicide (currently Group Z), containing cinmethylin. Luximax is a pre-emergent herbicide for annual ryegrass control in wheat, but not durum. It will provide some suppression of brome grass and wild oats. In Chris’ trials, control of ryegrass was as good as Sakura.

Mixtures with trifluralin, triallate and prosulfocarb are good and can provide some additional ryegrass control; however, mixtures with Sakura, Boxer Gold or Dual Gold® are likely to cause crop damage and need to be avoided.

Overwatch, active ingredient bixlozone, from FMC, is a Group Q herbicide that will be available for 2021. Overwatch controls annual ryegrass and some broadleaf weeds and is registered in wheat, barley and canola. Suppression of barley grass, brome grass and wild oats can occur. The level of ryegrass control in Chris’ trials was just behind Sakura.

Mixtures with other herbicides can increase control levels and in their trials in the high rainfall zones, the mixture of Overwatch plus Sakura has been very good.

Devrinol-C, active ingredient napropamide, is a Group K herbicide from UPL registered in 2019 for annual grass weed control (including annual ryegrass) in canola. Devrinol-C offers an alternative pre-emergent herbicide to propyzamide or trifluralin for canola.

Voraxor, from BASF, contains the active ingredients trifludimoxazin and saflufenacil, which are both Group G herbicides. Voraxor will provide broadleaf weed control and some annual ryegrass control as a pre-emergent herbicide in cereals.

Voraxor will be best used where broadleaf weeds are the main problem and annual ryegrass populations are very low. Grass pre-emergent herbicides cannot be tank-mixed with Voraxor and will have to go out as a separate application.

Ultro, active ingredient carbetamide, from Adama, is a Group E herbicide that will be available from 2021. Ultro will be registered for the control of annual ryegrass, barley grass and brome grass in all pulse crops. Although the active ingredient was registered previously in Australia for turf and pasture, this is the first product seeking registration using this active ingredient in grain production and it is a new formulation and use pattern.

BAY167 is a new product under development from Bayer. It will contain a new mode of action and is a pre-emergent and early post-emergent herbicide for the control of grass and some broadleaf weeds in wheat and barley. Registration is expected in 2022.

AHRI’s Dr Roberto Busi conducted extensive herbicide resistance testing on 140 populations of annual ryegrass in WA to demonstrate that two-way herbicide mixtures (at the highest recommended label rate) can provide highly effective control. Seed used in this research was collected from weeds found in cropped paddocks that the grower or agronomist considered problematic in terms of herbicide resistance.

The testing of single pre-emergent herbicides and mixtures showed that two mixtures – 1. trifluralin + triallate and 2. pyroxasulfone + triallate were highly effective. Survival rates were very low for the mixtures and all populations were found to be 100% susceptible to these two mixtures.

In a separate screening trial, Roberto tested cinmethylin (Luximax) standalone versus cinmethylin mixed with trifluralin on a reduced set of ryegrass populations. In both cases, survival was very low but still, the mix performed better than the standalone herbicide. 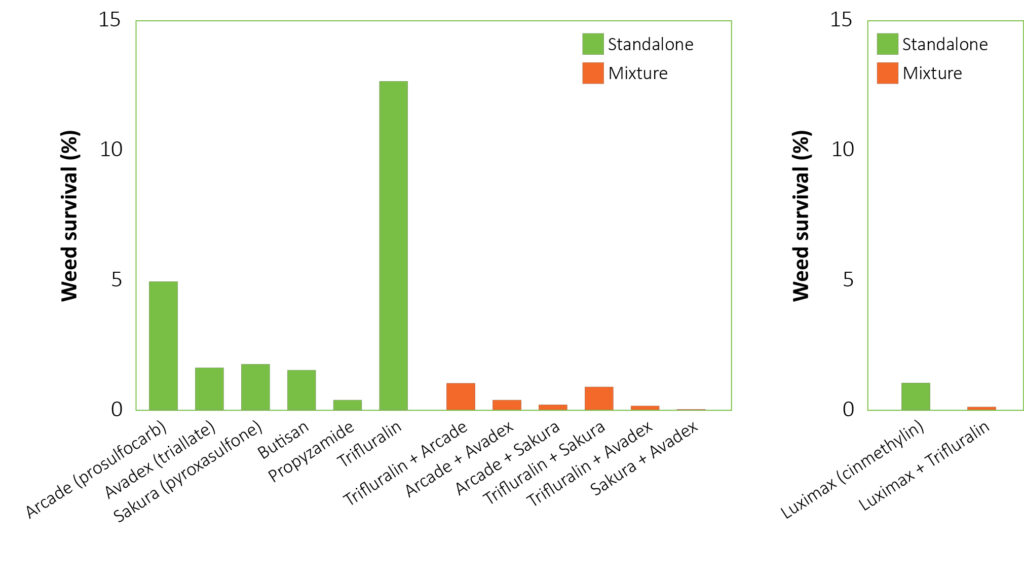 Left: Mean plant survival (%) observed across 140 field populations of annual ryegrass collected in Western Australia in 2018–2019 and tested for herbicide resistance at the recommended label dose to six PRE-standalone herbicides versus six binary mixtures of the same herbicides. Right: Mean plant survival observed in a reduced set of ryegrass samples and tested for resistance to a new herbicide (cinmethylin) standalone and in a mixture with trifluralin. 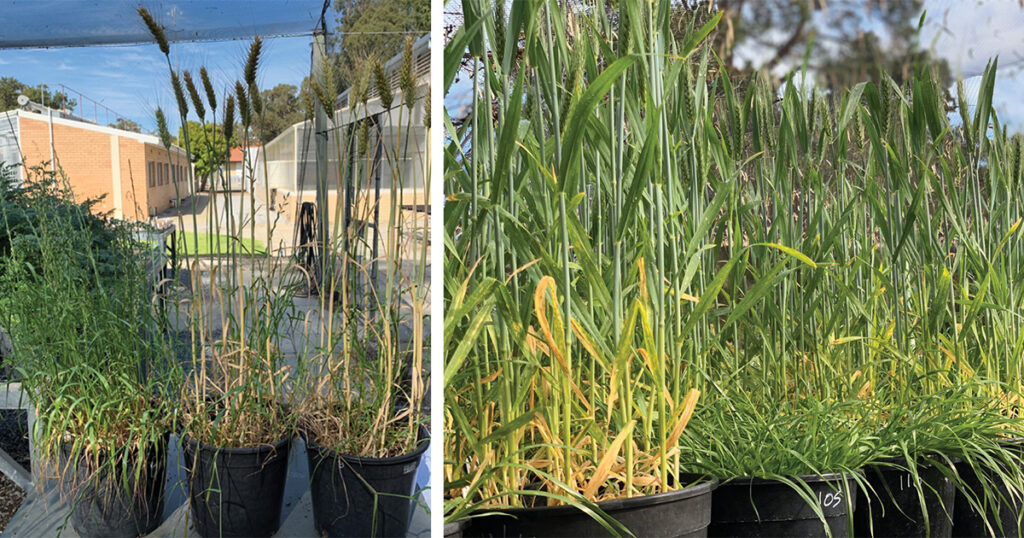 Growing a competitive crop reduces weed seed production even without herbicide. These pots are from the control treatment (no herbicide): From left to right, 0, 150 and 300 wheat plants/m2.

How to hang on to the new herbicides

None of the shiny new products offers growers a weed control panacea. They do, however, add diversity to the weed control toolbox for annual ryegrass and some extra flexibility in use patterns. With some clever planning, these products can help ‘bring back’ some previously lost chemistry using the mix and rotate tactic, extending the effective life of a broader range of herbicide options. When coupled with some non-herbicide tactics the grower can regain control of herbicide resistance on their farm and operate in a low-weed situation.

New chemistry – what’s new, what’s coming and how to keep them for longer, by Greg Condon, Feb 2020 GRDC Update https://grdc.com.au/resources-and-publications/grdc-update-papers/tab-content/grdc-update-papers/2020/02/new-chemistry-whats-new,-whats-coming-and-how-to-keep-them-for-longer

The research summarised here was made possible by the significant contributions of growers through both trial cooperation and the support of the GRDC.