“Washington is not a place to live in. The rents are high, the food is bad, the dust is disgusting and the morals are deplorable. Go West, young man, go West and grow up with the country”. Horace Greeley, 1865.

Horace believed that going west to fertile farm land would be the answer to poverty and unemployment in the USA. Sowing west could be part of the answer to weed management.

There is a new kid on the block in the competition between crops and weeds, and the best thing about it is that it is FREE! East-west sowing is a simple technique for southern Australian grain growers to help the crop shade the weeds.

Dr Catherine Borger from the Department of Agriculture and Food WA recently investigated light interception by wheat and barley crops in east-west or north-south crop row orientations. She found that east-west sowing halved the ryegrass seed set with no effect on grain yield by reducing the amount of sunlight available to the weeds.

As herbicide resistance increases in Australia we must use more non-herbicide weed control tools to guarantee the future of intensive cropping.

It is not for every paddock or every grower, but is a great option for suitable paddocks and growers with good sunglasses. Check it out in your own fields this year.

How does it work? 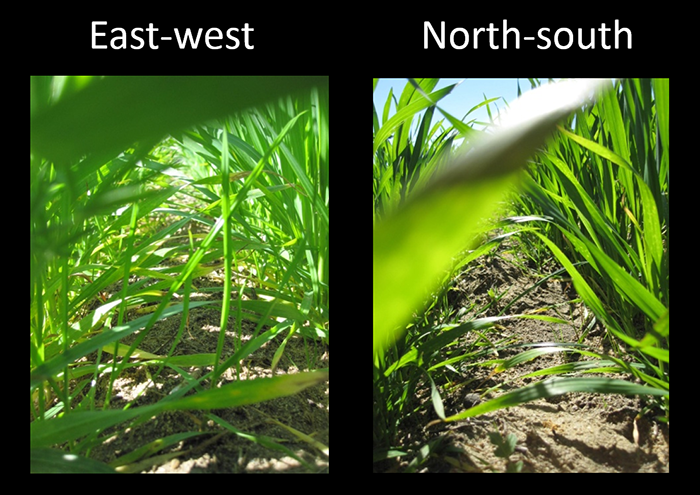 Figure 1. Sowing east-west (left) in winter in Australia allows the crop to shade the weeds more than north-south facing crops (right) due to the winter sun being lower in the sky.

Every grain grower has seen how well weeds grow when they have a blocked seeding tube creating extra-wide row spacing. Instinctively, we all know how important crop competition is for good weed management. We now have good research data to back up this instinct.

The origins of E-W sowing

Crop row orientation is certainly not a new technique! It has been researched in a range of crops (from wheat to grapevines) in the USA from the 1950s. Professor Stephen Powles, AHRI Director, was first exposed to the concept during his days as a crop science postgraduate student at Michigan State University, where one of his professors was conducting E-W versus N-S soybean planting. For many years this technique was not relevant in Australian broad-acre cropping because our growers sowed their fields round and round and not up and back.

Fast forward to 2002 in Western Australia where DAFWA researchers Shahab Pathan, Abul Hashem and Catherine Borger began investigating the concept in wheat and barley at Avondale and Merredin. This ultimately all led to further research being conducted by Catherine between 2010 and 2012 as an AHRI / DAFWA collaborative project. With up and back sowing now common in Western Australia, the culmination of all of this research is now very relevant. 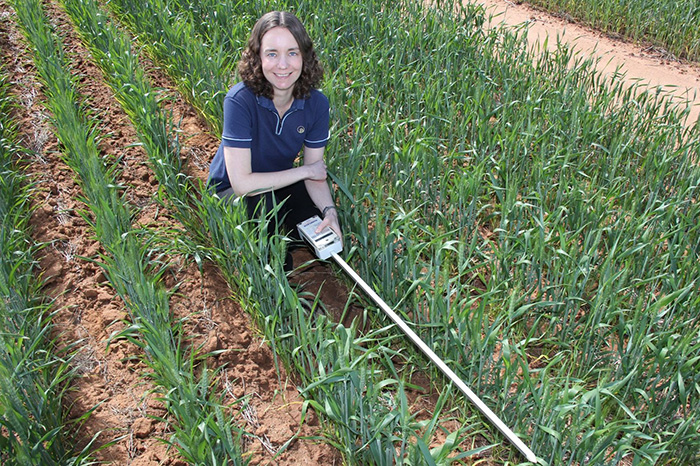 Dr Catherine Borger is a research officer with the Department of Agriculture and Food, Western Australia (DAFWA) based in Merredin. She conducted research on several aspects of crop competition between 2010 and 2012. She found, as others have in the past, that high cereal seeding rates increased crop competition with weeds, reducing ryegrass seed production, and that barley competes more with weeds than wheat. However, her research into crop row orientation was of particular interest as it represents free weed control.

Ryegrass seed production was halved by sowing east-west compared to north-south. Catherine found an average ryegrass seed production of 2968 seeds/m2 in east-west crops, compared to 5705 seeds/m2 in north-south crops. The only exception was Katanning in 2010 where the ryegrass emerged two weeks after the crop, ensuring that the crop was highly competitive (regardless of crop orientation or seeding rate). 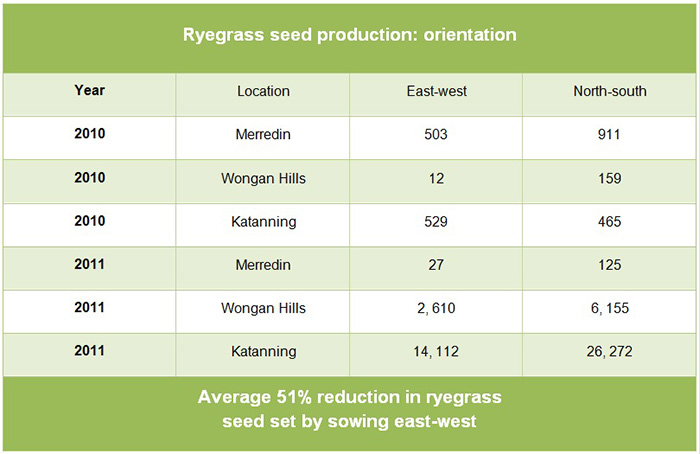 These field trials were conducted at DAFWA Research Stations located in Merredin, Wongan Hills and Katanning, in 2010 and 2011. In 2010, three trials investigated crop row orientation and seeding rate (Wyalkatchem wheat at 60 or 120 kg/ha). In 2011, trials investigated orientation, crop type (Wyalkatchem wheat or Buloke barley) and seeding rate (50 or 100 kg/ha). Of particular importance is that ryegrass seed production was reduced despite dry years (such as Merredin 2010).

Sowing east-west in winter in southern Australia reduced the light available to annual ryegrass in the inter-row compared to north-south crops at all measured growth stages of ryegrass. 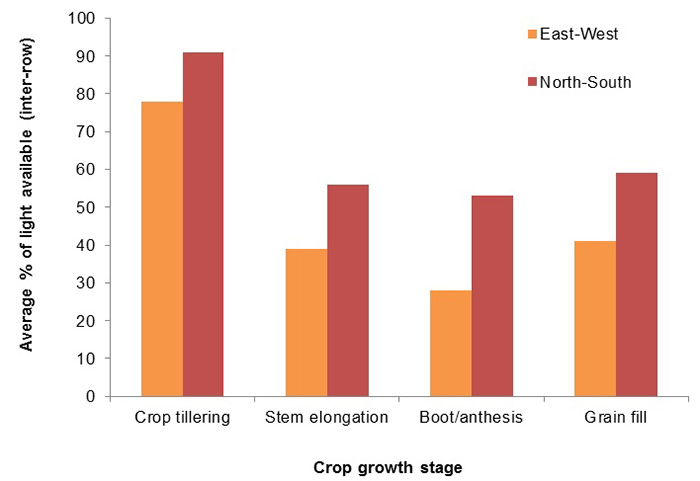 Figure 2. Average percentage of light (as photosynthetically active radiation) available to the annual ryegrass canopy in the inter-row space for east-west (orange) and north-south (red) crop row orientations measured at noon (during 2010 and 2011). Expressed as a percent of total light available to the crop canopy.

This research found, as many others have in the past, that high cereal seeding rates suppress weeds. Increasing the seeding rate from 50kg/ha to 100kg/ha halved the ryegrass seed set. The same result as east-west sowing. The main difference being that this increase in seeding rate increases cost by approximately $20/ha whereas east-west sowing does not increase the cost at all. Crop seeding rate didn’t influence the amount of light available to the annual ryegrass canopy in the inter-row space. 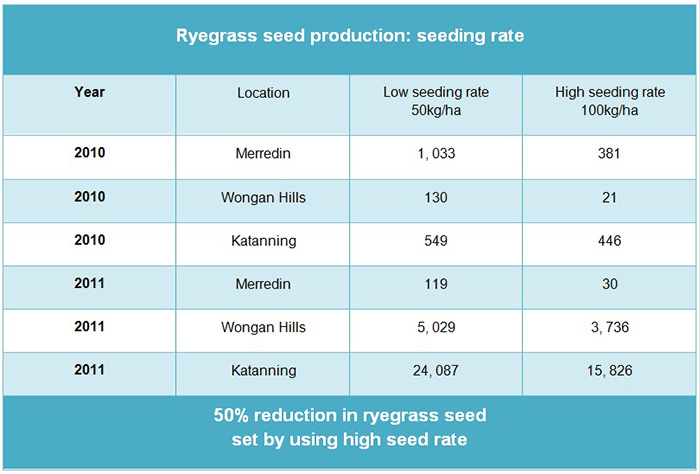 So begs the question, should we aim to sow east-west at high cereal seeding rate to maximise competition? There was an additive effect of seeding rate and orientation at some sites but not others. Why? Catherine explains it like this: “Perhaps there is a limit to how much the crop can compete with weeds and adding more and more competition may not continue to suppress the weeds further”. This will be an area of future research to help growers decide what is the most cost effective way to achieve adequate crop competition.

Wheat yield was largely unaffected by crop row orientation because ryegrass numbers were generally too low to impact crop yield. 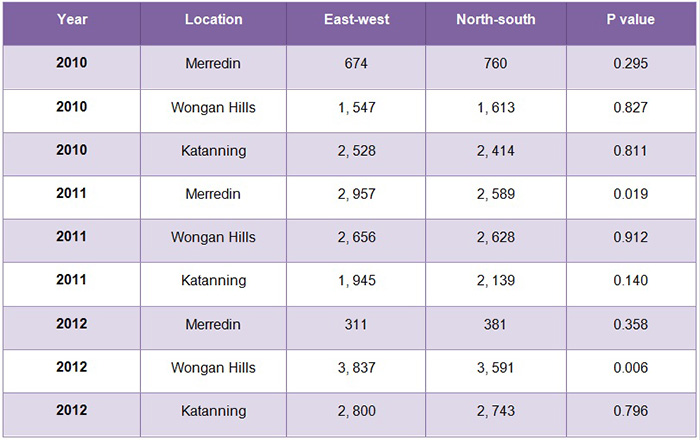 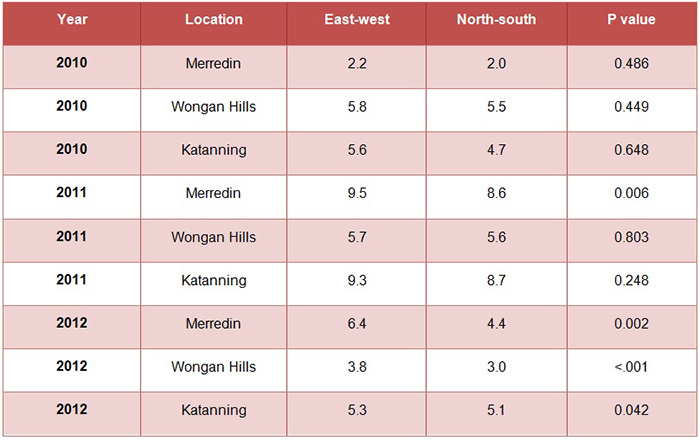 Crop type (wheat or barley) was measured in 2011 and influenced light availability at Merredin and Katanning for both east-west and north-south crop orientations, but not at Wongan Hills. There was reduced light available to the annual ryegrass canopy in barley compared to wheat. This was consistent throughout the year, from tillering to grain fill (Table 1).

Table 5. Percentage of light available to the annual ryegrass canopy in barley and wheat crops at both Merredin and Katanning.

Seed production was lower in barley crops than wheat crops at both Merredin and Katanning (in 2011). However, the cultivars used (Wyalkatchem wheat and Buloke barley) are both uncompetitive against weeds.

Research by Gardner, Mortell and Morphette from the NSW DPI, Tamworth found similar results. They found that East-west sowing of barley reduced weed biomass by 39% compared to North-south. In this research Canola was sown as a surrogate weed. They also found that crop yield was reduced by 6 to 7% when sowing east-west compared to North-south in the absence of weeds. The reduction in weed biomass could be further improved by using a more vigorous variety. Skipper barley significantly reduced weed biomass by a further 30% and 42% for the N-S and E-W row orientations, respectively, compared to Hindmarsh barley.

Most of us now realise that to achieve true weed control success we need to add non-herbicide tools into the mix. It doesn’t matter which weed, which crop, or which country we are talking about, the benefits of good cultural practices apply everywhere.

Sowing east-west may not be practical for all paddocks, for example, if you don’t use autosteer technology (difficult to drive directly into the sunrise/sunset at seeding/spraying/harvest), or if your field shape doesn’t suit east-west orientation, but it is a great form of free weed control in suitable paddocks.

It’s too late for most crops for this year, but you can observe the effect in your own fields by inspecting them in the middle of the day.

Help give your crop the upper hand and let it be a united front against weeds!