Every year in Australia, we hold a national meeting where scientists researching weed, insect and disease resistance get together to share their knowledge and learn from each other. It’s a bit like a meeting between firefighters, police and ambulance workers. Same objective, different issues.

After the first of these meetings, I came away and thought, “thank goodness I’m working on weeds, at least they stay roughly in the same place and we can target the seed bank!” The researchers and agronomists are all working on the same thing, resistance, but are the management practices the same or different?

A recent review paper by Hugh Beckie and Roberto Busi from AHRI, along with Fran Lopez-Ruiz (CCDM) and Paul Umina (Cesar Australia), concluded that the management strategies are more common than they are different.

Everyone loves “mix and rotate”, but there are differences in attitude to rates. Weeds stay in roughly the same place, making the seed bank the target, but insects and plant diseases move around, making regional management more important. The management of herbicide and antibiotic resistance are very similar, but the consequences of failure are very different!

Even though weeds, insects, plant disease and human diseases are vastly different from one another, the way resistance evolves is the same. Rare genetic mutations, that happen randomly, are then selected for by the use of chemical or medicine. However, insecticide and fungicide resistance is mostly due to target site mutations, whereas herbicide and antibiotic resistance are due to both target site and non-target site resistance.

We have given herbicide mixing a big push in recent years for good reason and with good results, however, we are very aware that this brings extra cost and complexity to farming, which is a limitation to adoption. 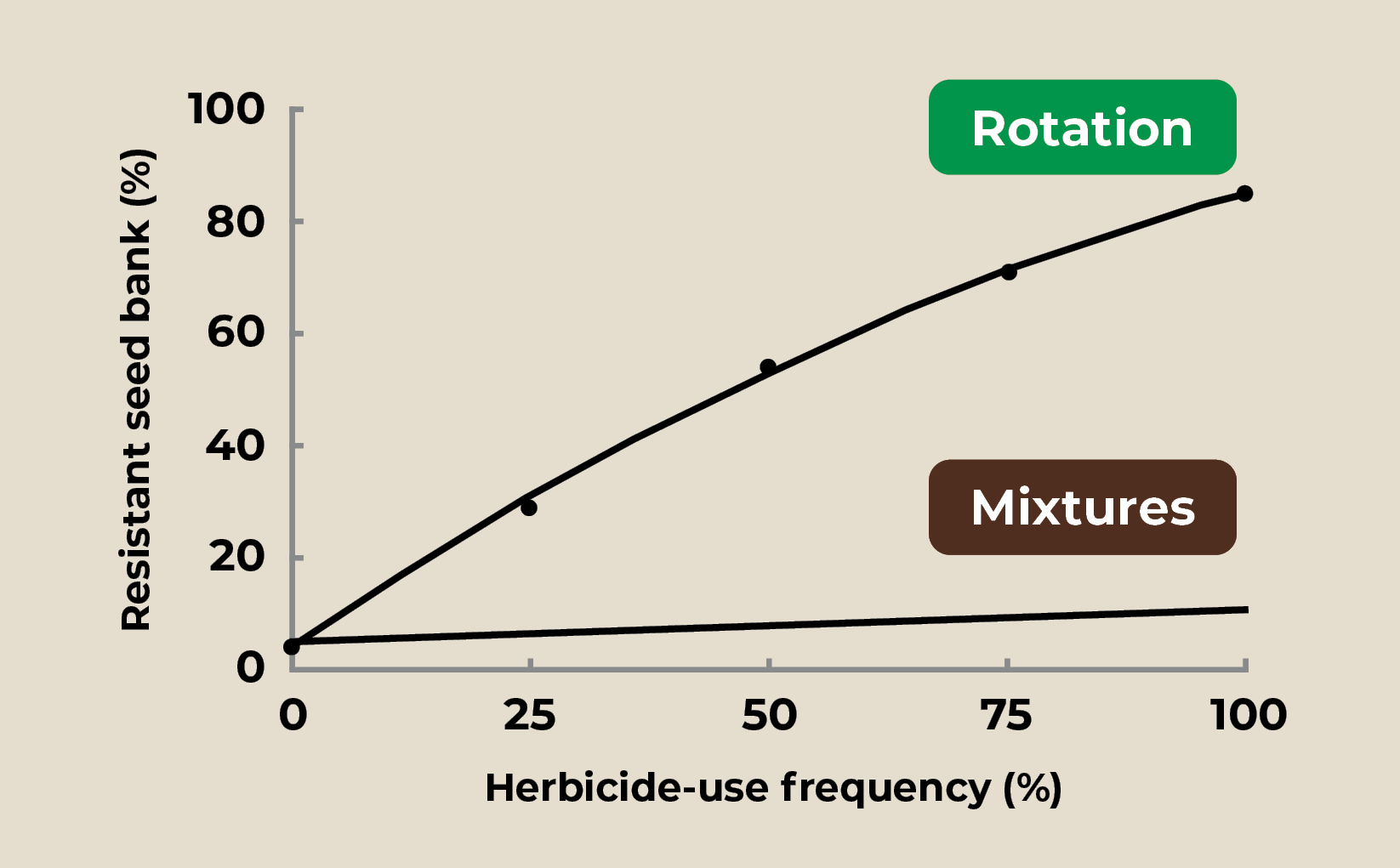 Effect of herbicide mixtures versus rotations on the herbicide-resistant seed bank of Thlaspi arvense L. (field pennycress) in western Canada.

Everyone thinks that rates at the higher end of the product label are the best idea, except for fungicide resistance. Modelling shows that lower rates of fungicide may be a good idea where there is low disease pressure, and the crop variety has good disease resistance levels.

Penicillin was rolled out in 1945, and the first case of penicillin resistance was documented in 1947. This is because bacteria have a very short generation time, allowing the resistant individuals to build up and dominate the population very quickly. This is the same for insects and plant diseases, but not weeds. Weeds only reproduce once per year (in most situations) which slows the evolution of resistance.

Weeds largely stay in the same place, spreading gradually as patches from year to year, whereas many insects have the ability to fly, and spores of crop diseases are often blowing around in the wind. For this reason, insects and diseases often have management that needs be rolled out across a farming region, rather than just a farm.

The table below shows that while there are some differences, the researchers concluded that there are more similarities than differences in the management of herbicide, insecticide, fungicide and antibiotic resistance in management, and thus researchers from different disciplines can learn from each other. 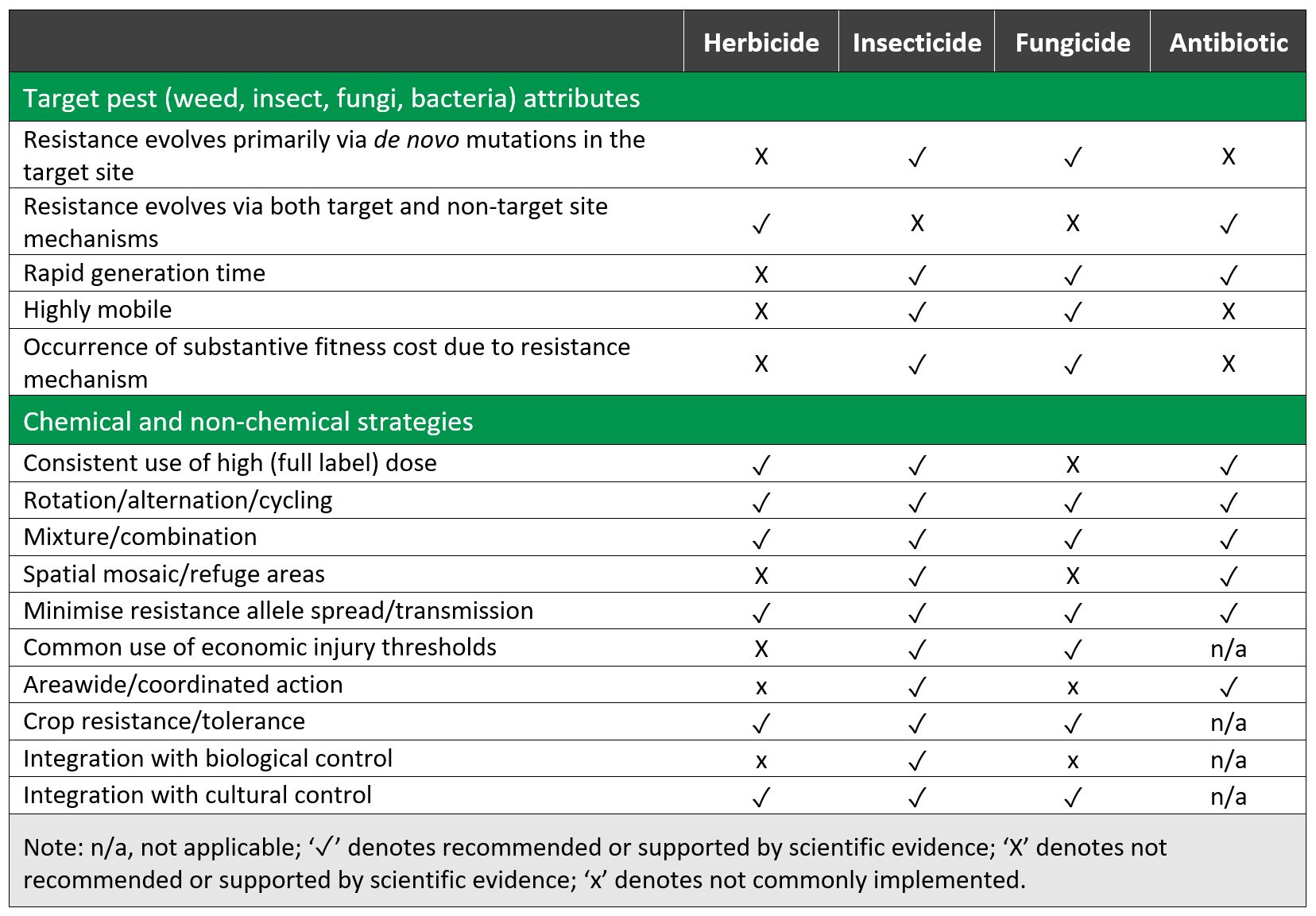 There was a great moment during one of the cross-discipline meetings in Australia when an insecticide resistance researcher realised that they had discovered exactly the same resistance gene as a weeds researcher. This was a stark reminder that while there are vast differences between weeds, insects, plant disease and bacteria, there are large similarities in what is causing the resistance, and therefore the management that is required. Collaboration is a modern buzz word in modern business, and this is a great example of how working together will improve our understanding and management of resistance management, whatever the pest or disease.

Herbicide resistance management strategies: How do they compare with those for insecticides, fungicides and antibiotics?