Many young people don’t like the taste of beer, but they know if they work hard, endure the awful bitter taste and hideous hangovers for a few years, they will eventually like the stuff. It takes effort, but if they stick at it long enough they can get there.

And, believe it or not, you have to work pretty hard to evolve resistance in wild oats. But if you stick at the same practice long enough (it takes effort), you can get there!

We have previously reported AHRI research showing that wild oats evolve resistance slowly because they are both hexaploid and self-pollinating (see here and here).

Now we have more evidence of this from AHRI researcher, Mechelle Owen, through her GRDC funded work in the Western Australian resistance surveys.

Every five years, Mechelle travels through the WA cropping region collecting samples of a range of weed species at random locations. The remarkable story from this research is that wild oat resistance to Group A herbicides wasn’t any worse in the 2010 survey that it was in the 2005 survey.

In 2005, 71% of populations tested as resistant to Hoegrass. This was just 48% in the 2010 survey. In addition, Mechelle found no resistance to glyphosate, and just two Group B (ALS) resistant populations.

Given that we have hundreds of glyphosate and Group B resistant ryegrass populations, this is evidence that wild oats evolve resistance to herbicides slowly compared to ryegrass.

So what do we do with this information?

We formulate a well thought out herbicide mix and rotate plan for wild oats, and add some non-herbicide control.

Wide-spread resistance to ‘fop’ herbicides is very common in Australia because these herbicides were repeatedly used, year after year, with no other form of weed control.

If we work hard we’ll break another wild oat herbicide, but it doesn’t have to be this way.

Wild oats were predicted by many to be a growing problem in Western Australia, yet this problem hasn’t eventuated. Sure, plenty of growers have a wild oat problem, but generally speaking, it hasn’t progressed over the years as other weeds have.

Let’s cut to the chase.

The incidence of wild oat populations in Western Australia has remained about the same over the years, with 43% of fields visited in the surveys found to contain wild oats.

Many fields have low numbers of wild oats (fewer than 10 plants in the sample area) so they weren’t sampled for resistance testing.

It’s very rare for resistance levels to go backwards in these surveys, but that’s exactly what has happened here! A higher percentage of populations were resistant to Hoegrass® in 2005 than in 2010.

Resistance to other herbicides has also remained about the same from 2005 to 2010.

The graph below is a summary of resistance levels of wild oats from the 2010 survey to a range of herbicides. It’s pretty clear that there are a number of herbicides that are still effective for most populations of wild oats. 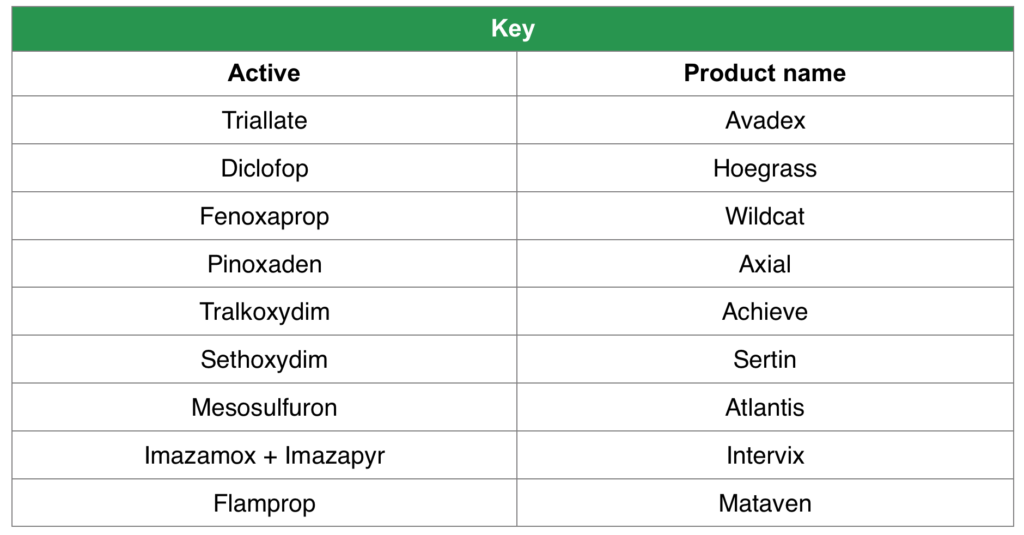 First Group B (ALS) resistance in wild oats in WA

This survey found what we believe to be the first Group B resistance in wild oats in Western Australia. Two populations were found to have survivors to Atlantis®, one of which was also resistant to the ‘imi’ herbicide Intervix®.

This comes as no surprise as weeds generally find it easy to evolve resistance to Group B herbicides. What it does show us, once again, is that wild oats evolve resistance slowly compared to ryegrass. Group B resistance in ryegrass was widespread in WA in 1998, whereas we’re only just starting to see this problem in wild oats now.

The map below shows where wild oats were found in the 2010 survey of WA. Wild oats are widespread throughout WA and they’re most prevalent in the central agricultural region (M3 / L3).

Past AHRI research by Qin Yu and Ahmad-Hamdani involved screening a number of the populations from the 2005 survey. They found different resistance profiles that were due to a range of target site mutations and enhanced metabolism of herbicide. It’s likely that many of the populations sampled in 2010 have both target site and non-target site resistance mechanisms, although this is yet to be investigated.

What about other states?

Peter Boutsalis from the University of Adelaide and John Broster from Charles Sturt University conduct similar surveys across South Australia, Victoria and Southern NSW with GRDC funding. Their surveys show fairly similar resistance levels to ‘fop’, Group B, and a range of other herbicides. They have also found that these resistance levels have only changed slightly over a five year period between surveys.  A random survey has never been undertaken in northern NSW and resistance levels are likely to be higher in this region. The region is set to be surveyed this harvest so we’ll find out soon enough!

How do we use this information to our advantage?

We now have several pieces of evidence that tell us that wild oats evolve resistance slowly in comparison to weeds such as annual ryegrass and wild radish. We also know that we have a range of herbicides that are still effective for wild oat control.

American research has shown clear benefits of mixing herbicides rather than just rotating herbicides and best practice is to mix and rotate herbicides wherever possible. This strategy is likely to be extremely successful for a weed such as wild oats.

A well thought out herbicide strategy that involves rotation, using pre-emergent and post-emergent herbicides, and mixes of products where possible will go a long way. We realise that this strategy comes at additional cost to just applying another dose of ‘fop’ each year, but it may be what is needed if growers would like to continue high intensity cropping in regions where wild oats prevail.

What about non-herbicide tools?

Wild oats do shed their seed more than ryegrass and radish, but in many cases, they do retain plenty of seed at the start of harvest, making harvest weed seed control an option for crops that are harvested early. Adding swathing to this can bring harvest forward and improve wild oat seed capture. And let’s not forget crop competition! All weeds hate competition from the crop. Yes, these options are hard… but they work!

Some of the options that growers are using to successfully manage wild oats include:

All of this adds up to DIVERSITY!

In many regions of Australia we have worked hard and successfully evolved resistance in wild oats, predominantly to Group A herbicides. It took a long, concerted effort, but we got there!

Wild oats find it hard to evolve resistance to herbicides, and we need to exploit this weakness and use it to our advantage.