HomeArticles2,4-D resistance – it’s all about perception

2,4-D resistance – it’s all about perception

The archaeologists who interpreted the Rosetta Stone don’t know how easy they had it! Compared to reading a scientific paper on 2,4-D resistance mechanisms, reading hieroglyphics is a walk in the park.

This AHRI insight is not for the faint-hearted. It is the work of AHRI researcher, Dr Danica Goggin who has dedicated many years to working out how auxin herbicides such as 2,4-D and Dicamba work, and how plants evolve resistance to them.

In simple terms, scientists believe that they have discovered a new way that auxin herbicides kill plants. It appears that there are receptors on the cell membranes that recognise 2,4-D which sets off a chain reaction inside the cells that causes the plant to try and grow like mad while photosynthesis is switched off, and the plant starves to death.

Danica’s research found that plants with fewer receptors on their cell membranes were resistant to 2,4-D due to reduced perception of the 2,4-D.

Putting this molecular biology research into words is challenging, so we have created some videos and a podcast that explain it.

The first step in understanding 2,4-D resistance is to understand how 2,4-D kills plants by checking out this video that we made in May 2016 (if you want, you can read the full insight here too). Transcriptional repressors are now known as monkeys around the AHRI corridors!

Since this video was made, researchers have discovered that there is perhaps another pathway for auxin herbicides to kill plants. I like to call it the “non-monkey” pathway, but the scientists have other terms. It’s too hard to put into words so check out the video below.

There is still a lot to do to fully understand the “non-monkey pathway” and it is the focus of research by an international team. What we do know is that our oldest synthetic herbicide, 2,4-D, is proving to be the hardest to understand and resistance to this herbicide appears to be from a combination of mechanisms, none of which have been observed for any other herbicide. There is always another mechanism of resistance!

The below graphic was generated by a website called STRING where you put in your protein of interest and it comes up with a network of all known interactions, which helps you to figure out what your protein of interest might be doing. In this case, the network showed Danica that LRK1 might be involved in auxin signalling, because the ARF2, PID2, ARF16 and LOP1 proteins are all auxin-related. Danica said that as an auxin nerd, she was very excited! 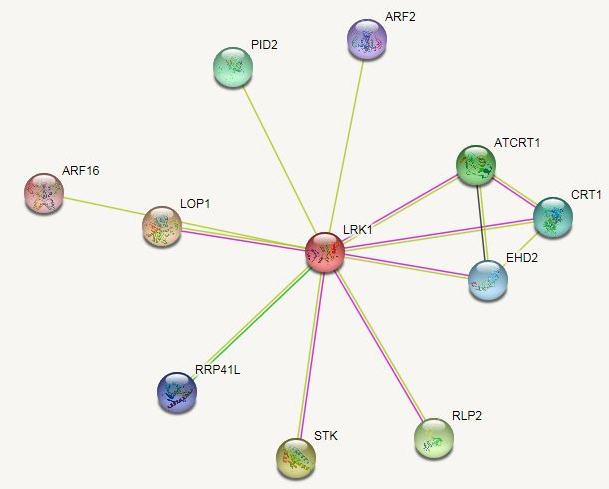 Proteins which are known to interact with the cell surface receptor (LRK1) whose abundance is correlated to 2,4-D and dicamba resistance (supplied by Dr Danica Goggin).