“Horror movie right there on my TV, horror movie it’s the 6.30 news”, Skyhooks

Weeds researchers and communicators can be a depressing bunch, always bringing out more bad news about the latest herbicide resistant weeds. A little bit like the 6.30 news, always focusing on the negative story.

We could say that the discovery of ALS (SU and IMI herbicide) resistant barley grass by AHRI researcher Mechelle Owen in the 2010 survey of Western Australia is a sign of things to come, and it is a major threat to cropping in the central wheatbelt.

This survey also discovered 12 brome grass populations that were confirmed to have metabolic resistance to SU herbicides, but with no cross resistance to the IMI herbicides.

Is your cup half full or half empty? Why does herbicide resistance evolve slower in these weeds compared to annual ryegrass? The other way to look at these numbers is to say that 345 fields were totally devoid of barely grass and 462 fields did not have detectible resistant barley grass. 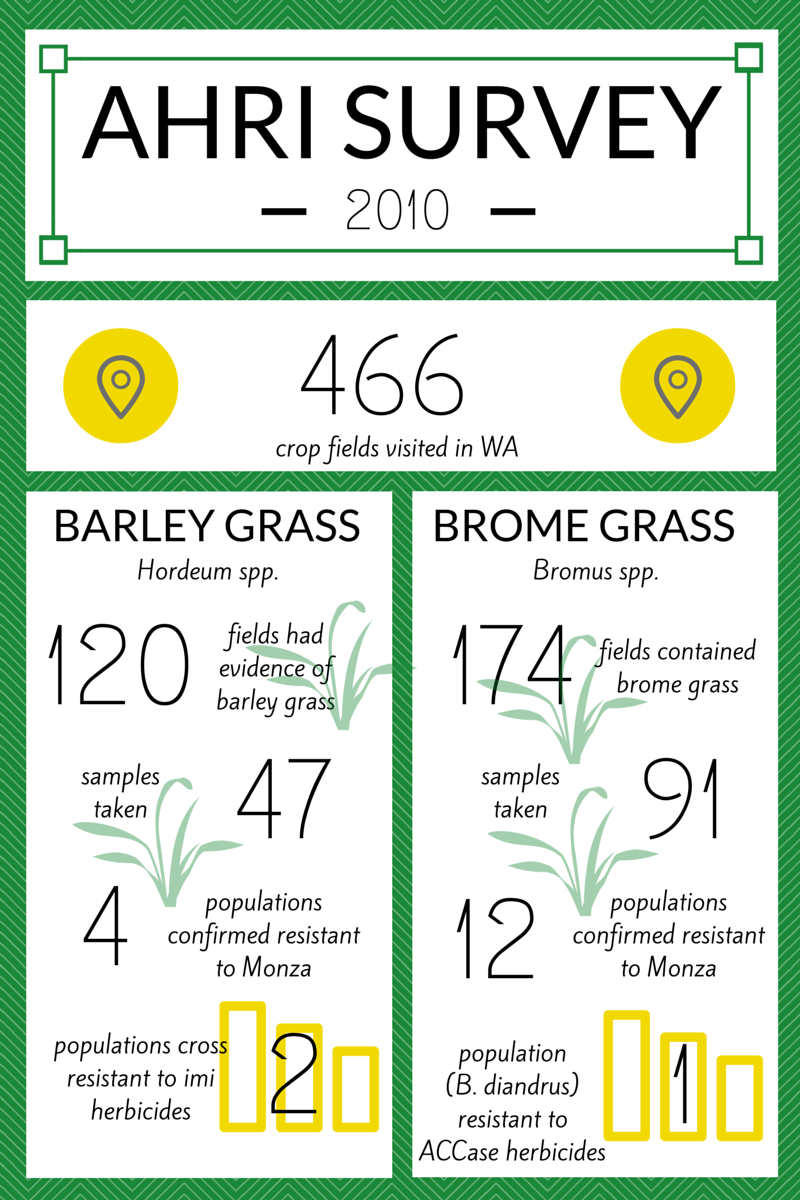 Slower evolution of resistance compared to ryegrass. Why?

Barley grass and brome grass are self-pollinating species, as are wild oats.

Charles Darwin told us that evolution occurs as a result of population size X genetic diversity.

The total number of barley grass and brome grass plants exposed to herbicides (most had very low field densities) is often less than ryegrass. Remember that ryegrass was deliberately sown by sheep farmers in Australia and it has the ability to set prolific amounts of seed.

And, in self pollinators, when an individual does evolve resistance, it keeps those genes to itself.

Another reason for the apparent low levels of resistance in brome grass and barley grass is the limited use of Monza® (sulfosulfuron) and IMI herbicides in Western Australia. The SU herbicide Monza® was relatively costly before it came off patent and so it was only used where absolutely necessary. The Imidazolinone (IMI) herbicides have been around for a long time, but have not been extensively used by growers due to only a few IMI tolerant crops being available until recently. Compare this to millions of hectares of ryegrass being exposed to chlorsulfuron or triasulfuron year after year. 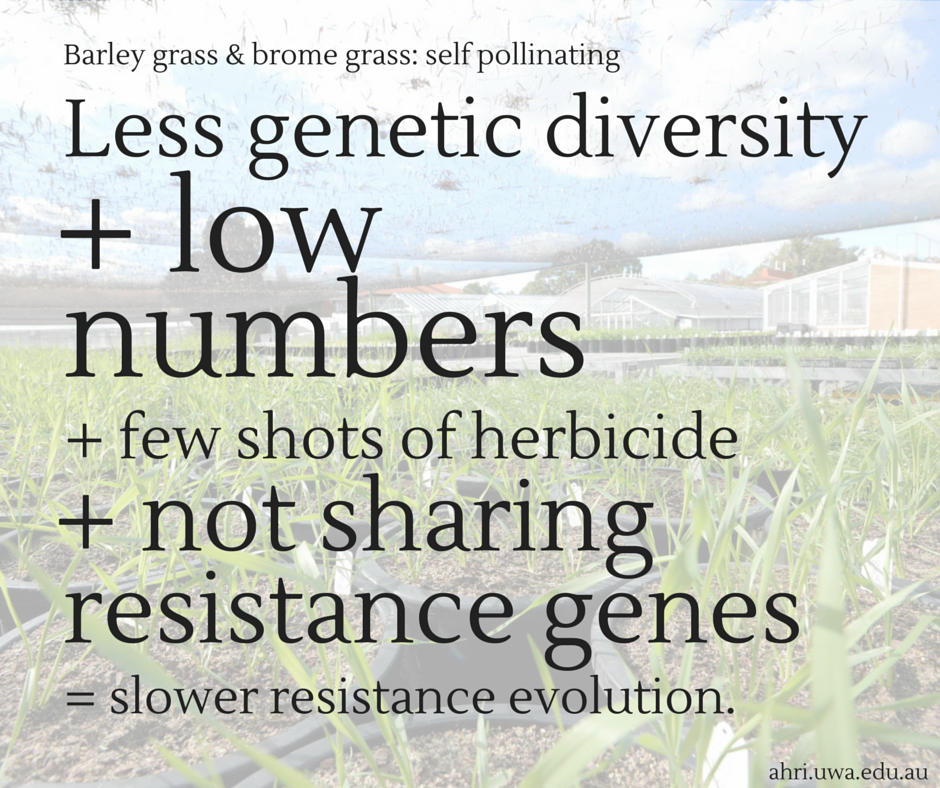 The first ever documented case of herbicide resistance in Australia was barley grass resistant to paraquat. Figure that one out. A self-pollinating species resistant to a herbicide that we consider in the low risk category. Goes to show that if you put your mind to it you can break any herbicide in any weed species. While these self-pollinating species do evolve resistance more slowly, they still evolve resistance. As the bumper sticker says, ‘He who dies with the most toys, still dies!’

We previously reported on this random brome grass survey in WA in the ‘Perfect Storm’ edition of AHRI insight. It is very interesting that the survey found 12 samples of brome grass that were Bromus rigidus and it was these 12 samples that were all resistant to the SU herbicides. This is a mystery, and we don’t have the complete answer as to why only B. rigidus was resistant and none of the B. diandrus populations were resistant.

Bromus rigidus is typically more common in the northern region of the WA wheatbelt and is known to be more dormant (see papers here, here and here). It is possible that this species of brome grass is more likely to emerge in the crop and avoid the pre-seeding knockdown herbicide due to this level of dormancy. Consequently, these weeds are more likely to be exposed to in-crop SU herbicides, hence the resistance. This is one theory, which has been seen in barley grass (paper) and ryegrass (paper), but there may be other explanations that we don’t understand at this stage.

Peter Boutsalis from the University of Adelaide leads the GRDC funded herbicide resistance project in Southern Australia. They have only recently added barley grass to this survey.

Ben Fleet, also from the University of Adelaide has also found a lot of resistance in barley grass in his survey of the Eyre Peninsula and the Upper North. Ben says that “it is almost impossible to control barley grass in pulse crops in some areas”. 80% of paddocks in the survey had barley grass, so it is very widespread. 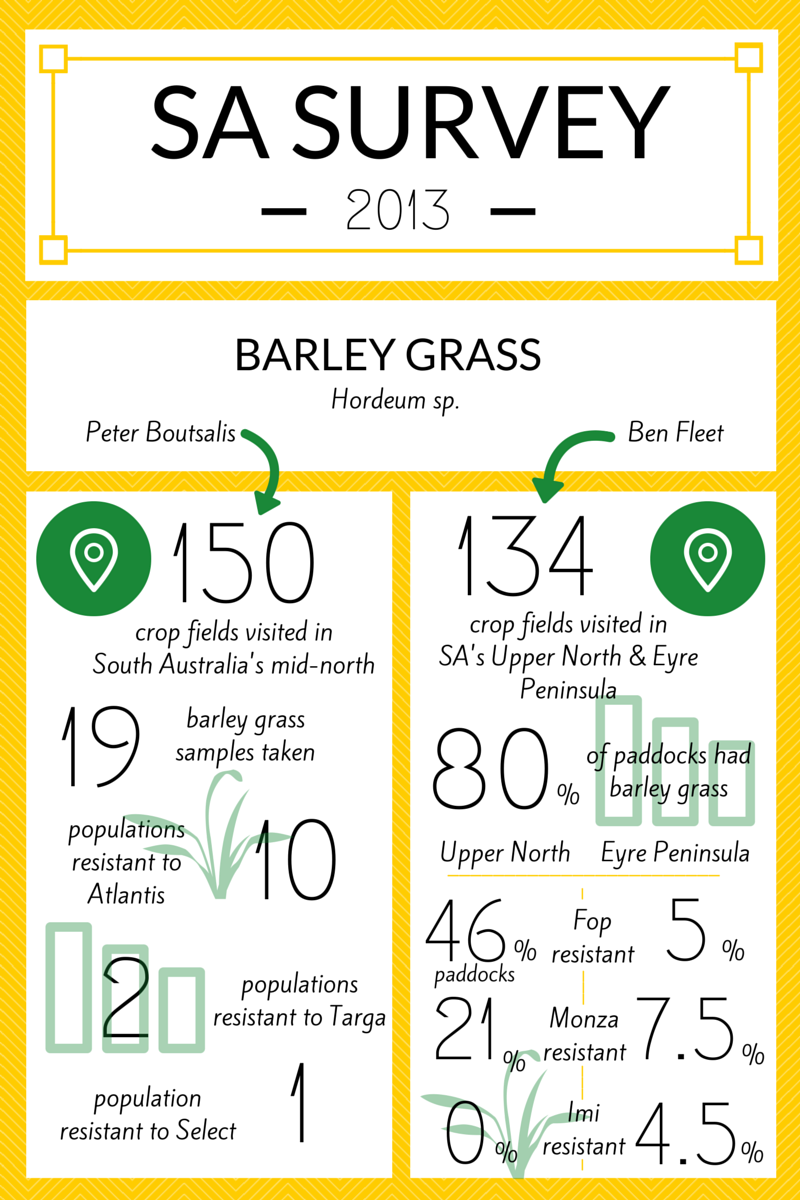 If low levels of resistance are showing up in random surveys then we can rest assured that a targeted survey will find much higher levels of resistance. In other words, there will be geographical hot spots where resistance levels are very high due to the farming system and the prevalence of the weed species in that area.

And so to the original question, is this discovery of SU resistant barley grass in Western Australia bad news or good?

It is bad news if your only answer to barley and brome grass is SU and IMI herbicides.

The fact that barley grass and brome grass evolve resistance more slowly than ryegrass is good news. With careful management, growers can keep alternative herbicides working for a long time, if resistance is detected early.

If you farm in South Australia, the news is bad. Barley grass resistance to Fop, SU & IMI herbicides is on the rise. This could be a sign of things to come in other parts of Australia.

Barley grass and brome grass resistance in Western Australia is not a horror movie, nor should we be complacent. This news is somewhere in-between. It is bad news, but it could be worse!

‘And it’s shocking me right out of my brain’, Skyhooks